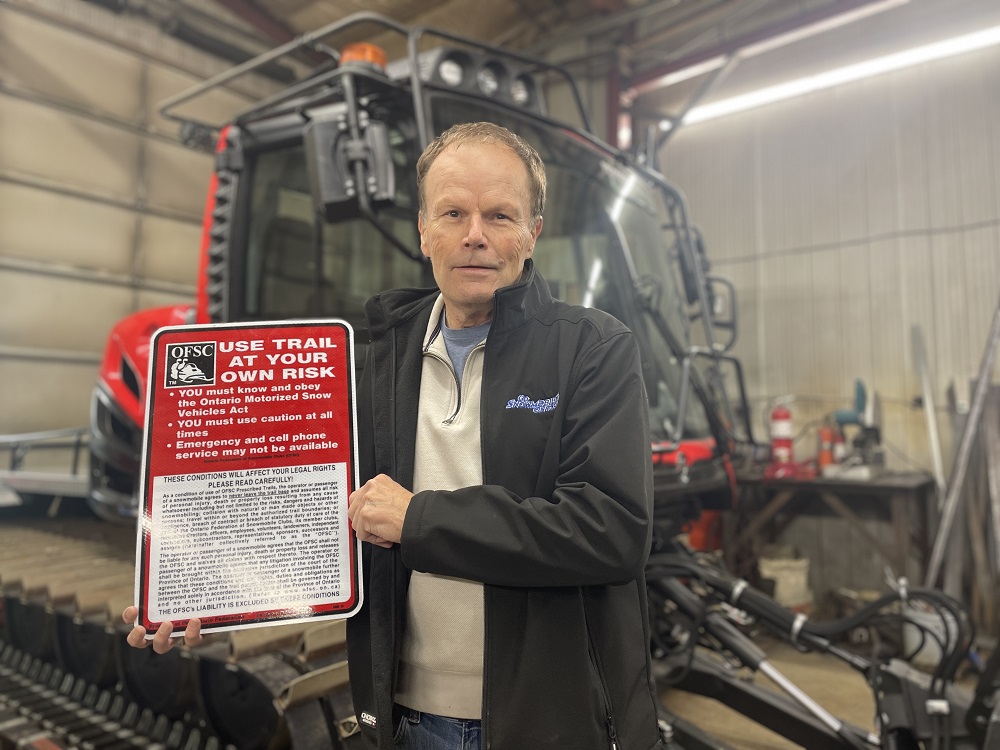 Both the Haliburton County Snowmobile Association (HCSA) and the Paudash Trailblazers have had to close or reroute sections of trail this year in response to landowner complaints.

“This one is a fairly easy fix. We were lucky,” Enright said

The Trailblazers announced in September a section of the 606 railbed trail near Gooderham was closed due to trespassing.

“This is the result of a few inconsiderate people using that section of the trail in the off-season who were causing damage, partying and [driving] recklessly past cabins…,” the Trailblazers stated in a Sept. 4 Facebook post. “Landowners in this area have told us that they have been subjected to harassment and threats and that they are concerned for their safety and that of their belongings and buildings in summer and in winter.”

The HCSA shuts down its interactive trail map in the off-season to limit use. Trails may look public or accessible to summer riders, but Enright pointed out it is still private property.

“The land is totally dormant. It is always in the care of our landowner or shut down,” he said. “We don’t want off-season use, period.”

“None of this is about our very good friends at Haliburton ATV Association (HATVA),” Enright said. “They’re the solution, not the problem. It’s rogue ATV riders who trespass. We invite all ATV owners and Side by Side owners to join [HATVA] and ride an organized trail system.”

Joel Bocknek, HATVA president, said inconsiderate riders “feel everything is wide open for their use. They’ll go off trail into wetlands with protected species and that’s not where they’re supposed to ride.”

The association has invested time and money into putting up signs, posting educational content on its website and coordinating with landowners on its trail system

He said trespassers can negatively affect a community’s view of off-road riders in general.

“When people start abusing something, those privileges disappear. Ultimately it will affect everybody,” Bocknek said.

Both he and Enright said the issue of trespassing seems to be getting worse. Enright said the situation has become “more challenging” through the years as Haliburton County’s population increases

Bocknek said COVID contributed as well. “We’ve seen through COVID the number of people partaking in off-road vehicles has increased tremendously. That in itself is creating pressure with landowners, or other people, who go out and are walking the trails.”

They conduct trail checks in the fall too. Haliburton OPP said no charges were laid this year.

“We are aware of the potential of some individuals to choose to trespass. As a proactive measure we target that audience through social media and count on important messaging such as this article to encourage them not to engage in trespassing,” said detachment commander Liane SpongHooyenga of the Haliburton Highlands OPP.

As for Bocknek, he said educating off-road users will remain a priority.

“We feel we have an obligation to educate,” he said.