The Haliburton Highlands’ Art Centre Foundation (HHACF) is set to unveil a feasibility study, charting the path towards a performing arts centre in Haliburton County.

Janis A. Barlow and Associates, consultants who’ve spent months preparing the report, will present it at the HHACF’s AGM Oct. 27 at the Bonnieview Inn.

It will include a rundown of possible locations of a large-scale arts centre, as well as an in-depth analysis of an arts centre economic impact to the surrounding area, possible uses for the building, management models, expected customer base, community usage forecasts and more.

“That brings into focus a dream that was pretty big and pretty vague,” said HHACF chairperson Daniel Manley.

“It’s a vital step towards fundraising and further engagement with local political leaders to bring the project to life,” he added.

“Government funders want to see a business plan. They want to see the thing being researched, and private donors want to see this legwork being done as well,” Manley said. He added the study will feed another that is set to dig into fundraising models that might get shovels in the ground

Centre would be about more than just the arts

On Sept. 26 the HHACF announced The Dennis Group will conduct a fundraising feasibility study and campaign plan. The company recently worked for the Canadian Canoe Museum in Peterborough, managing a fundraising campaign with a target of $45 million.

Not only will the feasibility study cater to more focused grant-writing and township council meeting presentations, but it will give Highlanders a glimpse into where such a centre could be located.

HHACF board members accompanied Janis Barlow and Associates consultants to numerous spots around the Highlands that could offer potential sites.

With a large-scale indoor performing arts centre, the HHACF say the Highlands is better positioned to attract bigger performances. However it wouldn’t be reserved for concerts and plays.

Board member Michael Clipperton said the feasibility study also goes into detail about technical requirements for the space and how it can be best outfitted for multiple user groups.

He said he previously joked it could be used for bingo but now, seeing the feasibility study, “it’s not unrealistic,” he said.

Drew Allen, also a board member, said he was similarly inspired by how the study expands the scope of what an arts centre could provide the Highlands.

“Now, listening to the consultants and talking to other members of our board and stakeholder groups, I can see probably another 10 or 15 uses I didn’t think were there,” Allen said.

The board said an arts centre would impact all of Haliburton County, not just those involved in the arts.

“Tourists who come here are a captive audience,” said Allen. “They have money to spend and time to spend it and are looking for things to do. A performing arts centre will answer that need.”

The public can register for the in-person meeting online via hhartscentrefoundation.ca/agm 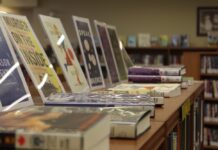 Call for artists with passion