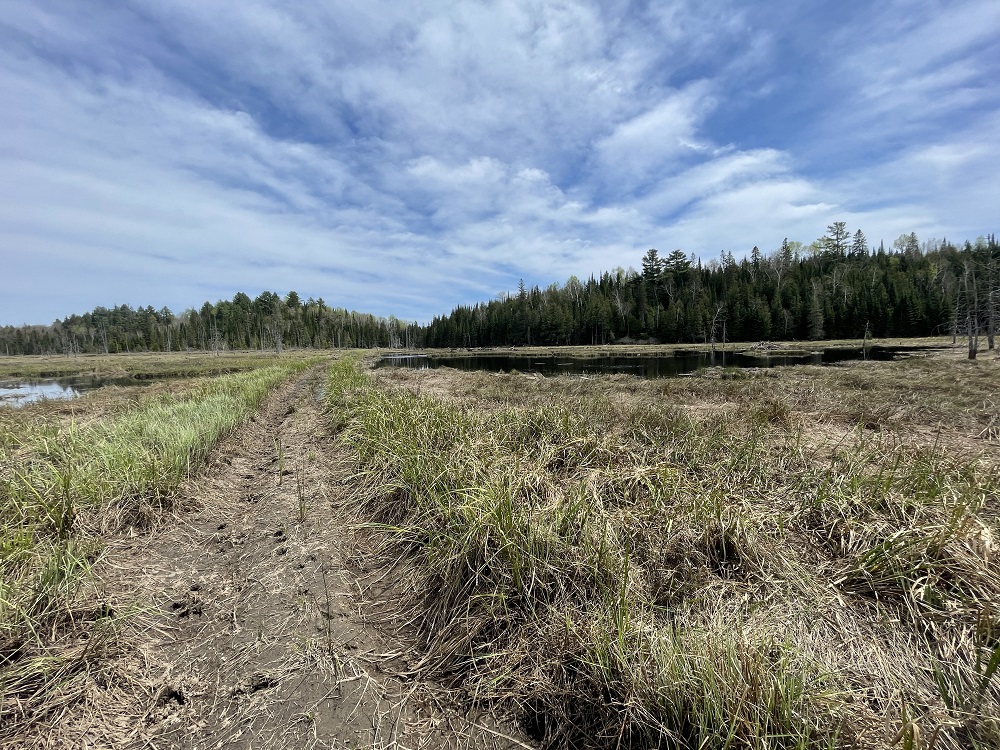 A petition signed by 454 people calls on Highlands East to ensure a trail remains multi-use and remove a beaver dam that blocks access to it.

“Many of those I represent here have literally been travelling the road since they’ve been born, and their ancestors before them,” said John Davidson, a representative of the Cheddar Road Organization for Trail Sustainability.

He presented a delegation on the petition to the Highlands East trails and outdoor tourism committee Sept. 21 and Highlands East Council Oct. 11, accompanied by 22 people.

The trail, which links Legacy Road and South Wilberforce Road, is blocked by flooding of the area due to a beaver dam built over the trail bed. Highlands East is currently seeking advice from the Ministry of the Environment, Conservation and Parks before deciding whether the trail remains multi-use.

It used to be a road linking the area to Peterborough, named the Burleigh Road. He added that the renamed Dillman Trail remains an important thoroughfare for snowmobiles, ATVs, horses and walkers. He said it reduces highway travel by six kilometres for trail users accessing trails south of Hwy. 118.

“Our highway traffic is ever increasing, making these trails more & more important for the safety of trail users and drivers alike,” Davidson told the committee.

The petitioners call on the township to remove one of two beaver dams, located on the trail.

“…The only reasonable step is to remove the secondary dam from the road allowance, during the fall while water levels downstream are at their lowest and not allow it to be rebuilt,” Davidson said. “The primary dam will maintain adequate water for the beavers and other wildlife.”

The Highlands East trail committee paused work on expanding the trail due to environmental concerns over the area’s wetland, which is adjacent to Crown land, in 2019.

Blanding’s turtles not at risk: MECP

In Spring 2022, The Highlander acquired photos that appeared to show a person dismantling the dam, which may be the habitat of Blanding’s turtles, an at-risk species. Therefore, damage or alteration of the habitat falls under the Ministry of Environment Conservation and Parks (MECP).

“The ministry consulted with the Ministry of the Natural Resources and Forestry to gather details of the complaint and surrounding lands,” said an MECP spokesperson.

“The MECP is not aware of any impacts to the Blanding’s turtles habitat. At this point we have completed our review of the incident. However, the ministry will remain vigilant and if we receive additional information, we may take further action.”

“The turtles in this grassy wetland have flourished for over a century of trail use. During those years, water levels were held below the top of the roadbed. In the last 40 years however, beavers have been allowed to rebuild the dam on this roadbed each time it washed out,” he said. “This has caused repeated flooding of the island and shoreline nesting areas.”

Davidson’s petition claims that “of those we polled there was overwhelming support for this and other multi-use trails.”

The Highlands East trails and outdoor committee did not respond to Davidson’s comments, however Highlands East council voiced their support for the idea.

Highlands East Mayor Dave Burton said he believed the dam removal could be doable. “I would certainly support you doing it with your group and there would be a few hoops we’d have to go through. Insurance would be one, liability would be one,” he said.

CAO Shannon Hunter said any work on the dam would have to comply with “environmental practices.”

Coun. Cec Ryall said he’d like to put together a letter of understanding to set up “rules of engagement” for how to conduct the work on the trail and area.

Coun. Cam McKenzie said he supported the idea but said it might be simpler for township staff to conduct the work. Council voted to move ahead with staff evaluating the dam and considering its removal.

“Now is the time when the water levels are low,” said Coun. Suzanne Partridge. “The sooner the better.”