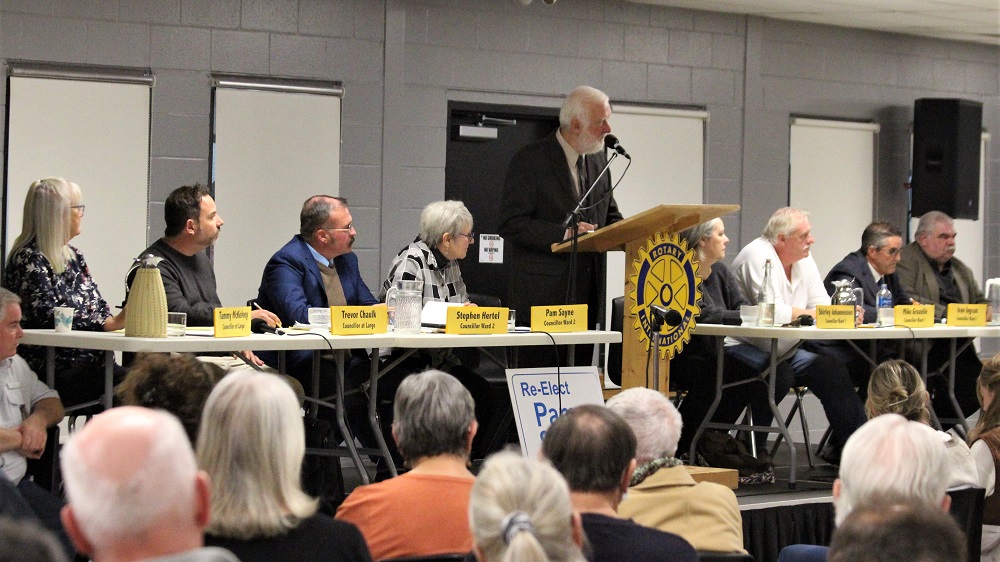 Facing a standing-room-only crowd of more than 150 people, eight Minden Hills candidates vying for election shared their visions and values during the Rotary Club of Minden’s Oct. 3 all-candidates meeting.

Nearly all mentioned housing as a top priority as they introduced themselves and their platforms in the community centre before 10 members of the public asked questions. Topics ranged from lake sludge to the closure of the local chamber of commerce office; Minden Hills’ inability to accept compost to candidates’ ideas for softening the town’s water supply.

The following are three paraphrased questions and candidates’ responses.

What do you hope to accomplish on council a year from now?

Shirley Johannessen, a ward 1 candidate, said she’d focus on roads, poverty and housing. “I would like to build homes and find homes for these people, it’s a spiralling thing that only gets worse for them.”

For councillor at large candidate, Trevor Chaulk, the question “boiled down to accountability.” He said housing will boost the township’s workforce and he’d pursue bylaw amendments to allow multi-residential builds in rural areas, as well as bringing planning and procurement back to local businesses.

Councillor at large candidate Tammy McKelvey said housing, “is affecting everybody.” She said she’d like to see zoning amendments for secondary dwellings. She said Minden Hills should take advantage of planning amendments to change building bylaws.

Ward 1 hopeful Richard Bradley said he’d like to see ground broken on new housing projects within a year. He said he’d want a roads plan which would see, “at the end of four years, everybody in this room could say ‘at least my road is okay.’”

Ivan Ingram, also of ward 1, said the first thing he’d do is, “check in to why 17 staff members have left in the last three years.”

He said he’d also focus on housing, particularly small lots and builds such as the Hunter Creek Estates, and hiring a planner.

Ward 1 candidate Mike Grozelle said he agreed with the points of his running mates, and that housing and political accountability would be his focus in the first year.

What will you do to make Minden Hills a more desirable location for young people to want to come and begin families here?

Sayne said the township is working on changing the planning act to allow more housing. “And it has to happen sooner.” She said Minden Hills’ housing needs are similar to many communities across the province.

“This is going to be a long-term goal,” said Hertel. He said better internet, education, job fairs and staff retention are key, since staff are leaving for higher-paid jobs elsewhere.

Chaulk said the township should look at the “fastest things we can do” to replace an aging workforce. “We’re all competing for the same people in the province.” He’d seek to enhance skills training for a “year-round” economy.

McKelvey said healthcare is the, “number one industry” in the Highlands, providing young people high-paying jobs. She added the township needs a living wage.

Bradley said, “this municipality is not paying the market wages for the jobs that they’re asking to fill.” He said this means young people will leave.

Ingram said small homes and partnerships with contractors to build them is the key. “Wages are top-heavy in the township,” he said.

Candidate Mike Grozelle said, “we need to pay people what they’re worth.” He said the township needs to hire the right person for the job for smart use of tax dollars, and supported a pay equity review.

Johannessen said she would pass on the question but wanted to gain more knowledge on the issue. In response to previous questions she said she wants to be a voice and to listen to concerns of local residents.

How will you help Minden’s downtown become more accessible?

McKelvey said accessibility is an issue and that will be tricky to fix in Minden where many businesses have stairways. She favoured reaching out to other communities for inspiration.

Chaulk said he doesn’t want accessibility upgrades to be, “on the businesses backs.” He wants to find ways the township could partially cover costs.

Hertel said accessibility is needed as quickly as possible. “It’s the cost of doing business, we have to do this for our community.”

Sayne said towns across Canada have changed their downtowns to be accessible. “We need to get the grants to do it.”

Johannessen passed on the question.

Grozelle said, “we’ll do whatever we can to help businesses get the work done.” He said sidewalks around town and pathways need work too.

Ingram said temporary ramps could be a fix, to help people navigate stairs. He said it was blocked by liability concerns. “Screw the liability, there is a liability in everything we do,” he said.

Space does not allow The Highlander to print all answers to all questions. Read in-depth profiles and listen to full-length interviews on thehighlander.ca.