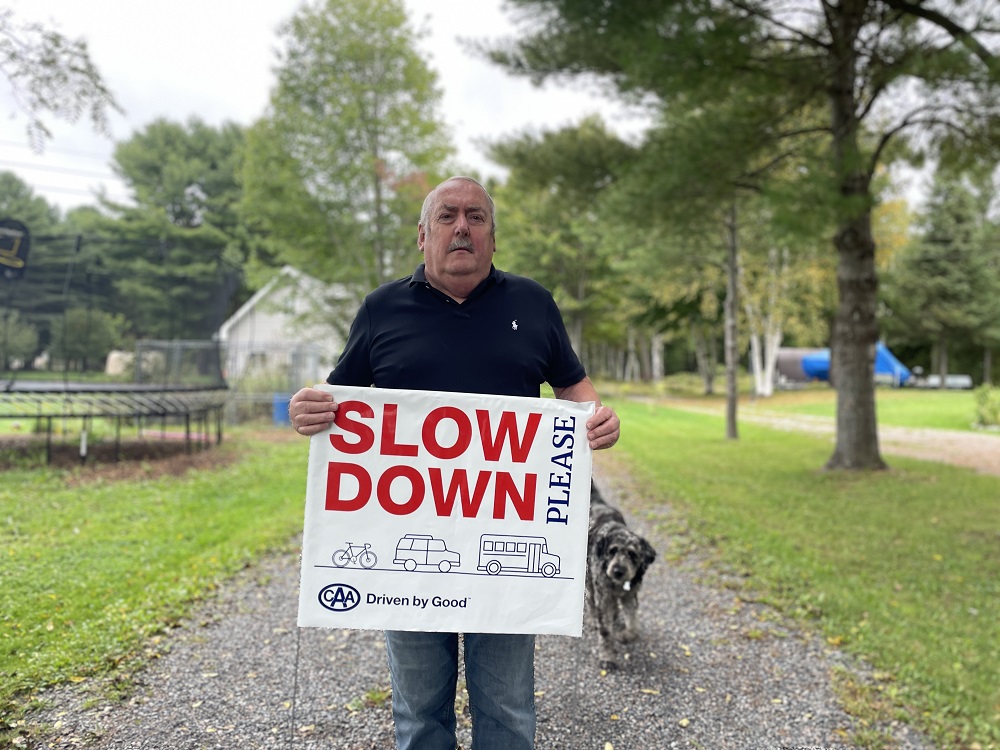 More than a dozen signs asking drivers to slow down have been taken from North Shore Road, leaving residents puzzled and distressed over local traffic speeds.

“I was bitterly disappointed and a little angry,” said Paul MacInnes, who helped secure “Slow Down Please” lawn signs from CAA in Peterborough.

After installing 16 up and down the road Sept. 15, MacInnes heard from multiple residents they seemed to be having an effect. However, they were all taken some time during late Sept. 17 or early Sept. 18.

MacInnes said he reported the issue to the OPP, who released a statement on Sept. 20 about sign tampering and theft.

“The Haliburton Highlands OPP recently received reports of the theft of election and community safety signage and would like to remind residents to be vigilant and make a report if you witness any such incidents to the police immediately,” said the OPP.

“Anyone removing signage without authority to do so could result in persons being charged with theft under $5,000.”

The MacInneses and 16 other families erected signs on the road after meeting to discuss municipal election issues at the beginning of September.

“The big issue that just kept coming up was the traffic and speeding on North Shore Road,” he said.

They’ve since asked the County of Haliburton for temporary use of digital speed alert signs, and have approached Algonquin Highlands about the issue.

MacInnes said one resident counted more than 200 cars driving by in an hour during the summer.

“The traffic volume is one thing, but the speed they’re going is another. A lot of cars are travelling at a very unsafe speed,” he said.

“I’m extremely familiar with every bump on that road,” she said.

Council recently denied a request to seek a change in the speed limit from 50 kilometres an hour to 40 on the road.

The fact CAA’s slow down signs are so widespread shows how speeding is a Canada-wide issue, she added.

“People think ‘reduce the speed limit and the problem will fade away.’ That’s not how it works.”

Moffatt said she’s requested the OPP conduct regular patrols on the road to deter speeders. She also encouraged walkers, cyclists and other road users to exercise caution and pay attention to their surroundings.

As for MacInnes and his neighbours, they’re considering other options to help decrease speed.

“We don’t want to go back to the CAA and ask them for more signs if they’re just going to be stolen again.”

Farmers markets back despite lockdowns