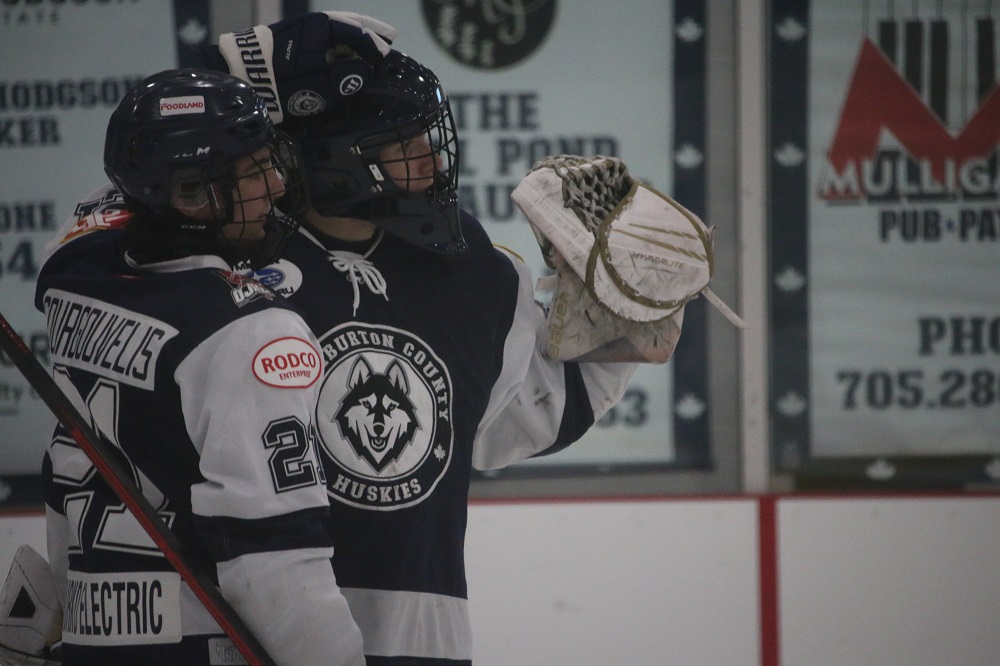 The Haliburton County Huskies made a huge statement during the opening weekend of the 2022/23 OJHL season, putting two rival teams to the sword and climbing to the top of the South/East Conference standings.

The Dogs got off to the perfect start Sept. 10 with a dominant 5-2 home win over the Cobourg Cougars, following up with a 5-3 road victory over the St. Michael’s Buzzers Sept. 11. Coach Ryan Ramsay was delighted to get four points on the board early and commended his new-look team for the way they approached the games.

“I’m happy to see things come together the way they did. We started a little slow [against the Cougars] but the guys managed to turn it around, played hard on the forecheck, moved the puck quickly and started to play Huskies hockey,” Ramsay said. “We knew we had a strong core coming into this season, but it was still great to see a lot of the new guys stepping up and playing well. The returning guys led by example. There were a lot of positives to take away.”

It was a packed house at S.G. Nesbitt Memorial Arena for Saturday’s tilt with the Cougars – a rematch from last season’s second-round playoff series. The Huskies quickly put the ghosts of that defeat behind them, taking the game to the visiting team in the early goings of the first. The top line of Patrick Saini, former OHLer Ty Collins and captain Christian Stevens saw lots of time, helping the hometown team take control.

It was a new face that opened the scoring, Alex Cunningham slotting home at 18:13, assisted by Lucas Stevenson and Myles Perry. The Cougars responded well to falling behind and, with the clock ticking down, tied the game with 14 seconds remaining in the period, through Tyler Hunt.

The Huskies picked things up in the second frame. They peppered Matthew Sbrocca in the Cougars’ goal, notching three quick goals late in the period through rookie Leo Serlin, Collins and Stevens.

They kept things going in the third but struggled to find an answer for a game Sbrocca. Hunt gave the Cougars a glimmer of hope, notching his second at 15:57 on a two-man advantage, but the Huskies held on. Stevens added a late empty-netter, giving him a three-point night.

“Couldn’t have asked for a better night. I think we showed how dangerous we can be with our speed, and we have scoring right through the roster – it was a big night for Leo, he’s only 16 so to get his first goal on his debut was really special,” Stevens said.

Winning in the big city

Saini made a statement in Sunday’s 5-3 win over the Buzzers, notching his second career OJHL hat-trick.

Two quickfire goals from Perry and Collins gave the Huskies a 2-0 lead heading into the first intermission, with Saini adding a third at the midway point of the second period. The Buzzers immediately hit back through Brandon Cohen, before Saini potted his second. Matthew Milic and Bryce Sutherland got on the scoresheet to make it a one-goal game, with Saini completing his hat-trick with an empty-netter in the final minute.

Stevens felt it was important to make a strong impression over the opening weekend, with the Huskies among this year’s favourites for the Dudley Hewitt Cup. The hometown side was ranked in the top five teams nationwide by the Canadian Junior Hockey League last week.

The Huskies will return to action Sept. 16 on the road against the Lindsay Muskies before hosting the Buzzers in Minden Sept. 17. Puck drop at S.G. Nesbitt Memorial Arena is 4 p.m.