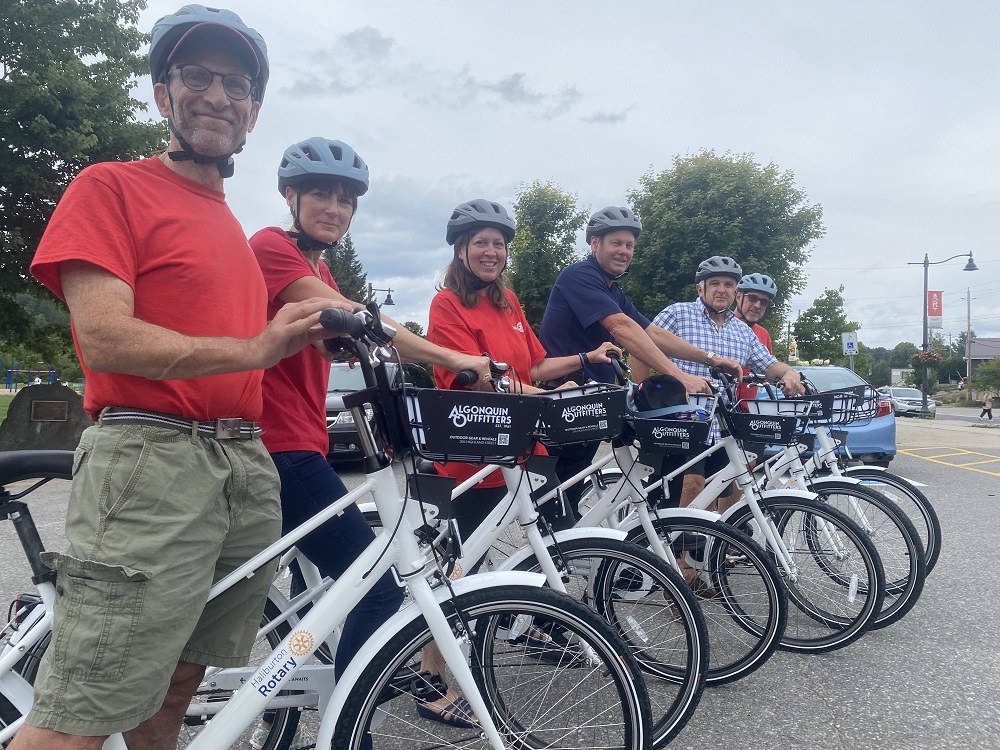 Haliburton Rotary is encouraging people to get outside and exercise following the launch of its new community bike share program.

Introduced Aug. 15, the initiative gives local residents and visitors aged 18 and older the chance to rent bicycles for free – providing an opportunity to further explore downtown Haliburton and nearby trails.

A passion project of Rotarians Irv Handler and Mike Landry, the bike share is intended to promote free outdoor activity and enhance Haliburton’s reputation as a premiere tourist destination. The pair were on hand at Head Lake Park Aug. 25 as the program was officially unveiled.

“I was about seven when my dad taught me how to ride a bike… I felt like I was a bird flying. I felt a sense of overwhelming freedom,” Handler said at the launch.

“Two weeks ago, when I took one of these bikes out for the first time, I felt that same freedom. I’m just happy now that everybody in Haliburton has the opportunity to experience that same sense of freedom.”

Six bikes will be stationed outside the Haliburton Welcome Centre from mid-April to the end of October. People will be able to take bikes out during daylight hours, currently between 8 a.m. and 8 p.m. A smart phone is required to sign a waiver and input credit card details to unlock the bikes. This is simply a precautionary measure, Handler said, with cards only being charged if bikes are damaged or not returned.

Individuals will be able to check out a bike for up to three hours.

The program has been quite popular since soft launching earlier this month. Handler noted there had been 72 rentals between Aug. 15 and 25.

Haliburton Rotary has invested approximately $16,000 into the bike share. That’s covered the cost of the six, seven-speed bikes, six Bluetooth electronic locks, three double-bike docking racks and the development of a smartphone app.

Algonquin Outfitters has partnered with Rotary on the project, providing ongoing maintenance of the bikes.

Mayor Andrea Roberts said this latest Rotary initiative was a big win for the community.

“Here we go again, another ribbon cutting for another great Rotary project… This is such a wonderful opportunity for tourists and people that come to town and don’t have their bikes. I absolutely love that it’s free,” Roberts said. “I’m a big cyclist and love to ride my bike around… This is a great addition to the park.”