Home Arts Exploring a matter of blood and beans 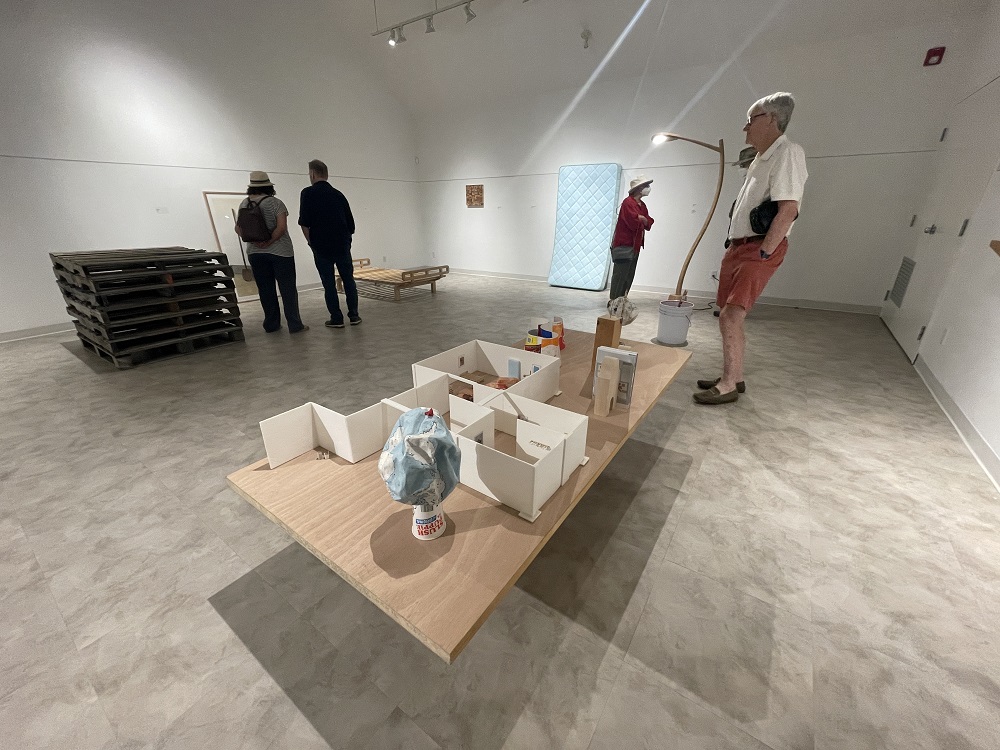 “There’s been blood in our work for a while,” said artists Hendrika Sonnenberg and Chris Hanson.

They gaze down at a sawed-off hockey stick half submerged in a white plastic bucket of oozing murky red liquid.

The work’s inspiration is also its namesake: Bucket of Blood is a 1959 comedy horror movie about an avant-garde artist who accidentally plasters a dead cat into his art. After critical acclaim, he begins doing the same with human bodies.

“It’s the relationship with the artist, with violence,” said the artists, who prefer to be quoted together.

Places Count, which debuted Aug. 27, contains no trace of the same violence. But just like the film, their sculptures explore myriad secrets hidden in plain sight.

“They’re things on the periphery we always live with. Things we take for granted,” the creative collaborators said.

And whether it’s a rabbit splayed out across asphalt or a grid of wooden fragments foraged from detritus destined for a landfill, the pair’s work is linked to the landscape.

That rabbit’s untimely demise on a County road echoes throughout the Agnes Jamieson Gallery. A paper model of it dwarfs a miniature diorama of the gallery itself.

“The whole idea of scale is really important… seeing the model, and seeing the bunny taking up more space. All that sort of back and forth,” they said. On the wall, the bunny’s paper shape is no bigger than a crumpled piece of waste.

Visitors walk past a bucket of nails and a bag of beans. Only the nails have fulfilled their function, pulled from the pallets, which are stacked in the gallery’s main room. The beans? They’re handmade, all 17,000 of them, but as lifelike as any you’d stir into chili.

“We kind of like that,” said the artists, noting that many might never know they’re manufactured. “It’s a weird kind of glitch.”

In a book on the exhibit, Sonnenberg and Hanson write that “not unlike our city interests, our eyes often drift to what’s plain, but maybe at the margins of what is before us. We miss the city too.

“But as people whose occupation is centered on getting their hands dirty, we’re pretty happy to work with what’s in our own yard and put to bed the idea of having to shop at the store for materials.

The show is an exploration of things, materials and detritus found at places we know. Places that count.

Yet Bucket of Blood, much to the relief of many visitors, is fabricated with corn syrup and a healthy dose of food colouring.

Places Count runs until Oct. 26 at the Agnes Jamieson Gallery, which is open 10 a.m. to 4 p.m. Tuesday to Saturday

The Breakfast Club comes to Haliburton