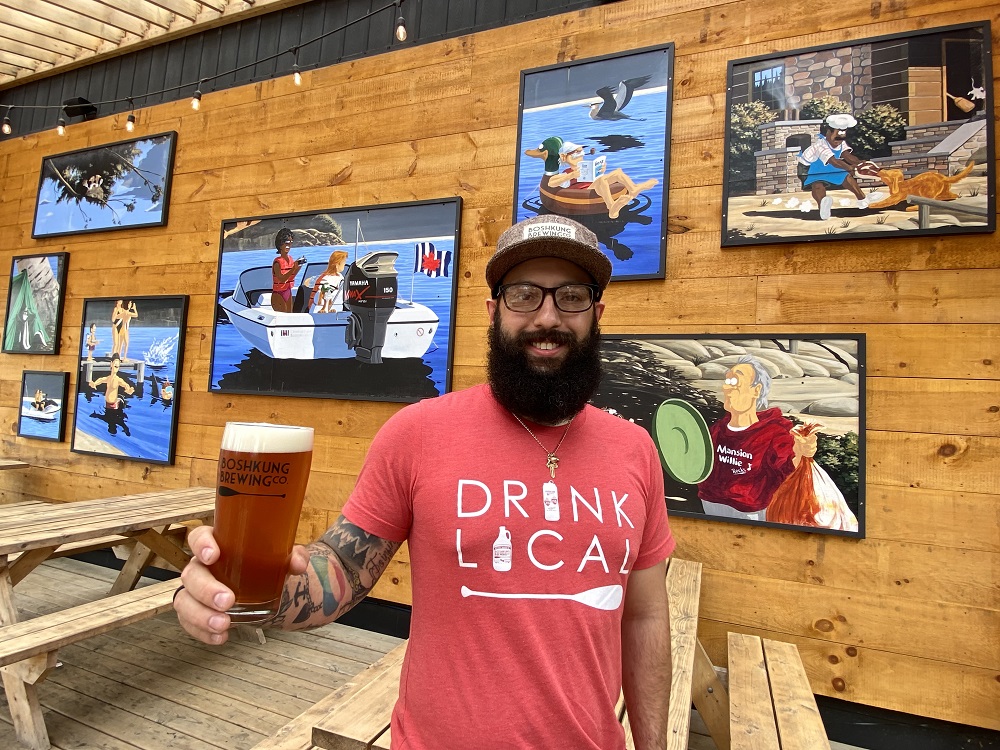 Twenty-two years on and the iconic ‘The Cottage’ mural that lived on the walls of a popular downtown Minden destination has been given a new lease on life.

The artwork, completed by renowned Highlands artist Robert van Nood in 2000, has been reimagined to play a central role in Boshkung Brewing Social’s recent renovation. Now, instead of filling the wall along the Water Street building, parts of the mural have been separated and framed to form something of a new story, said manager Mathew Renda.

“We decided last year to do some work on the building and we looked at the mural and wondered if we could save it, so we brought the artist in and unfortunately didn’t get good news. He said it had been up a long time, and having been exposed to the elements, it really wasn’t salvageable,” Renda said.

He initially toyed with the idea of commissioning a new mural, but felt strongly that it was worth looking into other, more creative options to ensure the original piece lived on.

Renda and his team carefully removed the mural last fall. They took it to a nearby storage unit and tried to piece the panels back together. The team managed to recover eight sections of the original mural, which were then cut up and framed. On June 4, they were reintroduced to their old home.

“Really, we just tried to piece together a nice story… That original mural was so iconic. It screamed everything that makes Minden and Haliburton County so great,” Renda said. “We kind of inherited the mural when we bought the building, so we thought it was our responsibility to save it.”

The gallery hangs along the brewery’s new covered patio. It features some of Renda’s favourite scenes from the original piece, including a dog fighting with a chef over a steak, a skunk camping in a tent, and people having fun jumping from a dock into water.

Renda said the community seems to like what they’ve done with the space.

“The day we hung it all up we had people driving by and stopping… We had a lot of questions asking what we did with the mural after we took it down, so I think people are just excited to see it back up in some way,” Renda said. “The old mural, honestly, was kind of falling apart in some areas, so we’re very happy that we’ve been able to maintain what we have and give it a bit of a new life. It’s such a well-known piece locally, and really embodies this community. Now hopefully it will last [another] 20 years.”