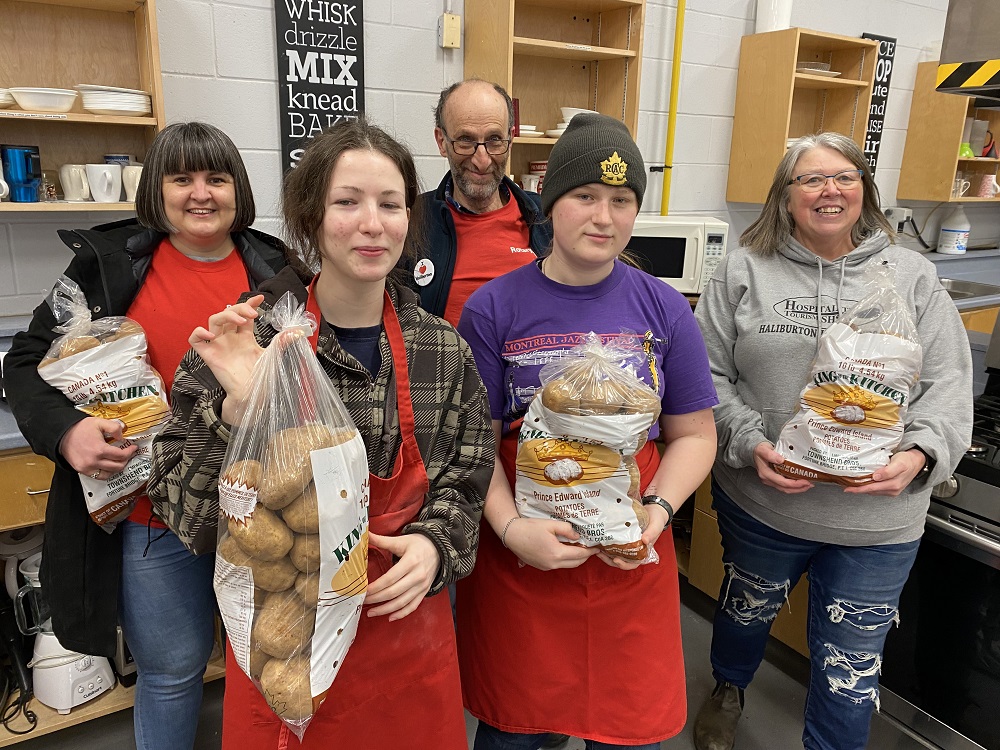 More than 8,300 pounds of potatoes were delivered to Haliburton last week as part of an inter-provincial effort to distribute excess spuds to groups and households that can use them.

Coordinated by Second Harvest Canada and Rotary District 7010, the effort, funded by the federal government, has seen more than 290 million pounds of surplus potatoes from Prince Edward Island diverted to processors, packers, dehydrators, food banks and other markets to avoid them being wasted.

Farmers have been storing the excess potatoes after the U.S. government banned the importing of PEI potatoes last fall. That came after a potato wart was found in a PEI potato farmer’s field. Typically, around 80 per cent of all PEI potatoes are exported to the U.S.

While potato wart poses no threat to human health or food safety, the soil-borne fungus can reduce the yield of a potato crop and make potatoes unmarketable. It can remain dormant in a field for more than 40 years.

Local Rotarian Irv Handler took the lead on this project. When he heard there was practically an unlimited amount of potatoes available for delivery, he started making the rounds.

“I called everyone I could think of – churches, schools, our food banks. In the end, we secured 8,337 pounds of potatoes, which I think is really good for little Haliburton,” Handler said. “I definitely think we did the most potatoes of any small town our size.”

Handler was joined at Haliburton Highlands Secondary School by fellow Rotarians Heather Phillips and Maureen O’Hara March 25, as he orchestrated the delivery of 1,000 pounds of potatoes to the school. Minden Hills mayor Brent Devolin assisted with the delivery.

Teacher Darla Searle said the potatoes would be used in her cooking class, and that she already had plans to cook up large batches of potato soup. Bags will also be offered to students to take home.

On March 26, the Rotary club held a potato pick-up event at Head Lake Park. Anyone from the community who showed up was offered a free bag of potatoes.

A delivery of 2,250 pounds of potatoes will be made to The Good Food Box April 21. Those potatoes are currently being stored at Park’s Foodland in Haliburton.

“It’s a great initiative, and it has definitely been popular here in Haliburton. Whether that’s good, I don’t know. I think it suggests we’re a community in need,” Handler said.