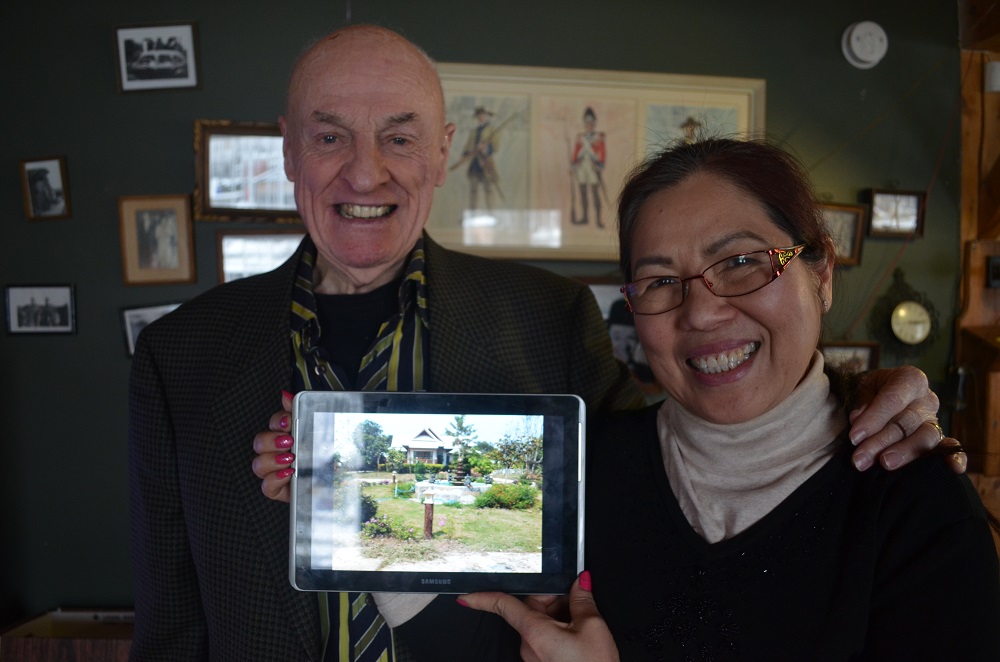 On the Friday before he died, Ron Gambell spent nearly a full day downstairs in the antique store and restaurant he shared with wife Suwan Khamduang.

It was unusual as his illness often kept him in the couple’s upstairs living space.

However, on March 4, he sat in a chair near the fireplace most of the afternoon and early evening and continued to try and sell antiques online while waving at people outside coming for takeout.

“That day, he sold about four pieces. He never stopped selling,” Suwan said with a chuckle, reminiscing on her partner of 22 years.

Suwan said Gambell didn’t care about the money at that stage. The selling was simply in his blood and he enjoyed it.

Gambell died March 6 at home. The businessman, former municipal politician, Rotarian and booster of all things Minden was 89.

He started his career as a salesman with General Motors before opening Gambell Motors and then Gambell Antiques and Tea Room in Minden, now Suwan’s Thai Restaurant.

Suwan said she chose well when she and Ron became business and life partners in 2000. She said he taught her a lot about the business world as well as Canadian culture. Suwan had come to Canada in 1994. She is planning to stay in the community and continue running the restaurant while scaling back the antiques side of the operation.

“I told Ron I’m going to stay here. This is my home. I feel love in this town,” she said.

She said the other gift Ron gave her was allowing her to be herself. He never wanted to change her. He also shared a love of her Thai culture. They visited together last in 2017. He wanted to go back but age and illness did not allow it.

“I miss him because we spent time together so much and I miss cooking for him. He enjoyed that.”

Former municipal councillor Jeanne Anthon met Gambell after moving to the County in 1991 and running for office. She said the former reeve of Lutterworth Township and Haliburton County warden reached out to her early in her campaign to find out what kind of politician she might be. It was the beginning of a long relationship, “I believe of mutual respect. I certainly appreciated his history in the area and he had an excellent memory so that was a real plus.

“He really wanted to put you on the right path with the best knowledge of the community and what the issues might be, so I consider him a kind of a sage for the community. I certainly respected his opinions and felt that he always had the best interest of the community at heart.”

Anthon said she admired his attitude about competition.

“He considered competition a grounding to make Minden a destination. In other words, he loved to have other antique shops in the area because Minden was the destination for antique shops and that would only help his business. I appreciated the wisdom of that.”

He was also instrumental in getting the first women to join the Minden Rotary Club when he invited Anthon and Shirley Kuni to join the male-dominated ranks.

“There was resistance and he fought the resistance,” Anthon said. Later she said members commented it was the best thing that ever happened to Rotary.

“Ron saw potential and went with it. He respected women and he knew that given an opportunity we could provide strength and opportunity in communities.

“The more dynamic the community, the bigger the smile on Ron’s face. He really liked to see events and activities that demonstrated the strength and livelihood of a community. He was a very positive person. In spite of any challenges, he seemed to find the positive.”

Jim McMahon was another reeve of Lutterworth, and proprietor of what is now the feed store in Minden.

“As soon as I arrived, Ron came over, welcomed me, and we hit it off, just bang. He was a great guy, supported new businesses.”

McMahon said he was also “quite the character.” He recalled how Gambell was first reluctant for Suwan to establish a Thai restaurant in the County, thinking the cuisine would not fly. But he came around to the idea and it has been a huge success.

“He was a real champion for Minden and promoted Haliburton County.”

A Celebration of life will be held in the fall at Suwan’s.