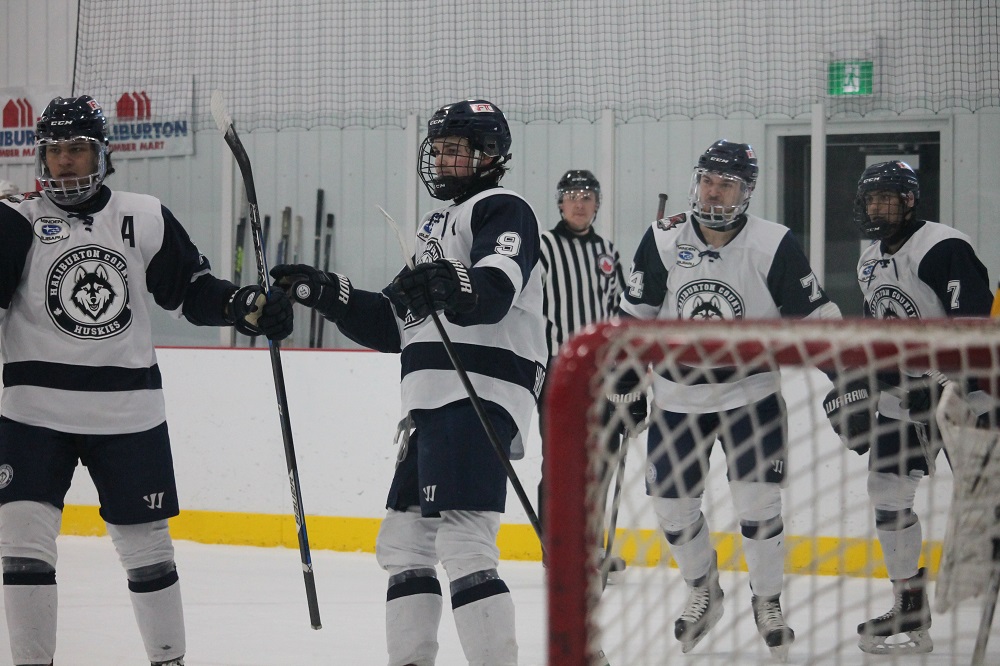 The Haliburton County Huskies finished off an impressive weekend of OJHL hockey March 20 when they easily handled the struggling Caledon Admirals 7-1 at the S.G. Nesbitt Memorial Arena.

It capped off a three-day home stand in which the Dogs mauled the Mississauga Chargers 9-3 March 18 and squeaked past division rivals, the Trenton Golden Hawks, 2-1 on March 19.

The wins gave the Huskies a record of 27-14-1-4 on the season, putting them just one point behind Trenton and four points behind East Division leaders, the Wellington Dukes.

“It’s great,” coach Ryan Ramsay said of the wins and a seven-game victory streak. “Our boys are playing really well.

He added, “We’re pretty dialled in with the systems that we’re doing which is what you want this late in the season with the playoffs right around the corner. They are wanting to win and adjusting well.”

The points against Mississauga and Caledon were expected but Ramsay was most pleased with the Trenton match. He said his boys played a sound 60 minutes and didn’t give the Golden Hawks much. He also praised the play of goalie Christian Linton.

Linton got the weekend starts as Christian Cicigoi was out with a lower body injury and the coaching staff wanted to give him the time to be fully recovered heading into the playoffs. Having a duo going into the post-season is a bonus for the Dogs. Not all teams have that one-two punch.

The coach was also happy to see players get their names on the scoresheet with the 18-goal weekend.

“Everyone’s getting chances, which is nice. We went through a tough stretch where we didn’t score too many and guys were holding their stick a little tighter, thinking ‘what should I do here, what should I do there’ and I said ‘just do the same thing you’ve always done. You’re here for a reason. Do what got you here. Don’t change it because you’re not scoring. You’re getting chances’.” Ramsay said his players have got their confidence back.

After a scoreless first period against the Golden Hawks, the Dogs got on the board when Sam Solarino scored at 6:17, assisted by Cameron Kosurko. Then, it was Christian Stevens’ turn, bulging the twine at 13:20 with helpers from Schaly and Nick Athanasakos. Trenton fought back for one in the third, with Aiden MacIntosh firing the puck home at 6:16, but the Dogs held on for the all-important win.

On Friday night, the Huskies came out strong against the Chargers. They scored nine goals in the first two periods with Oliver Tarr recording a hat-trick.

The Dogs scored five unanswered goals to start the first period, beginning with Tarr at just the 24- second mark. Other first-period goal scorers were Bryce Richardson, on the powerplay, Joe Boice, Jonah Cochrane, Tarr again and Isaac Sooklal. The Chargers got one back but the period ended 6-1 Huskies.

The Huskies scored another three in the second frame: Payton Schaly, Tarr on the power play to secure the hattrick and Sam Solarino. The Chargers managed to get two past Linton and the third was scoreless.

Against Caledon Sunday, the Huskies made it a six-point weekend with an easy 7-1 victory.

Jack Staniland opened the scoring at 5:10, then Tarr got his fourth goal of the weekend at 16:38.

The Dogs stormed out in the second period. Lucas Stevenson scored just 58 seconds in then Stevens potted one at 1:12.

Caledon made it 4-1 on a powerplay but the Huskies were far from done. Stevens scored his second of the period and Lucas Marshall also joined the goal parade. Rose scored in the third.

In a rare afternoon game March 23, the Huskies defeated the Chargers 4-0 to extend their winning run to eight games. Payton Schaly recorded a hat-trick in the road game, while Oliver Tarr notched his 32nd goal of the season.

This coming weekend could be the Dogs’ biggest test of the season as they host Wellington March 26 and Trenton March 27.

Ramsay said the Dogs are having more success with Trenton than Wellington at the moment.

However, he said they’ll have to play both to get out of their division come playoff time. He said it’s a good test, really good games and exciting hockey.

“It’s exciting. We had great crowds all weekend. People are really supporting us and having fun at the games. It’s great to see.”

Board backbone of Storm