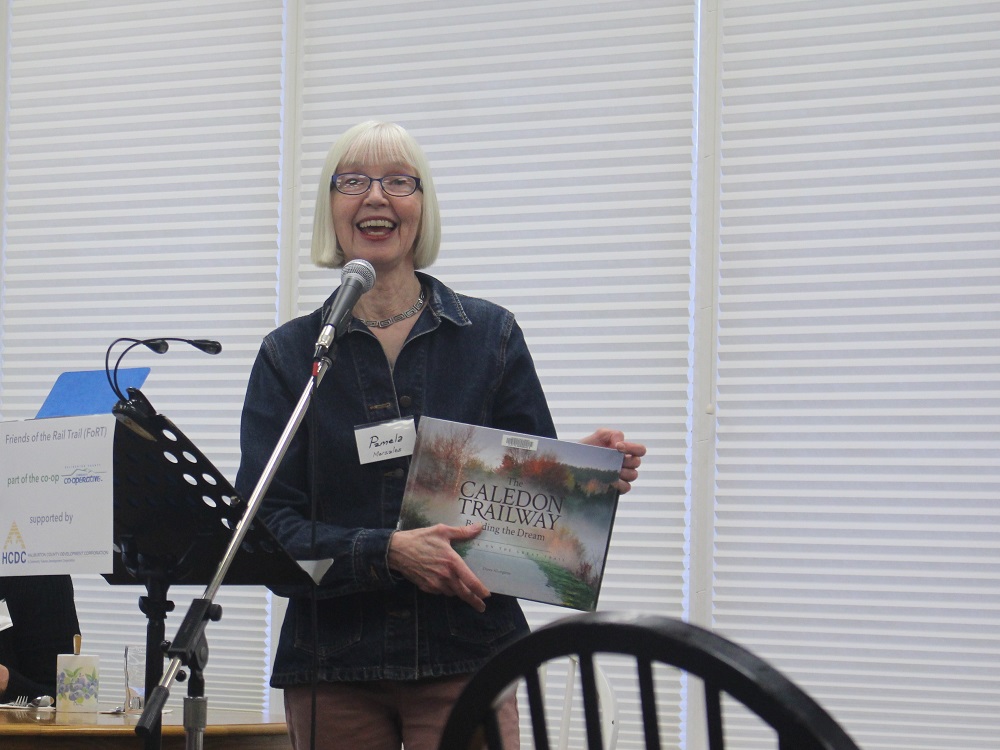 It was a blustery winter night at Camp Wanakita in February 2007.

Eighty-five people attended a community supper that sparked a new Highlands organization, The Friends of the Rail Trail (FoRT).

Chairperson Pamela Marsales described the night 15 years later at another community supper, this one to celebrate the group’s 15th birthday.

“We just came up with the slogan ‘connecting community and rail trail,’ and that’s what we’ve been doing ever since,” she said,

The dinner at SIRCH was titled “It Takes a Village,” a name which Marsales said is the theme of FoRT’s anniversary year.

The “village” has been a central part of FoRT’s history.

“We try to animate our community public green spaces by bringing history to life, and encouraging an appreciation of our natural habitats,” said Marsales in a prior interview.

The group made two documentary films sparked by an open mic at the first dinner at Wanakita. FoRT recorded people’s accounts of the railway’s history. DVDs of the documentaries quickly sold out.

“Every time we screen them it’s been to a standing-room audience,” Marsales said.

Inside a thick blue binder, Marsales has collected notices and flyers for dozens of FoRT events throughout the past decade and a half.

“Dark skies in the Lochlin Flats,” for instance, brought more than 77 people to a sparsely populated section of trail late at night in 2010. Alongside retired astronomer Dr. Carl Bignell, attendees gazed at the fiery Perseid meteor shower, sipped coffee and munched on desserts.

“It was a huge success,” said Marsales. FoRT has held art walks, countless bike rides, farm tours and even a canoe outing beside the IB&O rail bed during its 15 years.

Ute Wright, who helped found the group, said the trail has been a way to meet people in the community and relax amid nature.

“It was a link to the wider community,” she said at the March 6 event. “I learned about railway history, nature, community and pioneer history.”

Throughout its history, FoRT has been supported by the Haliburton County Development Corporation local initiative program.

“It’s one of those really great examples of a community resource that continues to need a bit of a [financial] injection. The energy Pamela has put in over the years is very admirable,” said HCDC program coordinator Heather Reid.

For the group’s 15th year, they’re planning 15 “Sunday Rambles,” starting March 27 at the town docks on Head Lake at 11 a.m. They’re suitable for families, pet owners, and people of all physical abilities.