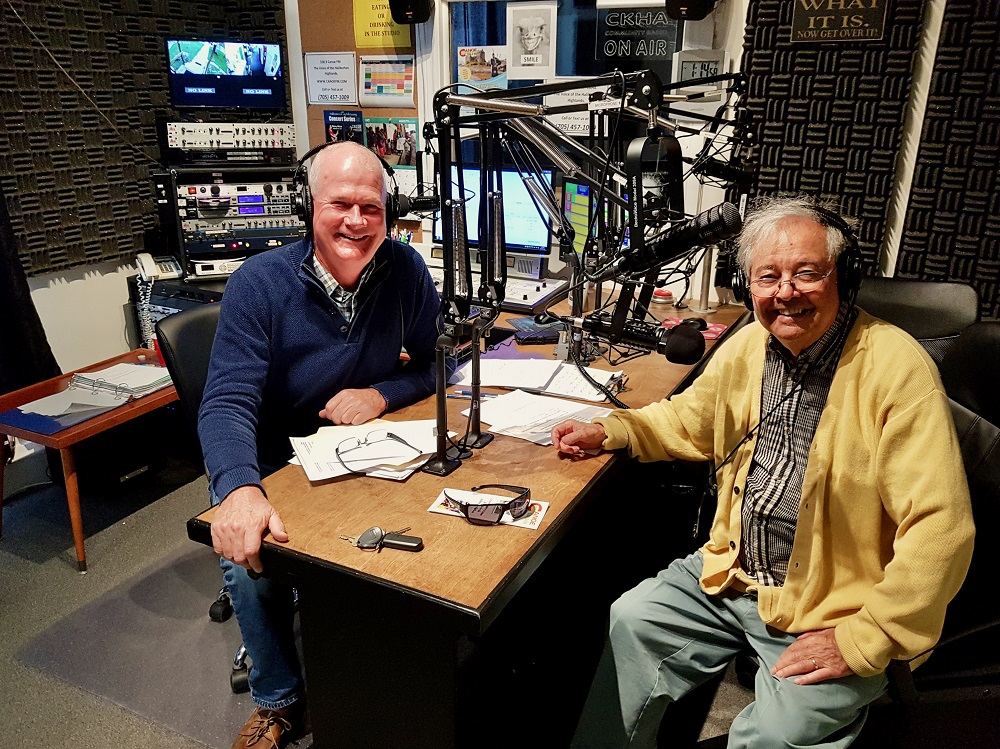 “The happiness of every country depends on the character of its people, rather than the form of its people,” rings out the voice of Kenneth Bagnell in a CanoeFM radio vignette.

It’s a quote from Thomas Haliburton, the County’s namesake and the focus of one of the dozens of short reflections Bagnell broadcast over the community radio airwaves for half a decade.

Bagnell, a former journalist, celebrated author and devoted United Church of Canada minister, died Feb. 15 at age 87. Bagnell was known around the County for his short recordings, written with care and recorded at CanoeFM with producer Ron Murphy.

“He was an excellent writer,” said Murphy. Bagnell would arrive at the station in the summer with stacks of written papers, some about history some about the present day, all geared towards the seasons.

“Bagnell moments,” as Murphy said they became known, were played nearly every day until a couple of years ago when Bagnell’s Alzheimer’s disease progressed.

Bagnell’s cottage on East Moore Lake was his introduction to the County, said his son Paul Bagnell. He arrived after a lengthy career at Canada’s top news outlets such as the Toronto Star and Globe and Mail, as well as editing the United Observer, the Imperial Oil Review and the Globe Magazine. He also anchored a CBC news show.

“He was a gifted storyteller, and he had a great capacity for the English language,” Paul said.

As the assistant to the editor of the United Observer, Bagnell had the chance to interview Dr. Martin Luther King Jr. who spoke on the civil rights movement sweeping across the United States in 1962.

Later in life, Bagnell penned multiple books. The Little Immigrants: The Orphans Who Came to Canada told the story of 100,000 impoverished children from the UK who were sent overseas, many to Canada. Bagnell’s investigation shone a light on a slice of Canadian history that had rarely been discussed. Paul said many of the immigrants, who at that point were elderly, found the book to be “essential reading all these years later, for Canadians interested in that part of our history.” Paul said it’s likely that book was one of Bagnell’s proudest achievements as a writer.

Dave Bagnell said his father wasn’t much of a cottage person, coming from downtown Toronto. However soon after the family purchased their cottage, it became a fixture in their family’s life.

“We never thought dad would take to it: as soon as he got a taste for it, he really fell for it,” said Dave.

In 2014, Bagnell approached the station with the idea for “Ken Bagnell moments.” In the years following, Murphy helped him record dozens of vignettes, as Bagnell was diagnosed with Alzheimer’s disease. As his memory declined, Murphy continued to receive recordings.

Dave said Bagnell enjoyed researching and preparing topics for the radio stories. “Anything dad would do he would research it. He would give a lot of thought, and that was his style, very retrospective,” he said.

Many radio listeners will remember Bagnell’s contemplative views on Haliburton life, history and holidays, broadcast throughout the Highlands.

His family said they will remember a man with a strong faith and integrity, who always devoted time to family.

“He was the best father we could have asked for,” said Paul. “He never gave short shift to his family