Home General News Adoption can be a ‘torturous process’ that brings the greatest gift of... 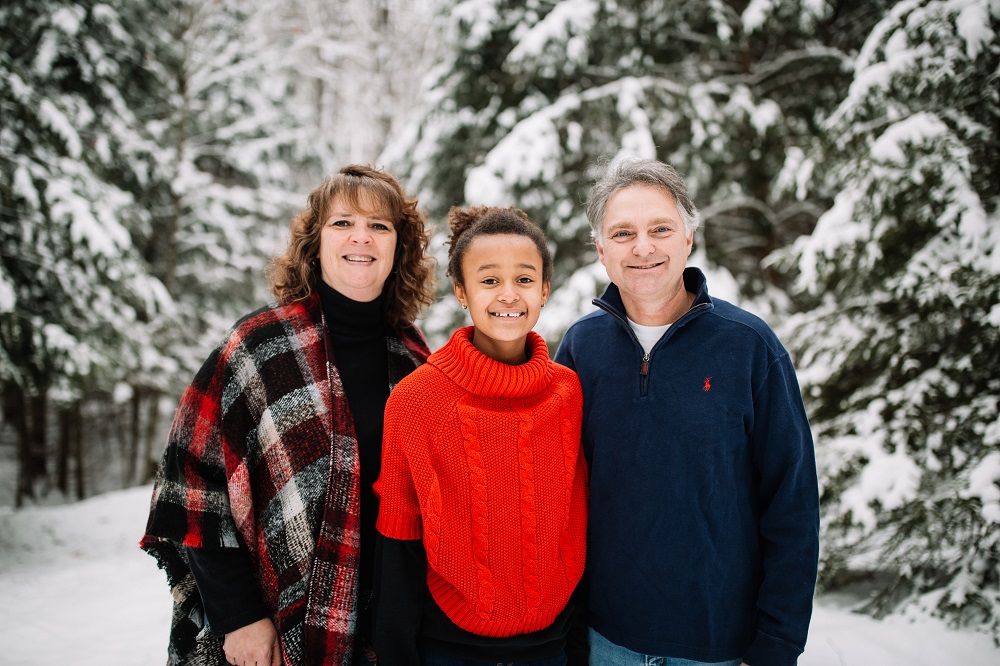 Erin Neimann and Doug Rowe were desperate when they contacted Durham Children’s Aid Society in 2006. Approaching their 40s and having exhausted all possible ways of biologically expanding their family, the couple turned to adoption.

Living in Whitby at the time – but now residents of Haliburton County since 2012 – they set out on their journey. Feeling unprepared, they hired a social worker to help them navigate the system.

“The first three months were spent just filling out paperwork. Then CAS came in and did their investigating. After that, it was months and months of training,” Neimann recalled. “At that point, we really didn’t have any idea what we were doing, or what to expect.”

Karen Kartusch, regional adoption program manager with CAS Durham, Highland Shores and Kawartha-Haliburton, said the initial vetting process is extensive. It can take up to a year. Home studies, criminal record checks, financial inspections, health check-ups – all a necessary part of the process, she said.

The Kawartha-Haliburton region approves around 20 new families per year. At any one time, the organization has around 175 children under their care. Kartusch noted only a small number of those, between 35 and 40, are considered to be in Extended Society Care, which means CAS has become their legal guardian.

The organization’s primary goal, Kartusch said, is to have children return to their birth home when possible. Only when that poses a safety risk to the child, and often after several years of going through the courts, does that transfer take place.

“We do not have many very small children. People, when they’re considering parenting, think of scenarios where they’ll adopt a baby through CAS. I can tell you, that is incredibly rare,” Kartusch said.

Based on numbers from 2019 and 2020, 78 per cent of children placed in new homes by CAS Kawartha-Haliburton were aged three and older, while almost 25 per cent were at least eight.

When Neimann and Rowe started, they wanted an infant. As time went by, they relaxed their expectations. They attended CAS adoption resource exchange conferences in Toronto, where they made connections with social workers representing children. There were video presentations showcasing children available for adoption. Those events were difficult for Neimann.

“Some of the most emotionally draining experiences I’ve ever been through in my life,” she said. “Sitting there and watching kids talk about themselves, and almost trying to sell themselves. Talking about how all they want is a family of their own. It just broke my heart.”

They came close to adopting three sisters, but were passed up for another family. Refusing to put herself through that experience again, the pair considered alternative options.

“Very difficult to find, and you can be waiting a lot longer,” Neimann said.

Families are asked to fill out a profile outlining why they would be good parents. It’s shared online and available for adoption caseworkers to share with clients.

Deciding to go domestic rather than international, Neimann submitted a profile in spring 2008. Several months went by without a word. Then, on Thanksgiving weekend, Neimann got the call she had been waiting for.

“Our worker became aware of a girl who was pregnant in Thunder Bay. The family that had agreed to adopt her baby changed their mind at the last minute, so she was looking for a new family,” Neimann said.

Neimann and Rowe flew to Thunder Bay to meet the woman and her case worker. It was agreed they would adopt the baby. Freyja Neimann-Rowe arrived on Nov. 11, 2008.

Neimann and Rowe opted for an open adoption, and have been honest with Freyja about her background.

Georgia Shank’s experience with CAS, while “beyond invasive” was quite straightforward, she said.

The Minden resident was contacted in 2014 after her biological nephew was taken into CAS custody. A single mother with a two-year-old daughter, she wasn’t sure she could handle another toddler while juggling a part-time job and college. She agreed to visit with one-year-old Jacob and take things from there.

“We started off with short visits, where I would travel from Haliburton to Lindsay to see him. Then they started letting me have him for weekends. We did that for two months, then I got temporary custody and he started to live with me part-time,” Shank said.

CAS remained heavily involved even after the handover had taken place.

“All in, it took two and a half years for the adoption to go through. It was a lot of paperwork, a lot of stress on me, on my friends, and it prevented me from having any privacy,” Shank said. “They basically had control of my life.

However, she added, “It was all worth it. Jacob is my son, and that’s never going to change. It was one of the best days of my life when it became official.”

Money and other considerations

Despite a misconception private adoptions are expensive, Neimann estimates they spent around $7,000. When briefly looking into international adoption, fees were in excess of $40,000. Shank says she spent around $3,000, with CAS subsidizing half of her total bill.

Kartusch said anyone interested in adopting needs to be aware of the realities before becoming too emotionally-invested.

“Ideally, we’d like families to open their minds and hearts to what adoption from CAS looks like. Most kids are older and have relationships with biological family. Being open-minded to various possibilities greatly enhances a family’s chances of finding a successful adoption.”