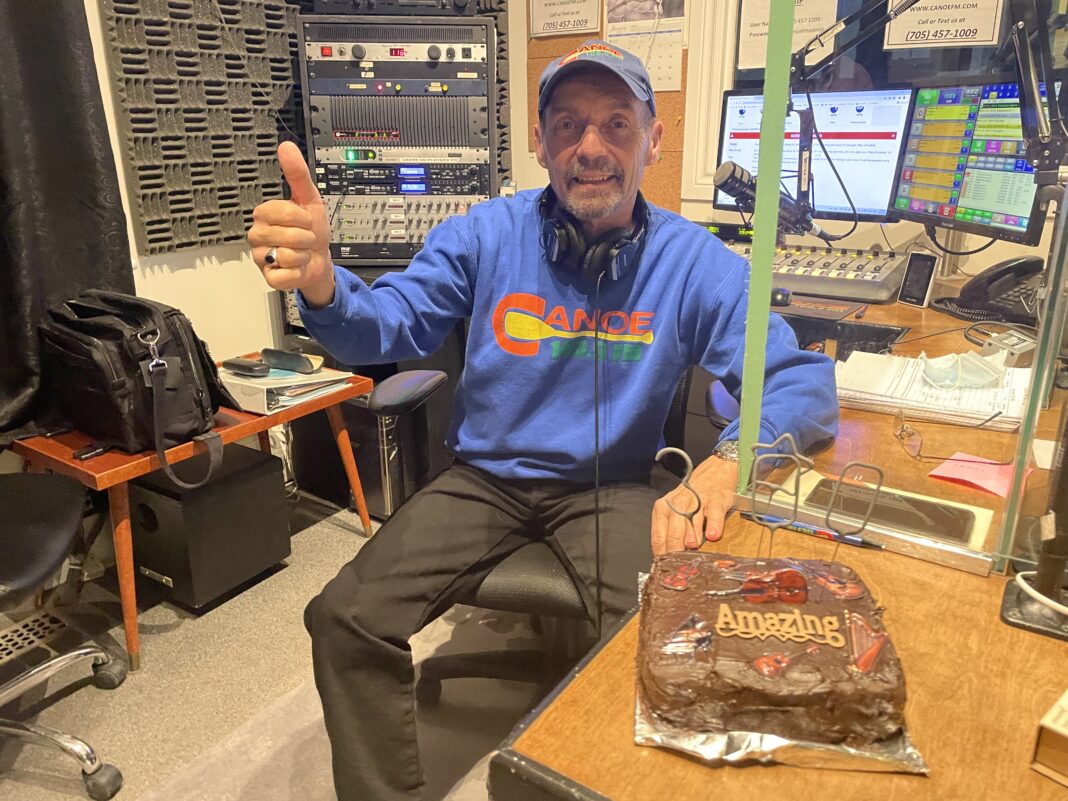 Three hundred shows. That’s a milestone Patrick Monaghan thought he might not achieve before he slipped on the headphones Jan. 25 to start another edition of the Buckslide Blues Cruise.
Monaghan was diagnosed with pancreatic cancer in 2019.
Difficult months of cancer treatment, surgery, and recovery meant many past hobbies were out of reach. His weekly twohour deep dive into the world of blues kept him going.
“It’s really been a blessing. I can distract myself and get buried into the next blues show I’m working on. It’s given me a reason to go forward.”
Monaghan was spotted by CanoeFM volunteers at the Haliburton farmers market five years ago. They said his voice was perfect for radio.
Monaghan agreed to the gig, and Blues was the genre that fit him best.
As a teen, Monaghan didn’t know his favourite rockers could trace their musical lineage to the Blues. The Buckslide Blues Cruise sails from “Lead Belly to Led Zeppelin,” Monaghan said. “And there’s a lot of music in between.”
He’s a bit of a perfectionist: pouring over his CD collection, crossreferencing notes on artists and songs and ensuring he adds some trivia to the mix: ask him how Led Zeppelin got its name.
“I enjoy teaching [listeners] something they didn’t know,” he said.
Since Monaghan took over the Blues slot at Canoe he’s dived into the Blues community. He won a National Campus Radio Award for the Best Jazz or Blues Music Show in 2020.
In producing the show he’s developed a network of listeners and friends who love the soulful songs and bassy rhythms of the Blues too.
It’s meant he’s been able to work directly with Blues bands across Ontario, lining up shows at festivals and clubs, as well as developing relationships with studios that will send music for Monaghan to check out, and hopefully play, on his show.
“They’ve come to trust me. I have a few bands that will give me a call and ask questions. I never thought my opinion mattered, but obviously it does and I’m rather proud of that.”
Friends in the Blues put on a benefit concert for Monaghan in 2019, raising money to fund the expensive burden that is cancer treatment. “One of the most difficult things was to get up on stage and keep my emotions together,” he said.
“I thought I was just … bugging these people. I became part of that community and I became very grateful. That’s something I’ve loved all my life and I never imagined being on the inside.” In 2020, Monaghan went to Memphis, Tennessee for the International Blues Challenge.
Photos from the time show him flashing his signature thumbs-up beside up-andcoming blues talents from Canada and the U.S. nearly always dressed in CanoeFM hats and shirts.
“I try to colour-coordinate,” he said with a chuckle.
He recorded nearly 200 “stingers,” with musicians lending their voice to segments played on the CanoeFM show regularly. “I kind of think with what I’m dealing with, when I’m well enough to go to these events, that’s my reward for dealing with the disease,” Monaghan said.
As he hit show 300, Monaghan said he wanted to extend “gratitude to all the people involved” in his Blues journey. “Whether it be the people at the station, the listeners, the promoter.”
Every Tuesday he’s able, Monaghan will slip on the headphones and thumb through his notes, bringing listeners far and wide on a journey of rhythm and soul.
“My job is to go out there and keep the blues alive,” he said. “For the past while, the Blues has been keeping me alive.” 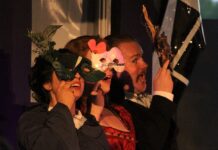 Walking the line between beauty and destruction

Story of Pinch a real gem for Bainbridge