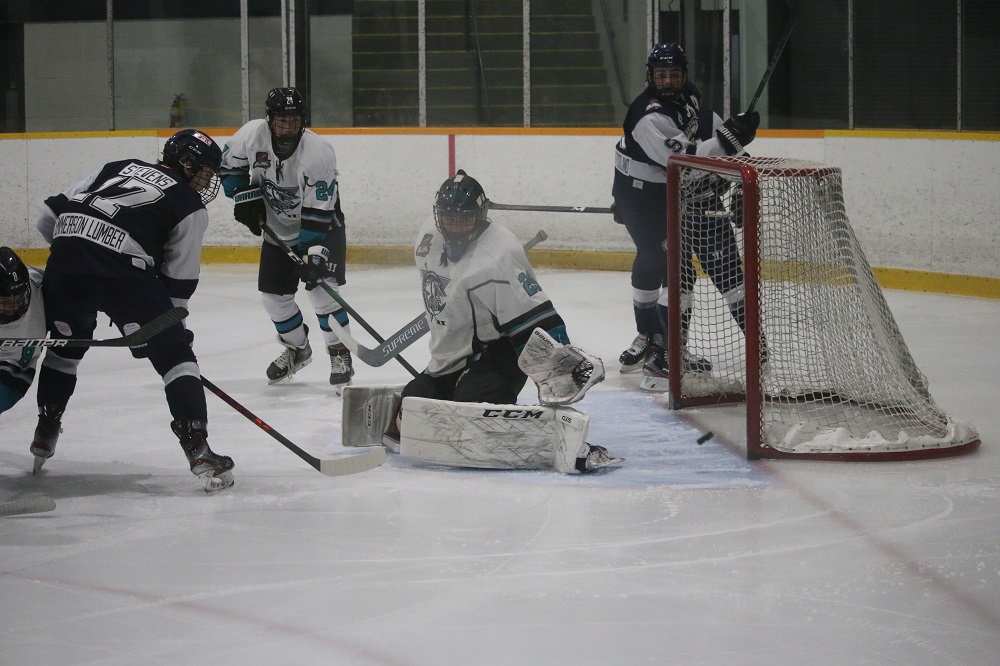 The Haliburton County Huskies returned to winning ways Feb. 4, recording a late 3-2 victory over the Lindsay Muskies as the OJHL returned to action.

Making the trip down Hwy. 35, the Huskies looked like a team with something to prove during the opening period, running a high-pace, physical game that the Muskies struggled to match.

The team’s top line of Oliver Tarr, Patrick Saini and Christian Stevens saw lots of minutes as they kept the Muskies penned in their own end. Jack Staniland went close to giving the Huskies a deserved lead at the mid-point of the first, with a drive from the point striking the post.

As the period drew to a close, Muskies defenceman Logan Maunder threw a hit on Huskies forward Nicholas Athanasakos. The pair exchanged words and dropped the gloves, with Maunder getting the better of the exchange. With Athanasakos prone on the ice, his helmet having come off, Maunder threw another haymaker to the back of his head. Rushing to the aid of his downed teammate, Sam Solarino received a game misconduct for third man in, a rule designed to prevent other players from interfering in a fight. All three players were ejected from the game, while Solarino was handed an additional three-game suspension.

Feeling aggrieved, the Huskies roared out of the gate in the second. Bryce Richardson gave the team the lead at 4:55, a scruffy powerplay marker after a scramble around the Muskies net. Oliver Tarr doubled the blue and white’s advantage at 16:37, tipping a Payton Schaly shot five-hole past the impressive Ethan Fraser.

A moment of madness from Christian Stevens to start the third, blatantly slashing Muskies forward Jack Falkner gave the home team a path back into the game. Boyd Stahlbaum scored on the powerplay just three minutes into the period, bringing the Muskies back within one.

Two minutes later and Stevens found himself back in the box, this time for tripping. Almost a carbon copy of his first goal, Stahlbaum fired the game-tying tally past a helpless Christian Cicigoi at 6:36 of the period.

The Huskies looked tired as the home side took control. Stahlbaum went close to completing his hat-trick before dogs’ defenceman Jonah Cochrane took centre stage. With less than three minutes on the clock, he picked up a puck from fellow blueliner Isaac Sooklal, steadied himself and fired past an unsighted Fraser, giving the Huskies an important two points.

“It’s a pretty big moment. Being a new organization this year, I think most people thought we were going to be a bottom end team, but we’re shocking a lot of people with the way we’re coming out and playing. We have skill, and we’re getting results,” Cochrane said. “I think we showed again tonight that we’re a team that can’t be taken easily.”

The Huskies suffered a 3-0 defeat to the Wellington Dukes on their return to S.G. Nesbitt Memorial Arena Feb. 5, despite outshooting their opponents 36 to 15.

Goals from Graham Dickerson, who scored twice, and Corbin Roach were enough to give the third-place Dukes a win over their East Division rivals.

Travelling to Toronto Feb. 7 for a tilt with the Jr. Canadiens, the Huskies found themselves on the wrong side of a 4-2 score line.

After falling behind to a pair of quickfire goals at the beginning of the second period, recent acquisition Simon Rose and Stevens dug the Huskies out of a hole with goals six minutes apart across the second and third frame.

While the dogs threatened to bite again, it was the Canadiens that got the all-important third goal, four minutes from the end of the game, before adding an empty-netter late on.

The team remains in second place in the East Division, with 40 points in 32 games. They welcome the Toronto Patriots to town Feb. 11, with puck drop in Minden at 7:30 p.m.