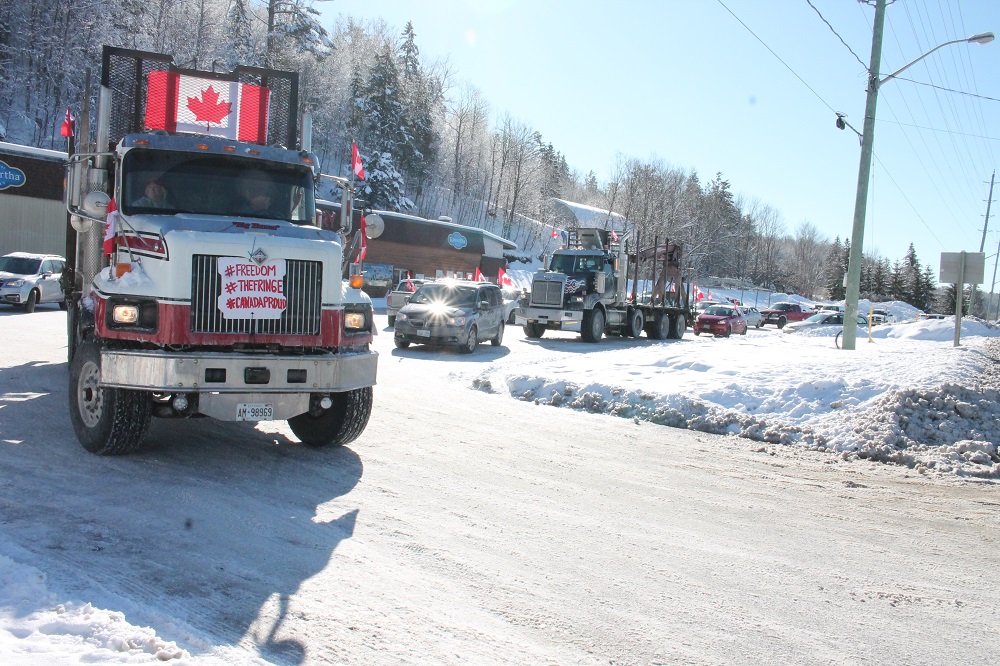 The leader of a Haliburton County convoy said his decision to start an online group that attracted 125 vehicles to a rally Feb. 5 was more about hope than science.

Scott Danilko and his wife Penny went to Ottawa Jan. 29 to see for themselves what was going on with the convoy there. They took their children, aged nine and 11, and a four-year-old grandchild, and Danilko said “I felt as safe as anywhere.”

Walking through the crowd gathered around Parliament Hill, he added, “it gave me reassurance that there’s hope. It was exhilarating.” That prompted him to start a local Facebook page to see if anyone was interested in a convoy from Minden to Haliburton.

It attracted more than 125 vehicles and they are planning to do it again this Saturday, Feb. 12.

“To show support for the convoys in Ottawa and Toronto and other cities around Canada,” Danilko said of his motivation in an interview.

Asked about his beliefs, he added, “I believe everybody should have freedom of choice and not be mandated to be vaccinated.”

It was pointed out that people can choose whether or not to be vaccinated but that choice comes with consequences such as vaccine passports.

“I’m against that,” he responded.

He was then asked about agencies such as Health Canada and the Centre for Disease Control in the U.S. saying vaccines, masks and other COVID-19 regulations are working.

He said it was “bull crap … because the numbers went higher this winter than they were even at the start of the pandemic. We were into the thousands and thousands and people were vaccinated and wearing masks.”

The Highlander asked what science he had to the contrary of Health Canada and the CDC. He did not have any.

He then went on to say he did not support children having to be masked, saying he did not have to wear a mask when he was in school. He added it is counterproductive since they remove their masks to eat their lunches. He doesn’t agree with children having to be vaccinated against COVID19 either. When Danilko was in school there was not a pandemic. Asked whether his children were vaccinated against other childhood illnesses, such as chicken pox, he said they were. However, Penny noted it was one vaccine, not two and a booster with the possibility of more to come.

Danilko said while he did not have scientific facts, he simply was able to get a group going online, a group that could probably be labelled “a fringe minority,” he conceded.

“It makes some people feel good about everything that has gone on in the last two years. It’s been all doom and gloom. It gives them some hope. It brings a small fringe of people a little bit of happiness. I feel good about it. And it is to support the ones in Ottawa and at Queen’s Park, to just let them know they are not the only ones being a part of this.”