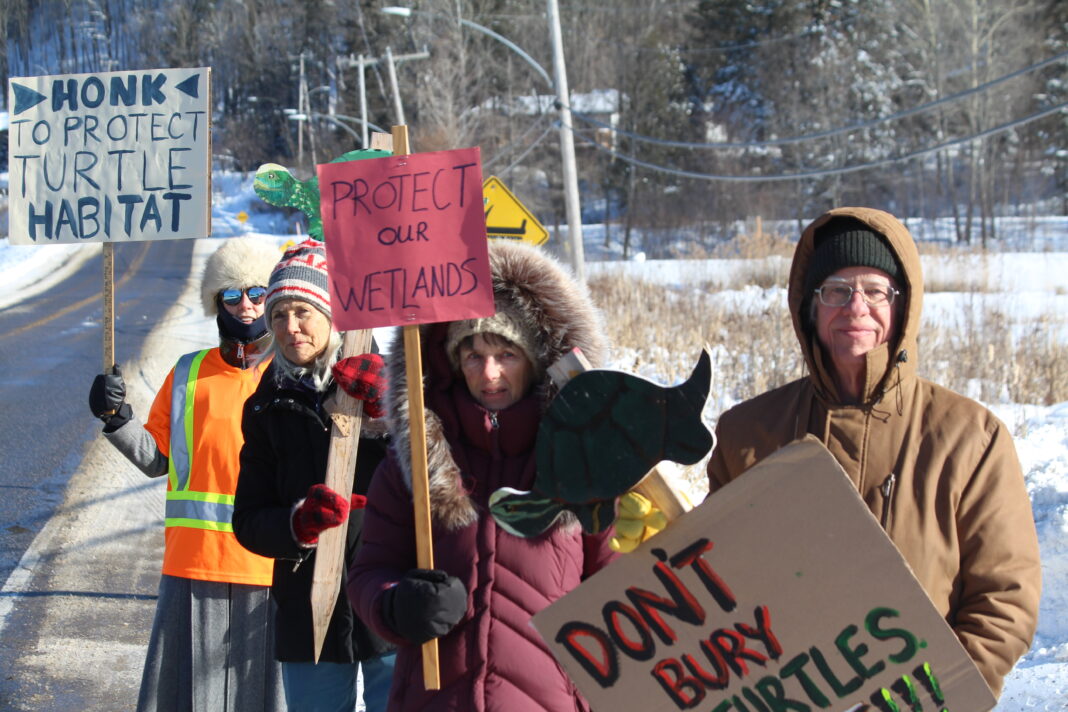 Environmentalists claim the filling of wetlands on a Gelert Road private property has threatened habitat of at-risk species and Dysart et al’s infrastructure.

Leora Berman of The Land Between said filling at the property near Haliburton Highlands Health Services could kill fish and threatened species that have been recorded in the area.

The Land Between said the property is likely home to Grace, a century-old turtle, and an at-risk species. Berman said she

cannot disclose the specific species due to regulatory agreements between the Land Between and the Ministry of Environment, Conservation and Parks (MECP) and the Ontario Ministry of Natural Resources and Forestry (MNRF).

The MECP has since become involved, with spokesperson Gary Wheeler saying, “our objective is to ensure that no species have been harmed from this incident. Investigators from the MECPs

are working as quickly as possible to complete an investigation into how and why this event occurred, along with possible solutions for remediation,” he added.

Wheeler said the landowner has stopped filling, agreed to complete a habitat assessment for ministry review, and is following guidance about species-at-risk.

The landowner has so far declined to comment to The Highlander.

Since sounding the alarm on The Land Between’s Facebook page on Jan.14, the

public has held intermittent protests at the location most days since the filling was noticed. More than 3,400 people have signed a petition online that states its goal is to “save this wetland and the amazing turtles that many in Haliburton know and love.”

Berman and multiple residents who submitted comments to Dysart Council said the township has a responsibility to clarify and enforce rules pertaining to wetland and species protection.

The area where the filling was noticed falls under environmental protection zoning in the township’s official plan. The official plan prohibits site alteration except for “flood control, other water management, or erosion control structures or works, docks and marine facilities.

In an email, Mascia said, “Dysart does not currently have a site alteration bylaw in place or any regulation within the zoning bylaw to provide for enforcement.”

Berman said the township should have stronger zoning bylaws to prevent habitat destruction. In an email, she said “there

are gaping holes in the tools and processes within our own municipality that led to this situation in the first place … and could lead to many more. If this isn’t fixed, our hunting heritage, fishing, and wildlife

are at stake. The proper tools are non- existent here, and that takes power away from the people and puts it in the hands of developers alone.”

However, building developments such as a proposed condominium on Grass Lake are reviewed by council and the public can weigh in. Site alteration does not require an approval process.

On Jan. 21, Coun. Nancy Wood-Roberts said, “If there’s no bylaw to do any sort of enforcement then everyone’s hands are tied.”

Dysart council regularly passes bylaws, changes previous rules and establishes new ones. So does the County of Haliburton.

“We all are in the same geographic area and we all have the same concerns to protect our water,” she said.

The bylaw in its current draft would prohibit the site’s alteration due to its proximity to wetland, but multiple councillors indicated the bylaw isn’t likely to be implemented soon.

Director of planning Jeff Iles and

Roberts said some online posts “make it sound like Dysart doesn’t care, of course, we do.”

to discuss other developments nearby, including the state of the County- maintained Gelert Road, which may have increased flood risks too. “I think they need to look at the historical factors in the property itself and how it became

a wetland,” she said, prior to council discussions.

“How long should we wait for the County to reach a conclusion on something they’ve been evaluating for three or four years before we as a local municipality take action to protect wetlands in our community?” asked Smith.

Council directed Iles to contact the Ontario government to find out what provincial allowances or restrictions may exist on the land.

“Every wetland plays a significant role in flood attenuation so it’s definitely having an impact,” Heaven said.

In an area such as Gelert Road near Haliburton Highlands Secondary School, wetlands act as a sponge for water that would otherwise flow over the road.

Heaven said wetlands should be a key concern for County council and its townships.

“Any further loss in wetlands will result in greater flooding potential all throughout the County. We really have to start paying attention to wetlands large and small,” he said.

Heaven has worked with the Haliburton Highlands Land Trust to map two provincially-significant wetlands in the Highlands.

“Most of our wetlands in our County have not been evaluated, and the issue we have in the County is we don’t know where the wetlands are, or they’re not properly mapped and defined,” Heaven said.

Zoning a wetland as provincially significant means it’s protected from development on a provincial level.

Barring a Ministerial Zoning Order, which the Ontario government has recently attempted to use to overturn such embargoes, Highlands wetlands deemed provincially-significant would be protected from site alteration or development.