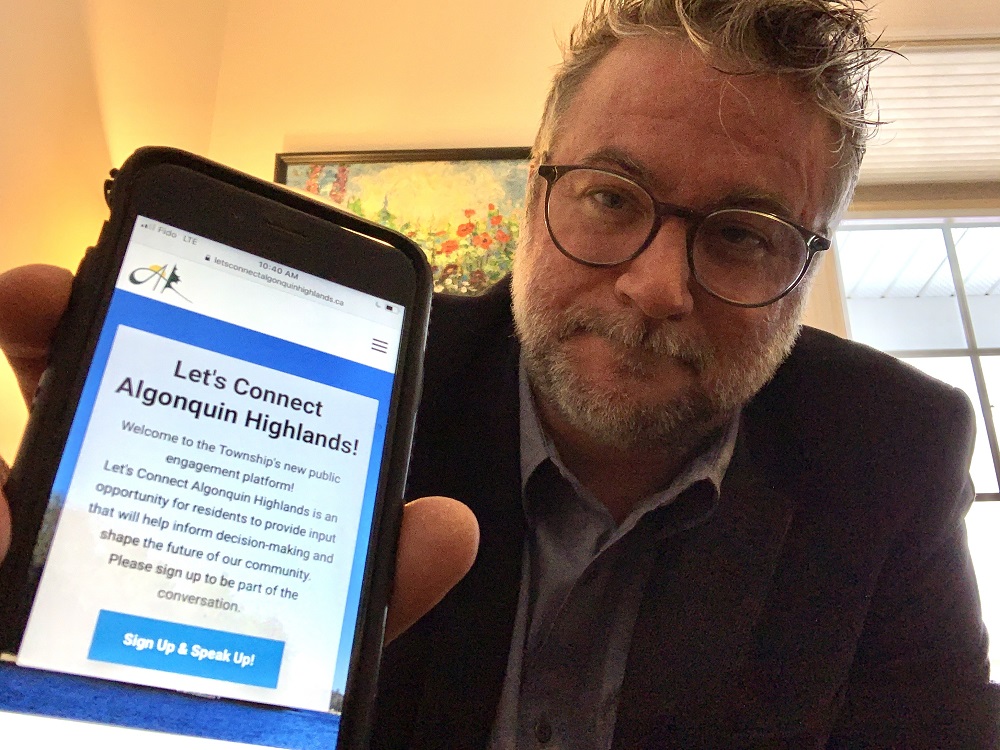 ‘Let’s Connect Algonquin Highlands’ is a multi-faceted portal that staff will use to consult and communicate with community members on a variety of themes on an ongoing basis, according to communications coordinator Chad Ingram.

“Heightened, two-way communication is really the goal here,” Ingram said. “One of the great advantages of the platform is that it houses a number of tools all in one place. We can conduct polls and surveys, but there are also opportunities for residents to share stories and engage in more open forums.”

There are two projects currently open for discussion on the portal, one concerning Algonquin Highlands’ zoning bylaw update – with discussions around cannabis cultivation, backyard hens, backyard beekeeping, and septic system setbacks ongoing – and a public survey seeking input that will be used in the creation of a new municipal communications plan for the township.

Mayor Carol Moffatt says she’s excited to offer a new way for residents to interact with council and municipal staffers.

“This [is a] more robust way of engaging with the community,” Moffatt said. “We’ve had a lot of success with social media over the years, but this is very different and will allow a more focused and issue-specific way for the public to participate in local government.”

There are already more than 80 registered users on the site. The portal cost $7,632 to set up. It can be accessed at letsconnectalgonquinhighlands.ca. Ingram said one of the key selling points of the software is its versatility.

“The potential applications are limitless, really. If there was a controversial planning application before council, for example, the portal might be used to conduct a poll to provide council with a snapshot of public opinion on that project. At a recent meeting, one member of council suggested it might be used to gauge reasonable thresholds for fee increases. Once events are up and running again, we could use it to ask for suggestions for added features to those events,” Ingram said.

“You can also do fun things with it – photo contests, for example, or a poll asking residents to vote for their favourite Algonquin Highlands landmark,” he added.