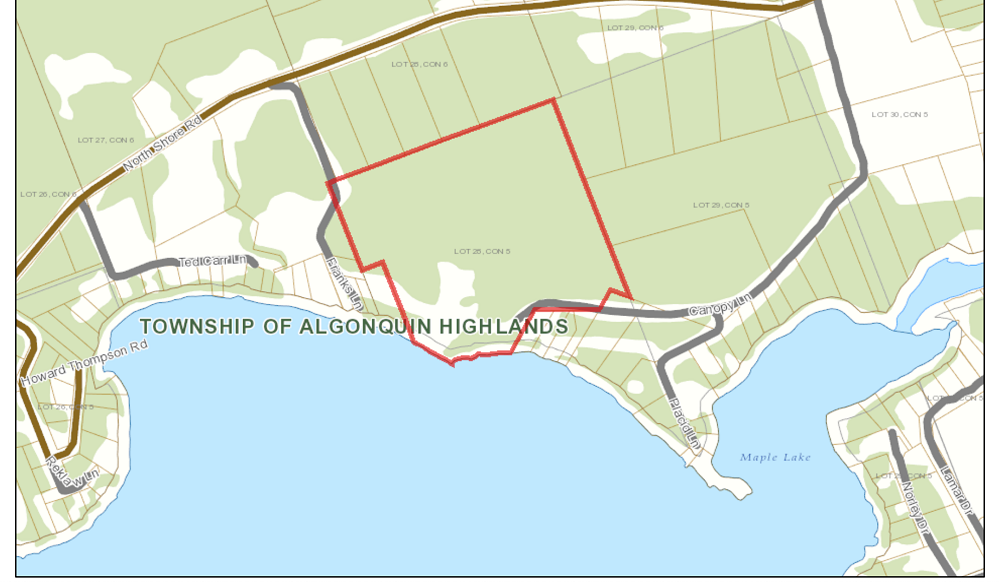 Algonquin Highlands has provisionally given the green light to Dimensions Health Centres to demolish and reconstruct a twostorey building on land the organization owns fronting Maple Lake.

At a meeting Nov. 18, municipal planner Sean O’Callaghan said the application complied with Algonquin Highlands’ official plan and bylaw provisions. The plan calls for the demolish of an existing building on the site, and subsequent construction of a new two-storey facility that O’Callaghan said will cover a “slightly larger” area.

The proposed building will boast a footprint of 6,400 sq. ft. and will be used, as per the application, for tourism purposes. It will include a spa, dining area, meeting rooms, gym, yoga studio, general reception area, sauna and float tank room. It will also include a walkout basement fronting the lake.

There was some public concern over the property in question earlier this year when, in a press release announcing its purchase of the site, Dimensions said the 40-acre property would be “the first of several destination retreat centres integral to [its] treatment model.” In the release, the company describes itself as a psychedelic treatment company focused on inpatient treatment, integrating neuroscience with traditional healing practices.

Some area residents approached local media in May, expressing concern that the site would be transformed into a drug rehabilitation centre. Dimensions has since refuted those claims.

Mayor Carol Moffatt said that while some remain skeptical over the company’s plans for the site, the municipality had no option but to approve the application.

“Let’s call a spade a spade. I know there are public concerns about this property. It needs to be stated, unequivocally, that the current zoning is being complied with and that we can’t make a decision on replacing a building about what may or may not happen on that property in the future,” Moffatt said. “We have to go with that it is today, and this is moving forward in accordance with our legislation.

Coun. Lisa Barry was concerned about the septic capacity at the site, especially in light of Dimensions’ proposal to increase the footprint of the main building. O’Callaghan said that the system on the site is large enough that it falls outside of municipal control, and is regulated by the province. He said the company would have to show that it is meeting ministry requirements when it submits an official building permit for the site.