Home Sports Huskies hang on for win over division rivals 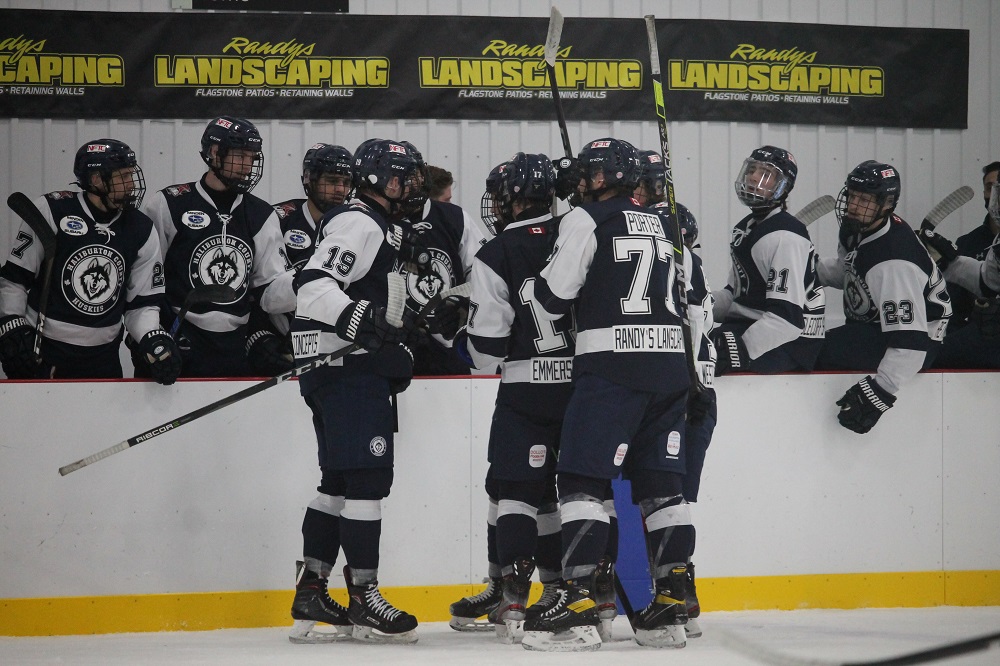 The Haliburton County Huskies held on for a 5-4 win over division rivals, the Lindsay Muskies, in a fast and physical game at the S.G. Nesbitt Memorial Arena in Minden Oct. 30.

With some costumed fans in attendance for the Halloween weekend tilt, the Huskies endured a couple of scares. They made five consecutive trips to the sin bin from 14:53 in the first until 11:12 in the second, giving up two power play goals in the game. Then, with Muskies’ goalie, Ethan Fraser, on the bench late in the third, the fish scored at 17:29 to tighten the game. However, the Huskies held on for the win, improving their record to 7-4-0-0.

The Huskies opened the scoring at 11:28 of the first, with Bryce Richardson scoring his first goal of the season, assisted by Nathan Porter and Riley Rogers. Just a little over a minute later, they scored their second goal, an even strength marker, by Christian Stevens, his first, with helpers from Patrick Saini and Oliver Tarr. The dogs started to get into penalty trouble and late in the period, the Muskies scored on Christian Cicigoi, at 17:54, to make it Huskies 2-1 going into the second period.

Stevens scored again at the 11 second mark of the second to put the Huskies up 3-1, with Richardson and Nick Athanasaskos getting the helpers. But another Huskies’ penalty put the Muskies on another power play and they found the back of the net at 8:10 to make it a 3-2 game. The Huskies’ Tarr answered back at 17:05, assisted by Stevens, to make it 4-2 Huskies heading into the third.

The Muskies kept fighting back and made it 4-3 at the midway mark of the last frame. But the Huskies replied with a second Richardson goal from Jack Staniland to pull ahead 5-3. With Fraser watching from the bench and the Muskies with six skaters, they found the back of the net to make it a nail-biting 5-4. But the defence and Cicigoi closed the door.

Two-goal scorer, Stevens, said it was a nice win to get under their belts. “We played hard, a little sloppy in the end, but we got the job done so it doesn’t really matter.”

Commenting on a four-game win streak, he added, “streaks mean a lot in this game so if we stay hot, I think we’re going to keep going and I’m excited to be here and I think it’s going to be great.”

Richardson, who also notched two tallies, said, “It’s been a slow start for me this year so two goals tonight is definitely really nice, a couple of good bounces, a great play by Jack Staniland on the second one there. But it’s just nice to get the win.” He said the Nov. 5 game against Trenton will be a good test for the team.

The Huskies return home Nov. 6 against St. Michael’s and play in Cobourg Nov. 8.

Game on as recreational facilities open