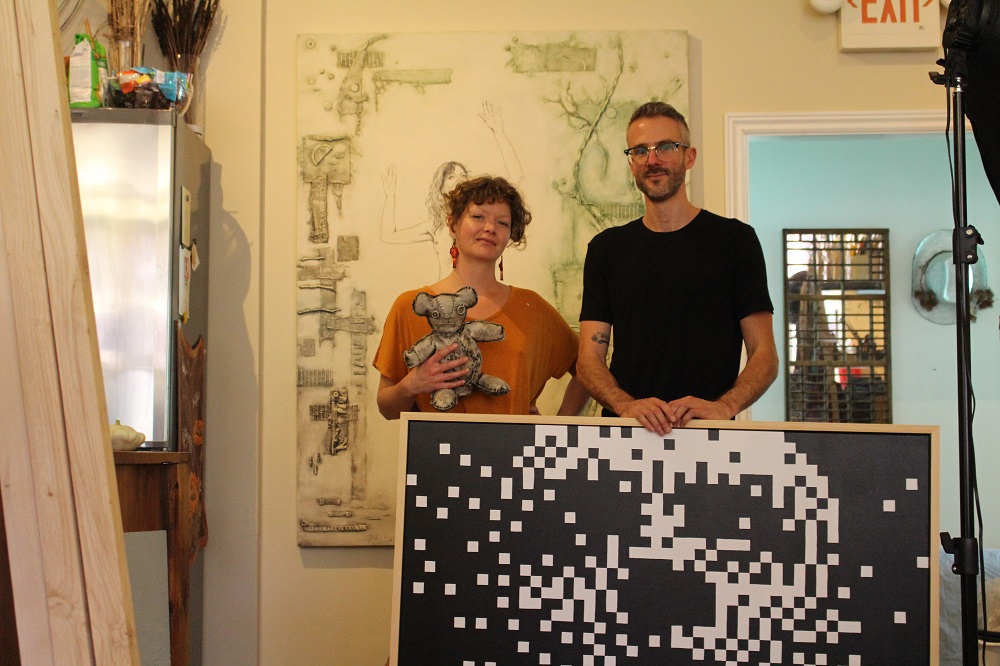 After moving to Haliburton in January, artist and music producer David Partridge often strolled past Tiffany Howe, outside her studio space, How(e) Creative, in Haliburton Village.

They were right. And now half a year later they’re co-hosting an art exhibit, “You Make Me Wanna Scream,” opening Oct. 2.

The exhibit is Howe’s first partnered show in the century-old former store, which she renovated in 2020 and opened in 2021.

The name of the show is mostly for fun. It’s a nod to Partridge’s paintings and Howe’s recent work which she says explores a bit of “inner turmoil.”

The “screams” in question are all silent; characters rendered onto canvases in splashy blocks of acrylic colour by Partridge, some letting loose howls. And Howe’s recent work might spook the unprepared: she’s been creating creatures in paper-mache, purposefully a bit weathered and worse-for-wear. On the table in front of her, a crumpled teddy bear stares forlornly out into the sunlit studio.

“Our art is so different. Hopefully we’ll bring in people who like different things… and who cares if they don’t!” she said.

Don’t take it too seriously though, because Partridge and Howe don’t. Even calling the show “You Make Me Want To Scream” seemed a bit too pretentious, Partridge said. Howe chimed in “It has to be ‘wanna.’ That makes it more fun!”

It’s also Partridge’s first time exhibiting in a formalized show, hanging up large-scale paintings that explore a blocky, pixelated style he began exploring when he was 17.

The show’s closing coincides with the scariest night of the year, Halloween, Oct. 31. That means there could be an impromptu block party, featuring a witches’ dance to celebrate the end of the monthlong exhibit. “It’s gotta be a ‘closing ritual,’ not a ‘closing reception,’” Partridge said. And the space might suit an art show experience tinged with a healthy dose of the unexpected. “

I have this incredible space that’s also super creepy,” Howe said with a laugh, gesturing to the high ceilings and victorianesque facade outside. “Let’s just have another event and throw some other fun things on top of it.”

It’s a space that she lives in too, so all those coming to the show after it opens must call ahead to book a viewing. “It is my space to live and work: this is my living room, dining room, office and studio.”

The gallery’s purpose might just reflect that of the upcoming partnered show: it’s a celebration of art and community.

“Without having it being a store, I wanted to make it a more easy-going space,” Howe said.

The pair are hosting an opening reception on Oct. 2 from 1-4 p.m. at How(e) Creative, located across from Haliburton United Church.

Showcasing one of the greats