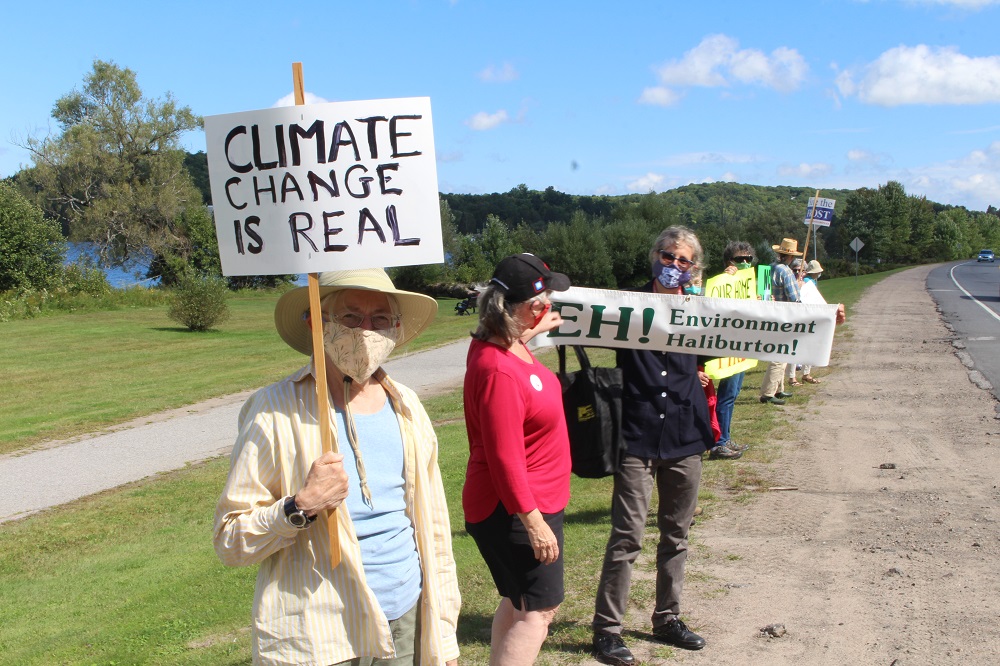 People gathered to hold signs reading “climate change is real” and “there is no planet B” in Haliburton Sept. 8 to urge political action on climate change in the upcoming election.

Organized by Environment Haliburton! and Concerned Citizens of Haliburton County, the march drew more than 23 people to Head Lake Park before they walked to the side of Highland Street, passing cars and trucks honking their support.

It was part of 50 marches planned across Canada by 350, a U.S.-based non-profit dedicated to ending the reliance on fossil fuels and advocating for climate change action.

“When you look out west, when you look at Europe, Australia, those are ways you can tell the climate crisis is almost past a crisis. there has to be action now,” said Bonnie Roe, of Concerned Citizens of Haliburton County. “We believe our politicians need to start listening.”

Carolynn Coburn, a director with Environment Haliburton! said she’s been frustrated with a perceived lack of action from federal and provincial representatives in the County. “I don’t hear Jamie Schmale, I don’t hear Laurie Scott talking about climate and their party’s policies,” she said.

The UN Intergovernmental Panel on Climate Change predicts that unless urgent action is taken to keep temperature level increases below 1.5 degree Celsius, extreme weather events could have terrible consequences.

For many such as Coburn, that means Canada should do everything possible to limit emissions, even if it means temporarily hurting parts of the economy such as the oil and gas sector.

“You can’t have an economy on a dead planet,” she said.

Prime Minister Justin Trudeau’s climate record has attracted criticism, too. For example, in 2019, the first year of federal carbon pricing, emissions rose by 0.2 per cent. Many also regard Trudeau’s purchase of the Trans Mountain pipeline as a violation of climate action goals. “If we don’t deal with climate there’s nothing else,” said Judi Forbes, Liberal candidate for Haliburton-Kawartha Lakes-Brock. Forbes was the only candidate who attended the event. Schmale and other candidates had scheduling conflicts, said Susan Hay of Environment Haliburton!

Tom Regina and Andrea Percy, both members of the Green Party of Canada, attended the march to advocate for urgent action on the climate crisis.

“We’ve got to get started on doing something,” Percy said.

Regina noted that so far in the election race, demonstrations seem to have centred on issues surrounding COVID-19 protocols.

“It’s important to show different kinds of protests,” Regina said. “The protests that have been given media attention in the last few days are quite different from what we’re here trying to draw attention to. By having these demonstrations, we can have our voice brought out just as much. There are people thinking about the environment and various progressive platforms.”

Concerned Citizens of Haliburton County and Environment Haliburton! is holding a Fridays for Futures Global Strike on Sept. 24 at noon in Minden.

Public will be asked for input on police plan