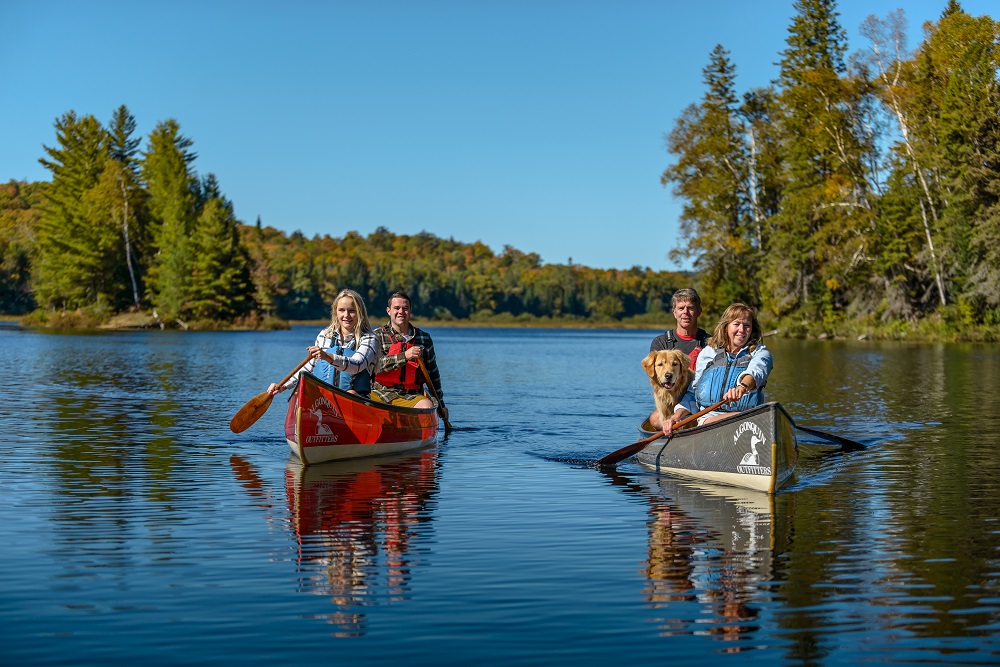 Shipped all the way from New Brunswick, they kickstarted Bill Swift Sr and forester Dave Wainman’s first Algonquin Outfitters location on the edge of Algonquin Park.

Now, 60 years later, the outdoor company has 12 locations spread out over Haliburton and Muskoka, serving backwoods campers, wakeboarders, cyclists, paddlers, climbers and just about anyone who enjoys the outdoors.

“I think my dad would be proud to see us maintain our traditional roots in what we offer,” Swift said.

“We do it right, we do it properly, with respect to nature. And we try and teach that to customers who are coming up,” said Swift.

They don’t only do that through conversations at the cash register. Algonquin Outfitters has a storied history of overnight canoe trips, a paddling school at the Gull River or even at their cafe and grill nestled in Algonquin Park.

That expansion started in 1980, largely prompted by Rich Swift and his brother Bill Swift Jr.

Throughout the store’s 60-year, multigeneration history, many have worked at the company for decades.

“We see that a lot, we see people who are with the company for 10 years and then they get the bug to go do something else, and they’re like ‘I miss the family’.”

Mitson himself left the company but quickly came back, working his way up the ranks. Now, he oversees marketing the company to an ever-expanding range of customers eager to explore Ontario in new ways.

Each store offers something slightly different, ensuring each branch has a different “flavour.”

“People tend to gravitate towards stores that they find serve them,” he said. If for example, you’re an avid paddler, AO Boatwerks could be the place to go while mountain bikers might voyage to Huntsville for an expanded selection. Though, adds Mitson, the Haliburton store services bikes.

Along the way, Algonquin Outfitters has developed a special relationship with artists through its yearly paddle contest. In 2019, 182 paddles were auctioned off, raising $32,575 for local charities. This year artist Jerry Lantaigne painted seven canoes for the auction as well, in celebration of the Group of Seven’s 100th anniversary. This year’s paddles will be auctioned off online from Sept. 13-27.

Mitson also said the store wants to showcase its history and future. They’re hosting a quiz on the store’s history (spoiler alert: all the answers are on their website), with the winner getting $1,000 to spend at the store.

Algonquin Outfitters’ Haliburton location got a refresh this spring.

“It’s got a lot more variety than what we had available in the old space,” said Mitson. The store moved from the corner of Maple Avenue and Highland Street to the former Source for Sports location.

“We wanted to showcase more of the products we offer at some of our larger locations – it was an opportunity to do that,” Mitson said.

It’s a lineup of products that are in hot demand. Biking, camping, canoeing: all activities which have exploded in popularity during the COVID-19 pandemic. “Because of COVID we’ve seen this huge boom in tourism,” Mitson said.

It’s a boom all 12 locations are ready for as they cater to a wide array of outdoor enthusiasts in a way that Mitson said is “quintessentially Canadian.”

“We’ve always embraced that but now we have a need to get away from the Zoom calls and chats and get outdoors.”