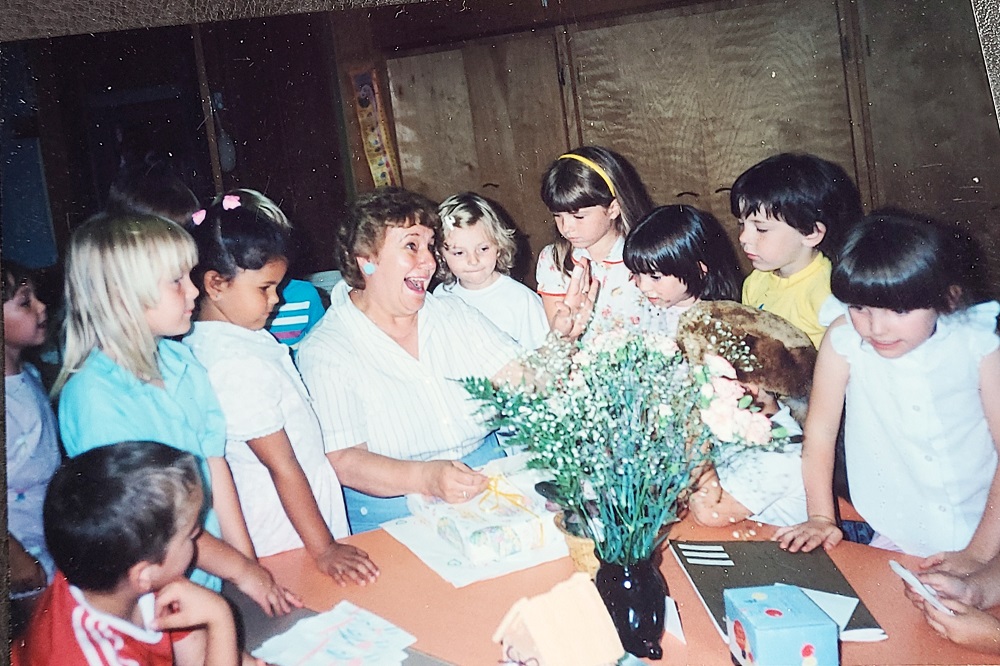 Known as Mrs. Walling to thousands of kids, a woman who taught at the Victoria Street School in Haliburton for 36 years has passed away.

Bonnie Walling was in her 89th year.

Her daughter, Susan Baszczynski, returned to the school that is now home to Community Living Trent Lakes Sept. 6 to reflect on her mom.

Sitting at a picnic table overlooking what would have been Mrs. Walling’s Kindergarten and Grade 1 classrooms, Baszczynski said her mom spent the bulk of her career there and was also a student herself.

“It’s a reminiscing spot. She has a picture of the school that was painted for her when she retired. I brought it to the funeral home and I’m going to hang it in my home. It’s a nice print.”

Baszczynski said there is no doubt her mother had an impact on the community. She said it’s been “heartwarming” having former students reach out in tribute to the woman who lived in the village until she was 85.

“I think she truly gave a lot of kids a very positive start with their school education. They began in a happy spot. I think it carried a lot of them throughout their years. Anybody I’ve talked to that had her [as a teacher] has fond memories.”

Many have commented how Mrs. Walling would recognize them.

“She amazed me how she remembered names. Not only would she remember the child, she would remember other kids in the class and the year the kid was in Kindergarten. She had it all down. That was up into her 80s she was still doing that.”

By the end of her career, she was teaching kids of kids.

Bonnie Walling (Lee) grew up in the village, just up the hill from the former school. The family had a cottage on Drag Lake they would go to the day after school ended right up until Labour Day. They would come into the village for the annual Rotary Carnival parade.

Baszczynski said her mother showed her and other kids at the cottage a good time every summer. For example, she would set up treasure hunts and hide clues. “And it always included a treat at the end.”

Although she lived to be nearly 90 her life was not without its health challenges. She was a three-time cancer survivor, had Crohn’s and in the end died of congestive heart failure. Despite that, she remained a caregiver, undergoing radiation for breast cancer in Kingston while caring for her husband who had Alzheimer’s in the early 1980s.

Baszczynski said she would joke with the doctors that her mom’s nickname should be “lucky” for all that she had survived.

With her dad being a road surveyor, Baszczynski said she and her mom were close growing up.

“She was my rock. We did a lot together growing up. And we share a similar sense of humour so we got along. She came to anything I ever had or did. That was always nice to know she was there.”

Of the many tributes on the Haliburton County Funeral Home website, Jacoba Lilius wrote, “Forever Mrs. Walling to me. What an impact a caring teacher can have and she certainly did. She nurtured my love of learning and reading and inspired me to become an educator too. Sending my sincere condolences to her family.”