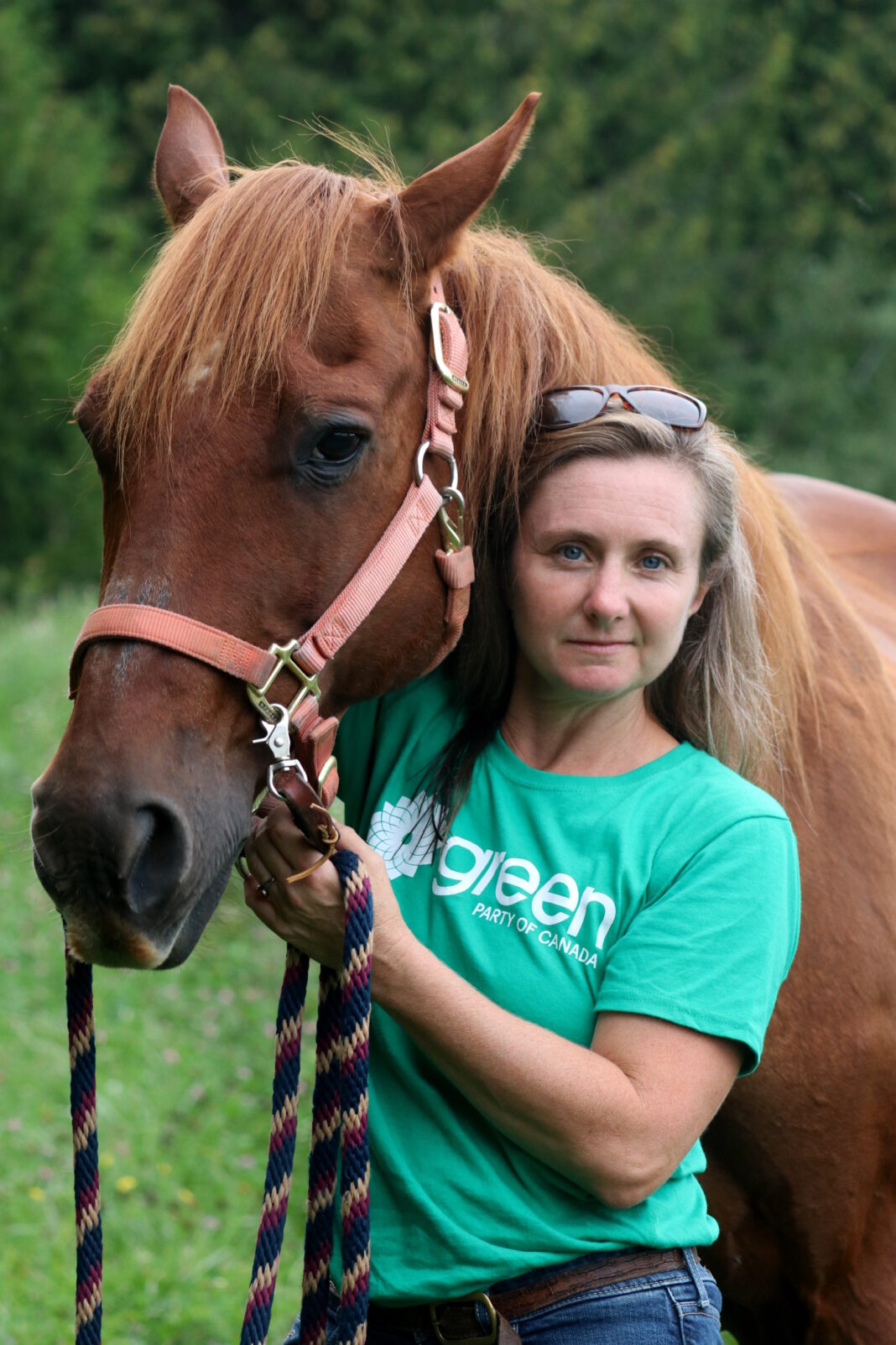 Nor will she predict a percentage goal for the Greens, after 2019 candidate Elizabeth Fraser garnered 8.4 per cent of the vote.

“I’ve been speaking to people in parks and everybody’s ready for a change that I have talked to,” she said. “I’m not going to limit us by putting any numbers out there. We’re in it to win.”

While taking a lunch break at a parkette on Balsam Lake near Cambry with her children, Godsoe said she is dedicating the month of September to contesting the election.

She owns a riding stable called Heaven’s Gait in Cambry and runs summer camps for kids. She is a mother of nine and has one grandson. On the day of the interview, the kids had practised rodeo skills and tie-dyed bandanas.

She said she has had horses for about 25 years and has taken them to public events.

“It started off with ponies for my young kids and it just sort of grew.” She said she loves the feeling she gets from taking ponies or horses to public gatherings. Like when walking dogs, she said, “you immediately have something to talk about because the horse is the attraction.” She is working to open a therapy centre at her farm for people with post traumatic stress disorder.

Asked if the Green Party’s very public leadership woes are being discussed, she said some people mention it. “They ask if Annamie (Paul) is still the leader because that was really put out there. I think that was not an accurate representation of what actually was happening. I think there was an issue with her press person but it was resolved to the vast majority of the party’s satisfaction and I think the bad press that we got was really troublemaking. It was not reflective of the reality.”

As for the timing of the election, she said it is “unnecessary and ill-timed” with droughts, fires and a pandemic. “I really hope people see it for the power grab that it is.”

As for her and the party’s election platform, she speaks to climate, electoral reform and international issues.

“The climate should be in everybody’s heart. I really feel we have a pulse of it in this riding. We have a lot of farm people. I think as a farmer myself we are really in tune with what’s happening in the environment and the threat of fires and drought and flash floods and severe storms. We get it. It’s important. The Green Party has been constant and unwavering in our commitment to alleviating climate change and to sticking to our carbon goals.”

As to electoral reform, she said Liberal leader Justin Trudeau campaigned on change in 2015 and it has not come about. “Because now he is in power and he doesn’t want things to change but we do. When we get in, we will make the change.”

Godsoe added that international affairs are important to her and the party has been consistent in its stance of Canada maintaining its role as an international peacekeeper, stopping the arms trade, not supporting violent, militant groups, and being open for immigration of displaced people and people who are asylum seekers and in need of a place.”

She said she believes the crisis in Afghanistan is on people’s minds.

“I’m just really looking forward to speaking with people. If people see us out and about, putting up signs, wearing green T-shirts, I really want to be approachable and I want to hear feedback from as many people as I can about what is important to them.”

Spreading the spirit of the holidays at Highland Wood

Schools staggering back during pandemic