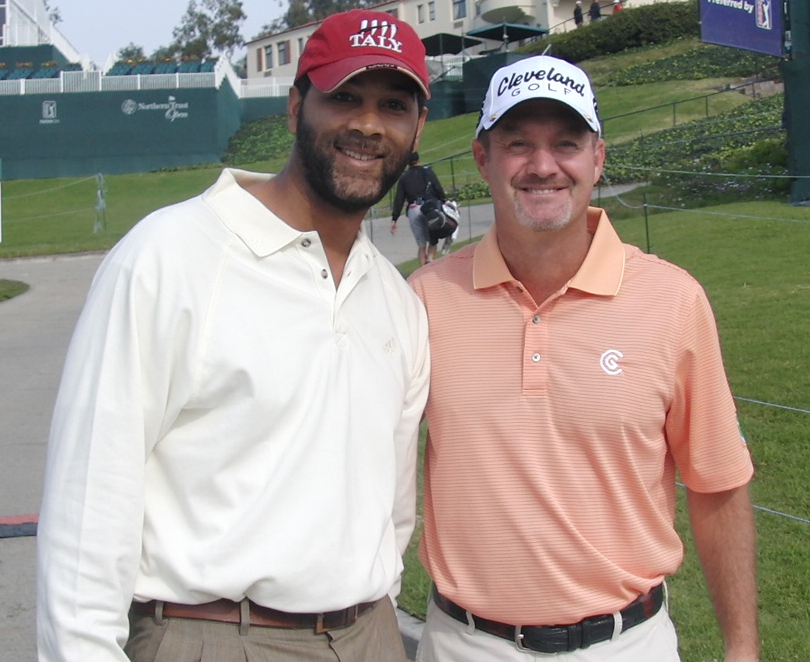 “You have to know where you want to go. Otherwise, you’ll waste a lot of time,” said Taly Williams.

Williams hasn’t wasted much time. Originally from Haliburton, he’s a co-founder and managing partner of a water management firm in Los Angeles and an inventor with multiple patents for sports technology that’s used by top athletes. That’s not to mention his professional football career.

Now he has one more accomplishment to add to the list: a spot in the Haliburton Highlands Sports Hall of Fame.

“What’s interesting for me is I’ve never been one to chase awards,” Williams said, adding he greatly admires the work the hall of fame committee has done.

He, along with his sister, Lesley Tashlin, have been a big focus of the Haliburton County sporting community this year, with local students winning the push to have their murals installed on the side of the A.J LaRue arena. For Williams, the hall of fame and mural conversations have renewed his connection to the community he grew up in.

“To actually have this award and this mural, it really does provide a new level of connection,” he said.

Williams studied engineering at Waterloo. After that, he spent a stint playing football professionally for the Toronto Argonauts and Hamilton Tiger Cats from 1994-96.

However, while playing, he was also working in engineering. He said he feels fortunate to have had the choice to switch into engineering full time after his playing career.

“Professional sports are very cutthroat. You, at the end of the day, are just a number to them, they’ll cut you in a second,” he said. The lessons he learned on the field spurred him on.

“To be a professional athlete and to ‘make it’ gives you a higher level of confidence in anything you do,” he said.

That confidence and desire to combine academics and sports led him to develop the Talynt Point system for golfers, a device which attaches to your arm to guide your swing.

“It’s actually about trust, talent, still executing something,” he said. The device was the result of hundreds of hours of practice,

“Instead of focusing on the movement that you are attempting to execute, I give you a new point of focus that results in the action occurring correctly,” he explained in an email. It’s about knowing what to focus on and trusting the process along the way.

Trusting your talent (or Talynt, as the brand’s slogan reads) is a central part of Williams’ worldview.

“We all have a talent. In my opinion we are all the best in the world at something.”

His inventions have roots in the Highlands: “As with most things in my life it starts in Haliburton,” he said. That’s where he started playing golf and football.

Growing up in Haliburton

Williams circles back to the students at J. Douglas Hodgson elementary school who rallied for his recognition on the wall of Haliburton’s arena. All five athletes currently depicted are white.

“Diversity and inclusion in Haliburton is important. That wasn’t there when I was there.”

Being Black in a community almost exclusively made up of white people meant he had to tread carefully sometimes.

“I know that I had to be careful when I was up there,” he said. “Sure, Haliburton’s a fun cottage-loving town, but not everyone’s accepting of minorities up there.”

He said both the hall of fame and mural could be a chance to motivate change.

“I’m hoping that this opens up the conversation and starts allowing others who feel left out and not a part of Haliburton to start connecting to it.”

He attributes much of his early success to teammates and coaches at Haliburton Highlands Secondary School where he set multiple track and field records and starred as quarterback for the football team.

Through his life, Williams has seen how keeping an eye on the goal pays off. And that’s what he wants to share with the youth of Haliburton as a new inductee into the hall of fame.

“I would like kids to believe anything is possible, understand that they have a talent. Always differentiate themselves. Go the other direction and explore.”

The Haliburton Highlands Sports Hall of Fame has postponed its Oct. 23 inaugural induction ceremony. Chairman Scott LaRue said, “The board felt that it would be best to postpone the event due to the ongoing uncertainty around COVID. Naturally we are very disappointed but we look forward to the time when it will be safe to bring everyone together for a wonderful celebration of the inductees’ many contributions and accomplishments. We will be watching the situation closely and plan to reschedule when it looks appropriate to do so.”