Home General News The Turtle Guardians: saving turtles, a Tupperware at a time 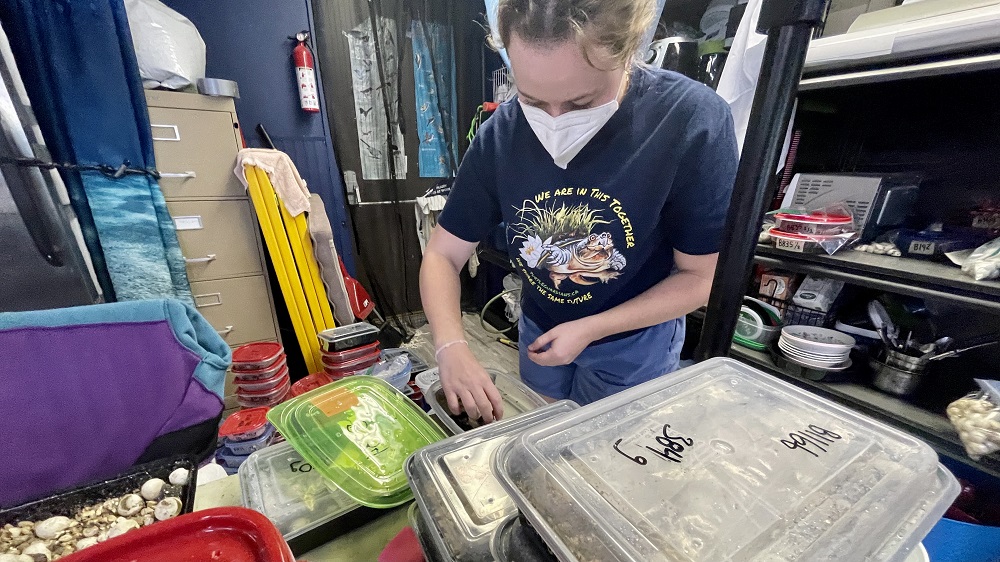 By the reedy shores of Head Lake, Leora Berman gently scoops a baby snapping turtle from a Tupperware container and places it on a semi-submerged tree branch.

With a “plop” the turtle’s shiny green shell disappears underwater as it begins life in the big wide world of Haliburton.

Its chance of surviving just increased tenfold because of the care of a dedicated crew of Turtle Guardians.

That turtle is just one of thousands which Berman and her colleagues at The Land Between nurture at their hatchery.

The creatures are scooped as eggs from their nests around the County to keep them safe from predators including humans.

“Little ones don’t know where water is instinctively. They would scatter and they would get run over easily,” said Berman beside Head Lake.

She explains how nests around the County are monitored. Once a mother lays her eggs in the late spring, the group comes in and brings the turtles to the hatchery on Gelert Road, where they’re stored in cool, humid conditions until they hatch.

Then Berman and her volunteers spend much of August transferring turtles to their new homes or making sure the miniature guests are happy and healthy at the hatchery.

But how can you tell if a turtle is ready for the adventure?

“See this little belly button?” Berman points to a little bump on the turtle’s soft underbelly.

“As soon as it’s flush then they’re ready to go. Then they’re good swimmers.”

She explains how since turtles have great memories, it’s important to release them where they were born in case they’re drawn back to the area.

“Instantly they start memorizing these pathways that they walk,” she said.

And turtles are in trouble. Eggs make a tasty treat for many animals and despite awareness campaigns and monitoring by groups such as Berman’s, hundreds of turtles are hit by cars each year. Adults also need longer to reach reproduction age than most animals.

“Since it takes so long to replace themselves, the populations are really dumping,” she said.

In order to help the turtle population, it’s important for her and The Land Between to know the genetic makeup of locations around the County too. That’s why each Tupperware travels back to where the eggs were found.

“We can’t just put them anywhere.”

With each Tupperware, Berman and her team release a new generation of turtles into the Highlands’ vast ecosystem of wetlands, rivers, ponds and lakes; spreading hope for a species at risk along the way.