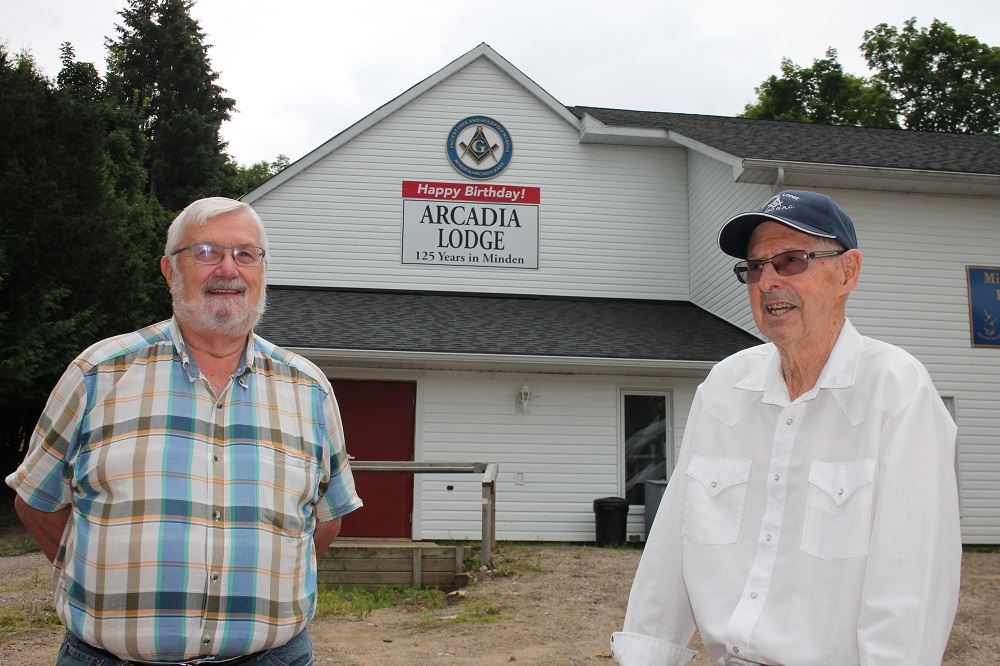 Arcadia Masonic Lodge in Minden has reached the grand old age of 125 and members are hoping to celebrate the anniversary this fall.

Arcadia historian Gareth Kellett, a Past Master and Past District Deputy Grand Master, has written a short history of the Lodge. He notes that many of the men who settled in the area in the 1800s were Masons. The closest lodge was Spry Lodge in Fenelon Falls and it was difficult to attend the meetings due to the lack of roads.

“In 1896, eight brethren from The Spry Lodge, approached Grand Lodge with a petition to institute a lodge in Minden,” wrote Kellett.

“The request was granted and in August 1896, a new lodge was instituted in Minden as the Algonquin Lodge U.D. [under dispensation]. Very shortly it became Arcadia Lodge.”

Meetings were held over Donald Hartles’ general store at the corner of today’s Water and Main streets. Most men in Minden and the surrounding area were Masons and by 1928 Arcadia had outgrown its space. The lodge built a two-storey building beside the Rockcliffe Hotel. By 1947 it was time to expand again, this time to the old parish hall for St. Paul’s Anglican Church.

In 2005 it was becoming apparent that the lodge foundation needed work and Arcadia learned the Minden Food Bank was looking for more space. The lodge and the food bank agreed to join forces.

“The end result is the building that we have today which houses the Masonic Lodge, the Minden Food Bank and Community Kitchen” on Newcastle Street. Community Kitchen is a food bank initiative that makes prepared foods available for those in need.

Along the way Arcadia was responsible for starting a new Masonic Lodge in Haliburton in 1903 and another in Kinmount in 1905.

In an interview with The Highlander, Kellett spoke of the Lodge’s community contributions beyond support for the food bank, such as bursaries and awards for students at the elementary school level.

As for marking the anniversary, “we’ve been holding off, waiting until we were able to have meetings again, but we are planning to have a celebration towards the end of September as far as we’re aware of at the moment,” said Kellett.

“I would expect in the very near future that they [Grand Lodge] will be sending out word that we’re going to be able to meet in person again.”