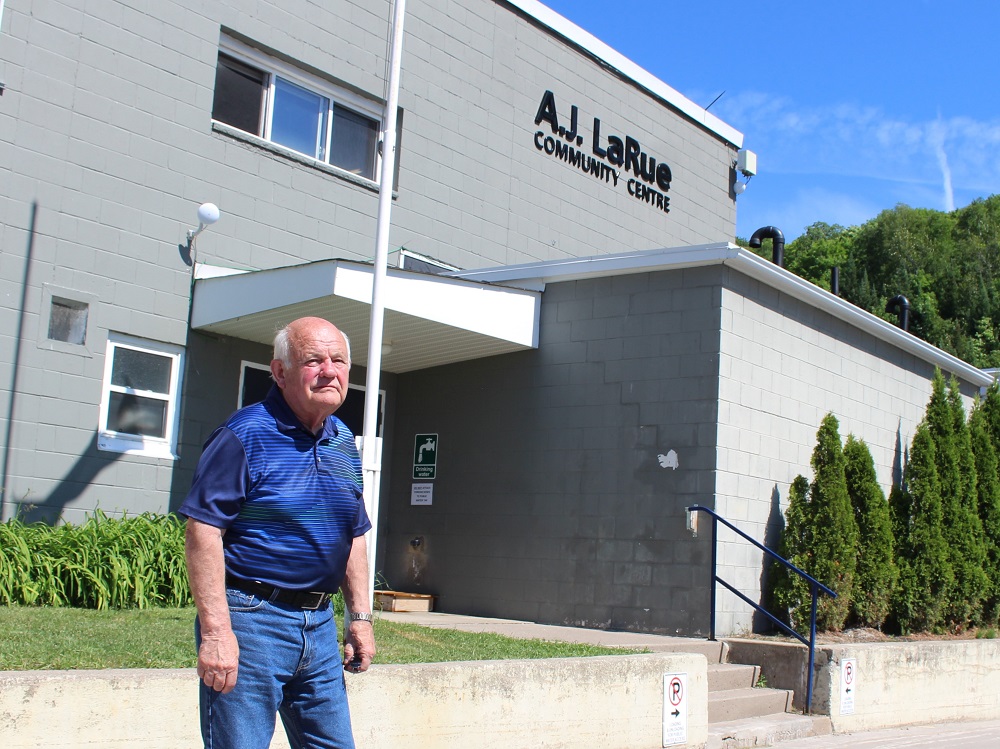 A.J. LaRue will be honoured with a spot in the new sports hall of fame – in his namesake stadium. According to the Hall committee, LaRue has been inducted as a builder because he “promoted sports and sporting values that directly impacted thousands of Haliburton County youth.”

After working in Toronto during the 1940s, LaRue moved back to the County and started coaching the senior Haliburton Huskies team. He was widely known as a Scout leader and member of the school board.

Throughout the following decade, “Ab” acted as bus driver too, transporting players between softball and hockey practices. His son Scott LaRue, chair of the Hall committee, said that it became clear the existing natural ice rink wouldn’t cut it if players wanted to progress.

“I couldn’t advance much without the proper facilities,” said LaRue. LaRue said his father worked hard to convince local politicians and community members that the new stadium would be an investment in the community.

“He finally got people convinced it was time to do so – he needed the community’s support,” LaRue said.

His father’s hard work paid off: after managing both the fundraising and building of the project, in 1965, the Dysart community centre opened. Then he got to work finding a way to bring a new branch of competitive hockey to the County.

His efforts were instrumental in landing the Junior D Haliburton Huskies Hockey team.

It was thanks to the family business – a successful bus company – that LaRue, team manager and Scott, the coach, were able to hit the ground running with their new team.

“We couldn’t have afforded that junior team if we hadn’t had our own buses,” said LaRue.

After he came back to the Highlands after a stint playing professional hockey in France, Scott LaRue took over the coaching of the team. With his father as manager, they proved to be an effective duo.

“My dad and I always got along,” LaRue said. “But he wouldn’t let anyone push him around.”

After one game, LaRue stormed up to the referee: “I’m not paying you unless you smarten up and ref a decent game,” his son remembers him saying. “We got a lot of people here – and you just ruined the game.”

He turned to Scott. “Here’s the money, Scotty, you pay him!”

In 1971, the Huskies captured the Ontario Hockey Association Junior D cup. With a line-up of eager fans stretching down the street, the stadium was stuffed to capacity.

After a nail-biting game, the final whistle saw the Huskies finish on top. The crowd erupted.

“My dad wasn’t a very exuberant type of person – but he and my mother were very proud. They went on the ice, and they were shaking hands with everybody,” LaRue said. He even saw tears in his father’s eyes.

“I think it was just a culmination of everything that happened – right up through to win an Ontario championship in the OHA.”

With the new stadium, a successful OHA team and new crop of talent learning the game at nearby Hockey Haven camp, LaRue had the chance to meet the greats: Bobby Orr and Ken Dryden both coached at the camp, and LaRue bussed them and the trainees around.

“I was really happy for him to get to experience getting to know those NHL hockey players,” said Scott LaRue. “He was always interested in hockey, loved to coach the minor kids too.”

Without Albert LaRue, Haliburton’s sporting history would look much different. The athletic community builder not only helped erect Haliburton’s arena: over 40 years, his commitment to the County’s athletes laid a cornerstone for generations to come