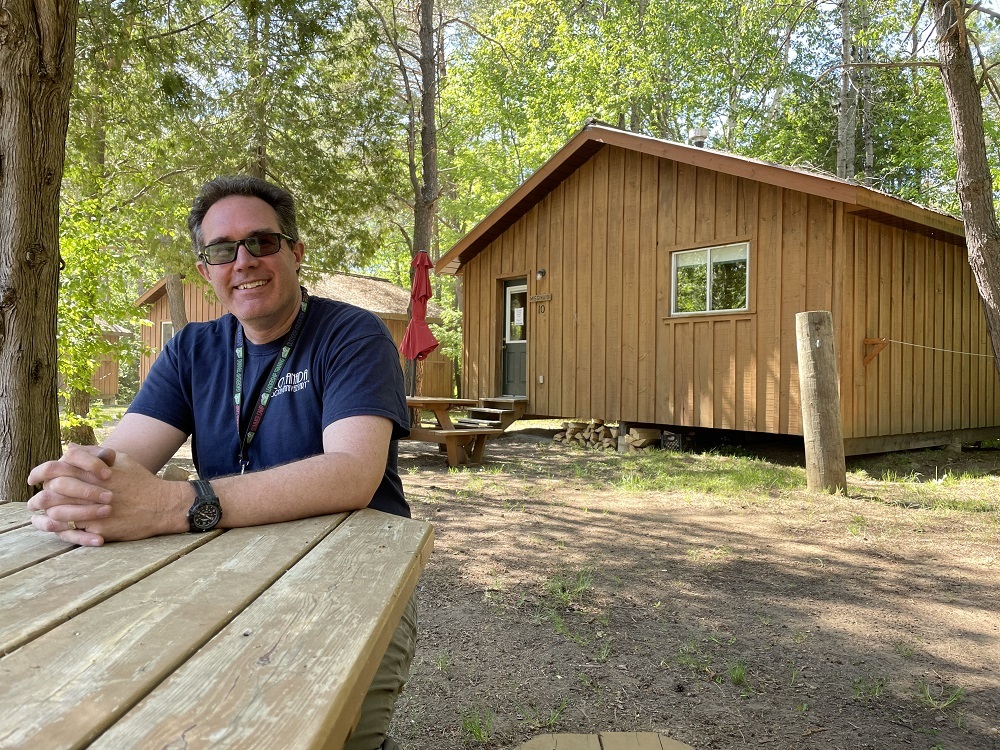 Camp Medeba is getting ready for summer camp. Though camp this year – like last year – will look quite different.

Instead of groups of kids, families will be renting out the West Guilford camp’s cabins and lodges. And any registered campers will be exploring Medeba’s adventure activities as part of outdoor-only day camp groups.

While Premier Doug Ford announced on May 16 that summer camps across the province could open this summer, Medeba said business as usual wasn’t a realistic option.

Besides a 21-page draft document, there are currently no finalized health protocols and procedures for overnight camps in Ontario.

Since Medeba hosts about 225 kids each week during the summer, as well as many school and church retreats during the year, the camp needs time to plan and prepare programs and registration. Archibald said that his team decided re-hiring staff, training, and firming up COVID-19 protocols would be too much to do before camp begins.

Not to mention that Medeba’s summer programs are usually full by the beginning of May.

“We were sad, and it was a difficult decision,” said Archibald. “There’s nothing else like overnight camp – the things you experience. It’s an incredible experience in their lives.”

But family camp, and an extended day camp program, will take centre stage.

Families will have the chance to do activities like archery, swimming and mountain biking. There will be a takeout food service from the dining hall and Medeba’s staff are working to prepare picnic tables and barbecues for each cabin.

So far, Archibald says the summer is looking promising: their day camp is booking fast and one-third of the cabins are booked for the summer.

“We’re just thrilled we can do something,” said Archibald. “This has been great from that perspective.”

“We need quite a bit of runway time,” said Andy Gruppe, Wanakita’s general manager. “There’s a lot of things we need to start planning for much early in the year.”

He said Wanakita was in the process of onboarding summer staff for this season – they usually hire about 200 seasonal workers – but uncertainty about COVID restrictions made that impossible.

“The staff needed to know if they had jobs or if they needed to make the call if we were going to be able to operate,” said Gruppe.

Both Archibald and Gruppe said that the draft guidance protocols for summer camps look effective. Those include cohorting, masking, and a safety plan each camp must submit to their health authorities.

But to put those rules in place last minute, “wasn’t something that we could necessarily do,” said Gruppe.

Now, families can come for a physically distanced “Wanakita Family Lodge” where families stay and play in their own groups.

It’s been a difficult year financially for both Wanakita and Medeba. Archibald said that without school groups and other year around guests, as well as no overnight camp, they’ve lost an average of $100,000 a month in revenue.

But the camp’s extended community has pitched in: he says a community fundraiser has raised over $400,000 to bridge the “COVID divide.”

While most large camps have made the choice to halt overnight camp this summer, certain smaller camps like Camp Hockey Haven, on Kashagawigamog Lake, are able to pivot quicker to new health guidance if it arises.

While he said not knowing what would be allowed for so long was frustrating, he understands how the spike in COVID cases in April caused indecision.

“Things were getting out of control,” he said.

Camp Hockey Haven will enforce cohorting – grouping campers together for their whole stay – as well as masking and distancing.

“I think the kids have had a lousy year: physically, mentally,” said Binnie. “All they’ve been told is ‘you can’t do this; you can’t do that.’

“The benefit outweighs the risk,” he said. Nation-wide, experts are sounding the alarm over the impact COVID-19 has had on children’s mental health. In a recent Study by SickKids, 70 per cent of children surveyed reported a drastic dip in mental health over the past year.

Just like Archibald and Gruppe, Binnie said doing camp – even if it will look different this year – gives kids a shot at some sort of normalcy.

In an emailed statement, the Haliburton, Kawartha, Pine Ridge District Health Unit, outlined how camps will be permitted to reopen in stages: step 1 would see day camps opening on June 14. Step 2 would allow overnight camps to reopen in early July.

“Upon opening, day camps and overnight camps would have to follow certain rules and requirements to prevent COVID-19,” wrote Bernie Mayer, the unit’s health protection manager. “The Haliburton, Kawartha, Pine Ridge District Health Unit is currently working with local recreational camps to outline what is required.”

What you need to know about Haliburton County reopening