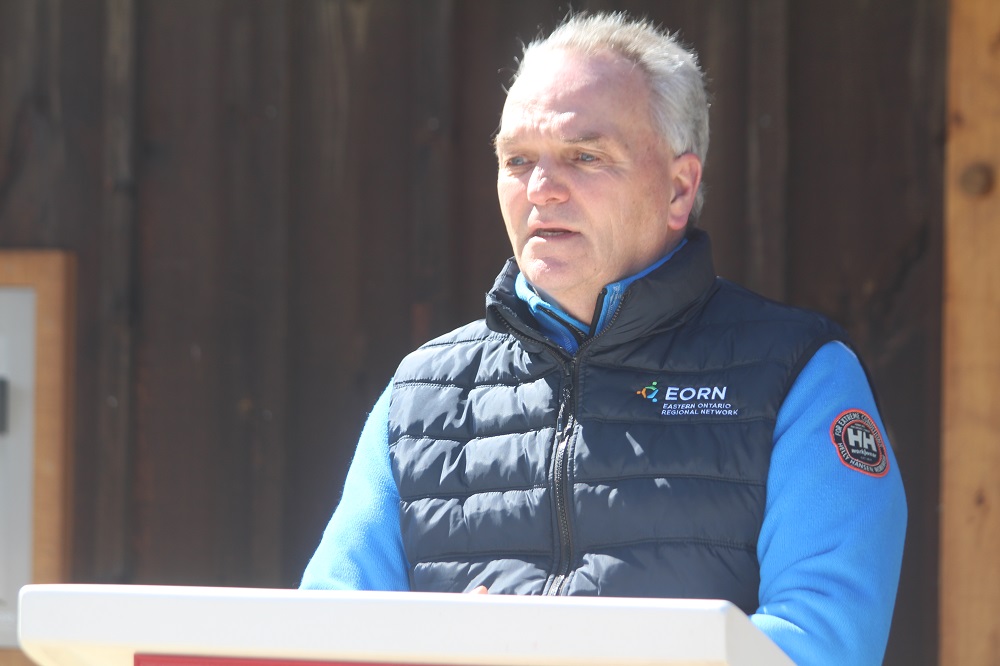 Haliburton County and other eastern region municipalities are ramping up lobbying to get provincial and federal backing for better gigabyte internet speeds.

Heads of council throughout the Eastern Ontario Regional Network (EORN) area met May 4 to discuss the state of the Gig Project. The proposed $1.2-$1.6 billion initiative would deliver gigabyte download speeds, above the 50 megabytes per second (Mbps) download/10 Mbps upload minimum promised by the Government of Canada universally by 2030.

EORN is seeking $200 million each from the provincial and federal governments, which has yet to come.

County Warden Liz Danielsen said May 6 she was worried about whether the funding would happen.

“Seems to be becoming more and more tenuous,” Danielsen said.

EORN formally submitted the proposal to upper governments March 1. The remainder of the dollar total would come from municipalities, the private sector and the Canada Infrastructure Bank.

Chair J. Murray Jones said 50/10 speeds would be outdated by the time they get built. He said governments should no longer delay the Gig Project file.

“We’re not going to stand by and let the two governments not make some action here,” Jones said.

Scott: Ontario ‘all in’ on broadband

Provincial Minister of Infrastructure Laurie Scott told The Highlander Ontario is investing heavily in broadband, with nearly $4 billion over six years and plans to provide reliable high-speed internet everywhere by 2025. But she did not address the Gig Project specifically.

“In terms of our commitment to improving broadband access to the residents of Ontario, I can tell you that our government is leading the way,” Scott said. “Ontario is all in on broadband.”

In a letter, EORN argued its funding ask is only a small portion – 5.7 per cent – of the combined $7 billion available at the federal and provincial levels for broadband expansion. The letter also said about 30 per cent of underserved households in the province are in rural eastern areas.

Jones said despite meetings with Scott and the federal Minister of Women and Gender Equality and Rural Economic Development Maryam Monsef, he has been unable to get a straight answer.

“I’m not criticizing any one of them. They have a lot of staff and bureaucrats in the background trying to give advice,” Jones said. “I’m very confident, to be honest with you, that both Mary and Laurie understand the situation.”

Jones said municipal officials across the region are backing the lobbying effort. He said EORN can do the work better than any private-sector alternative.

“There is life outside the big city limits,” Jones said. “EORN has a track record. We know how to do it; we’ve done it before.”