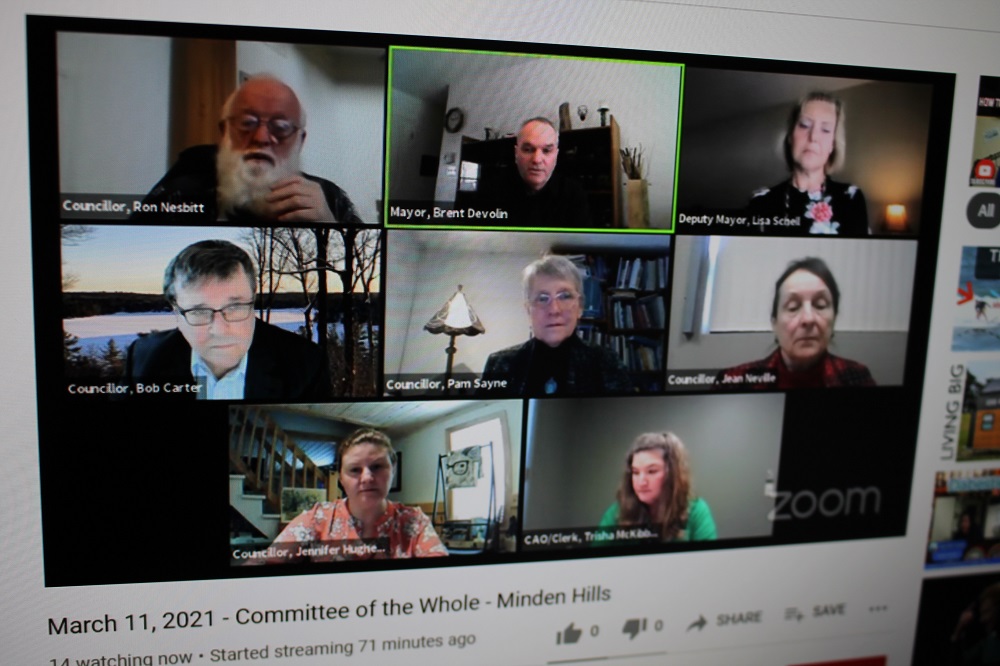 One Minden Hills taxpayer did not hold back during a public meeting on the 2021 budget – ripping into council for axing the reconstruction of Bobcaygeon Road from the final draft.

However, Coun. Bob Carter, who largely drove the decision not to borrow the more than $2 million to fix up a section of Bobcaygeon Road, defended council’s record on roadworks since 2017. No staff or councillors spoke to the CSD decisions.

Council removed the Bobcaygeon Road project during its final budget deliberations. The project would not have impacted the 2021 budget, with repayments of a planned loan beginning in 2022. Council subsequently landed on a tax levy increase for the year of 3.75 per cent.

Peacock said, “Once again our roads department is taking the hit and having a major construction cut.”

She said she drove the road twice last summer and was “appalled” at its condition, adding “no wonder the people who have to travel it every day complain.”

She further commented that, “The longer you delay a project, the more it is going to cost you in the long run. Yes, I realize that borrowing the money to fix this road will affect the budgets in years to come but when the township has the opportunity to debenture this project with low interest rates being offered now by Infrastructure Ontario it seems to be very unwise that they do not do it.”

When the new arena is finally open to the public, Peacock said people from Bracebridge and Gravenhurst will drive the Bobcaygeon Road from Highway 118 and, “what a disgrace to this township when they reach this part of the road. Not a very welcoming site entering our town.”

Peacock said she had supported the township and its decision-making for years, “but this past year I have questioned some of the decisions that have been made both internally and publicly and because of that I am starting to lose confidence in this township and the council.”

He added as the infrastructure gap continues across the province, the township needs a full roads report and assessment so staff, council and the public can decide how much to invest in roads going forward.

“We’re not decreasing our investment in roads, we’re not ignoring roads, we’re spending more on roads but there’s a limit to how much can be spent,” he said.

Coun. Pam Sayne said while the reconstruction is not happening, engineering studies are going ahead “so, it’s not like we’re not doing it. We all see those as important and we’re looking forward to the assessment for all of our roads so we can make a very good decision on future management of this whole package.”