While the Haliburton County community is relieved that no residents or staff have so far tested positive for COVID-19 at Hyland Crest long-term care home in Minden, some have questioned whether the health unit was overly alarming in pronouncing it an outbreak Jan. 31

Haliburton Highlands Health Services (HHHS) confirmed in a media release Feb. 1 that the Haliburton, Kawartha, Pine Ridge District Health Unit had declared the facility to be in outbreak. HHHS attributed that to two positive cases among essential caregivers – who are not staff.

Caregivers are a type of essential visitor who are designated by the resident and/ or their substitute decision-maker and is visiting to provide direct care to the resident. Examples include supporting feeding, mobility, personal hygiene, cognitive stimulation, communication, meaningful connection, relational continuity and assistance in decision-making.

If you look at Public Health Ontario websites, the health unit was technically correct in declaring it an outbreak.

However, it wasn’t really until Feb. 3 that acting medical office of health, Dr. Ian Gemmill, suggested it was more of a “situation” at Hyland Crest. He said it was distinct from larger spreads in other longterm care homes affecting staff or residents. He also elaborated that the two essential caregivers who tested positive had no symptoms and were not ill.

However, as asymptomatic people can still spread the virus, he said they couldn’t take any chances.

What this meant is that residents and their families, and no doubt staff and their families, were left in a fearful state for the better part of a week. It might have been good had the initial release been done jointly by HHHS and the health unit to explain some of the fine detail, for example, that it was visitors, that they had no symptoms, and that it was considered more of a situation than an outbreak.

Of course, hindsight is 20:20 but what we have to keep in mind is that the health unit exercised extreme caution and it is hard to fault them for that. Along the same lines, we can do nothing but praise HHHS for having so far kept COVID-19 away from residents and staff at its two long-term care homes, Hyland Crest and Highland Wood.

While it seems like years ago now, it was only in the late winter and early spring of last year that Pinecrest Nursing Home in Bobcaygeon was in outbreak, costing 28 lives.

Here in Haliburton, we have had zero cases among residents and staff. Zero.

While in some ways, we are lucky to live in a rural setting not a hot spot, we have to give credit where credit is due. It is because of the work of management and staff at HHHS that our long-term care homes have remained COVID-free with the exception of the two essential caregivers.

And we know from talking to family council members that this scare has only seen management and staff double down even further with COVID-19 protocols. And for that, we thank them all on behalf of our frail, elderly and vulnerable loved ones. 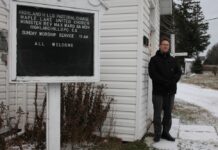 Confirmed active COVID cases down to one in Haliburton