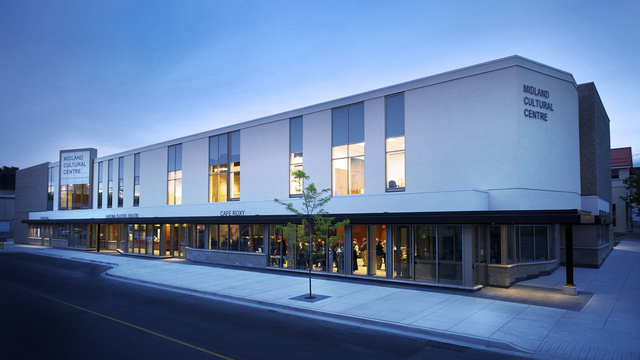 The man behind the vision of bringing an arts centre to Haliburton County says one model they have looked at is the Midland Cultural Centre.

Daniel Manley, Wil Andrea and Brent Wooten formed the fledgling foundation in the Spring of 2018. Manley said it came about after orchestra rehearsal get-togethers on Friday afternoons. Michael Clipperton is also on the team.

“There was quite a bit of talk of looking for a place that would be good for us to play in and how the County needs it,” Manley said.

The HHACF was incorporated that December, developed a logo and website, has now been designated a charitable organization, worked with U-Links on a needs assessment, and secured a $5,000 grant from the Haliburton County Development Corporation. That allowed them to hire Melissa Johnston to synthesize and add to the Fleming College students’ report, which is due soon. They’ve also met with arts organizations and held a roundtable discussion and workshop.

Setbacks have included an unsuccessful bid for a $75,000 Ontario Trillium Foundation grant and COVID-19.

Despite that, Manley said the fiscal year 2020 was a very successful one since, “our three main goals were to officially become charitable, raise awareness of the HHACF within the local community, and to kick-off research.”

He said although they would like to see an arts centre built as quickly as possible, feasibility studies and business plans are essential to understanding what will be the right fit for the County and sustainable in the future.

He said goals for 2021 include growing and developing the board of directors; developing a strategic plan including fundraising, and raising awareness.

Tammy Rea and Beth Kipping were acclaimed as new board members.

Rea said, “I’ve just been on public record for about the last 20 years saying this is my dream before I die so I guess I better put up.”

She added with her HIFF family, including Marci Mandel and Lisa Kerr, “when we go to a film festival and we’re having a glass of wine this is what we always talk about so the whole movie committee is really strongly behind this.”

During a question and answer session, it was asked if there was a possible location in mind. Manley said they have some potential candidates but aren’t ready to reveal at this time. They were also asked about their vision.

“We’re trying to cover and include as many facets of the performing arts as possible,” he said, adding it will come down to funds and sustainability. However, he mentioned ideas such as acoustic shelling, theatre, orchestra pit, rehearsal space, office space for arts groups, a shared library of music, gallery, meeting and small conference space, audio and video for movies, a lobby for drinks at intermission. If in a downtown urban centre, possibly a café.

“Make it lived in, so it’s always used.”

One attendee suggested they study centres in other communities, such as North Bay, Parry Sound, Huntsville and Bracebridge.

Clipperton added they have also talked about teaching space and studios.

As to timeline, Manley added it will depend on funding, and could take five to 10 years.

“We want to build an arts centre for all and together we’ll reach that goal,” Manley said.

Studio Tour returns to the Highlands