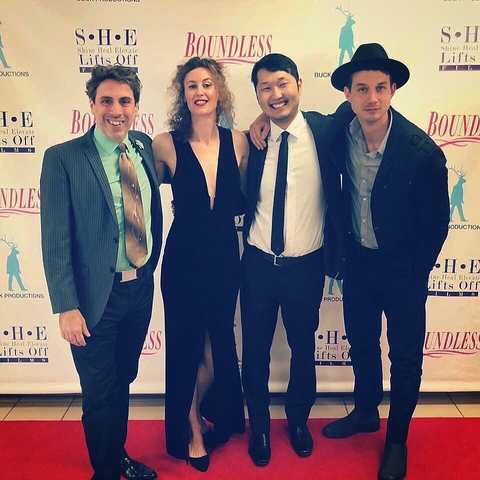 The soundtrack of Kim Campbell’s upcoming short film, Boundless is going to have a Haliburton County flavour after nine Haliburton County Folk Society (HCFS) musicians worked with Nick Russell to piece together a unique pandemic project.

Russell said he was contacted by the Haliburton filmmaker about the use of his equipment at the Haliburton Guitar Studio to record orchestral instrument tracks for the film score.

He’d known Campbell for years, but had only become reacquainted when she’d asked him to play guitar on a few dates with herself, vibraphonist Nick Mancini and bassist Robert Lee at the Drake in Toronto. That was followed by a concert at the Northern Lights Performing Arts Pavilion. The shows were part of a promotion and fundraising campaign to solicit donations for production of the film.

Russell said the score was composed for a small orchestra in Los Angeles by Kanoa Wolfe-Doblin.

“The full score and its respective parts were emailed to me along with an audio recording for reference,” the local guitarist said.

“Having the equipment and top-quality microphones for acoustic instruments in Haliburton to manage the task, and with the HCFSs kind support, I was hired, as were nine different local musicians, to record the entire orchestra part-by-part and one musician at a time.”

Russell said it is a very unusual way to record an orchestra. Usually the instrumentalists would be playing together in a room. However, as they needed to adhere to COVID-19 protocol and public health recommendations, it seemed to be the only way they would get it done by the target date.

“Each musician was set up with their part and they played overtop of a VSTI-generated score (virtual studio technology instruments) so they’d have a reference as to the dynamics, tempo and overall feel of the particular piece,” Russell explained.

After he recorded all of the parts, he did some rough editing and sent each individual track, called a ‘stem’ in the studio world, back to L.A. to be mixed into the final score.

“It was a great and fun experience. I was able to connect with so many local musicians who were able to collaborate and make music together – but apart – during the pandemic era. It was also refreshing to be pushing the buttons on the project and not doing the playing,” he said.

He has not yet heard the final mix but suspects it is nearing completion.

“I am looking forward to seeing the entire project, with the finished film in the coming weeks.”