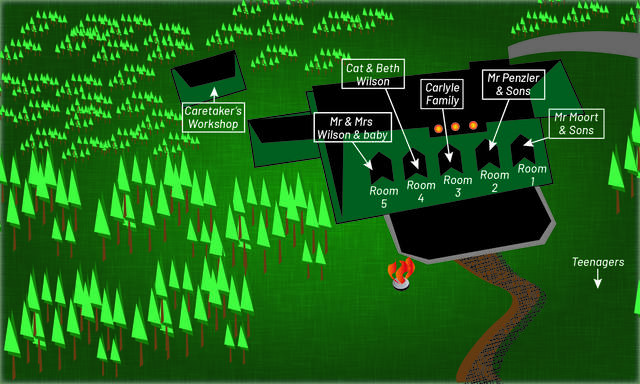 Detective Harry Harp opened the envelope containing newspaper clippings that librarian Brigitte Cave had collected for him. The photocopied articles spilled out onto his desk and he flipped through them until a photo caught his attention. Staring at him was a black and white image under the headline: Pines End Guest Disappears. A circle had been graphically placed around Rand Carlyle’s head. And sure enough, he was wearing a white V-neck sweater with a border. Nylon threads from that same sweater had been found on his partially mummified body. Harp had seen photos of Rand Carlyle in the original case file but seeing him with the other guests suddenly brought the half-century-old world of the crime into sharp focus.

The photographer had posed the group formally with the adults standing in a row. Trudy Carlyle stood next to her husband, both hands clinging to his arm. Beside the couple stood two men, then a couple holding a baby. Teenagers sat cross-legged at the adults’ feet and Harp could easily spot Cat Wilson by her haughty, upturned chin. Next to her was a smiling girl, then four boys, including Brett Penzler, who, as a teenager had shaggy, centre-parted hair under a flowered headband. Next to him sat the two Carlyle girls. On the photo’s white margin someone had written in cursive: Simcoe Day, 1970.

Harp grabbed the original case file and pulled a yellowed piece of paper from it that was covered in a scrawl of numbers. He laid the page next to the photo and peered at both, as if trying to decipher some hidden meaning.

Just then Constable Terry Becker walked into the room.

“Look at this.” Harp held up the photo. Becker looked at it then at the scrawled page.

Harp said, “George Maclem’s notes. I think he was trying to solve the case through numerology.”

“I hope we get further than he did.”

Harp scratched his jaw. “Just seeing this photo with all the guests gave me an idea—.”

Becker’s phone buzzed and he answered it.

“Hi, Brett. Thanks for calling back,” the constable said as he dropped into his seat. “In the interview, you said someone took Mr. Carlyle fishing. Do you remember who that was?”

Becker nodded, frowned, then thanked Brett Penzler and hung up.

“What did he say?” Harp pushed aside the numerology project.

“Apparently there was a kid on staff they called ‘dogsbody’ because he did all the lowest-type jobs. Penzler said the lodge owner even had a whistle he used to blow to get the kid’s attention.”

“Sounds humiliating,” Harp said. “What was the kid’s real name?”

The constable added the nickname to his white board diagram showing the lodge, its guests and the only staff that had been named in the original case file—the owners, Mr. and Mrs. Muir.

“So what was your idea?” Becker said. “About the numbers?”

But Harp’s phone buzzed before he could respond. The detective answered it, listened, then thanked the caller and hung up.

A few moments later, Harp and Becker sat across from a woman in her late 60s. She had black hair pulled back in a tight ponytail and was wearing black tights and a black sweatshirt.

“Crystal Corrigan,” she said. “I waitressed at the lodge that summer. Saw your call for help though I don’t know how much help I can be. And how’s your mom keeping, Terry?”

Becker said that his mother was well and after some preliminary discussion, Harp asked her if the expression ‘dogsbody’ meant anything to her.

“Oh gosh. The poor Barley boy. I haven’t thought of him in years. That was his job and it became a nickname, I guess. Cruel,” she said.

“What was the boy’s full name?” Becker asked.

Crystal looked up at the fluorescent lights then back at the two men. “Adam, I’m pretty sure. Yes, Adam Barley.” She nodded. “Irene’s boy, as I recall. She worked in the kitchen and doted on him. Always sneaking him treats.” Crystal smiled.

Becker showed her the picture of the fridge. “Have you seen this before?”

Crystal laughed. “Seen many of those old clunkers. But yeah, there was a pair of them in the Pines End kitchen before Muir finally splurged on a big electric fridge.”

Harp said, “Two fridges? Who would have disposed of them?”

“Stan Barley. He was the caretaker. Dogsbody—I mean, Adam’s dad. And you can ask him yourself. He’s in Golden Villa.”

Half an hour later, Harp and Becker found Stan Barley in the Golden Villa dining room. Sitting in a wheel chair, the man was hunched over a plate of meat and potatoes.

They introduced themselves and Barley peered at then, watery dark eyes narrowing imperceptibly.

“Mr. Barley, we’re investigating the disappearance of Randolph Carlyle from the Pines End Lodge in 1970. You worked there at the time.” Harp said.

He had white hair brushed back from his forehead and though he was physically diminished by age, he was a large man.

“Your wife and son worked there, too.”

“Yes,” he said again then steered some potatoes into his mouth.

Becker said, “Where are they now? In town?”

“We found Rand Carlyle’s body in a propane fridge. You disposed of the fridges. Did you kill Mr. Carlyle and stuff his body into one of the fridges?”

“I read the paper.” Barley sniffed. “I know what you found.” He wrestled a piece of gristle from between his teeth and dropped it on his plate. “Muir took the fridges to the dump.”

Stan Barley unscrewed the back plate from a transistor radio. It was Cat Wilson’s and she’d dropped it in the water and had demanded that he fix it.

“You’re a caretaker. Take care of it,” she’d said laughing.

“Little brat.” He blew on the damp insides.

“Shouldn’t have a radio near water in the first place. That’ll teach her. Though some there’s no teaching—.”

Just then, a crying sound caught Stan’s attention and he started from his seat. Opening the doors of his workshop, he took a few steps then stood still, listening. Quick footsteps behind him made him swing around and suddenly his wife, Irene was in his arms. Her face was chalk white and a garbled stream of words poured from her mouth.

Gripping his arm, she pulled him into the woods a few paces, then a few more. Stan’s eyes didn’t need to become accustomed to the dark—to see white. Rand Carlyle lay on the ground, his clothes ghostly bright though punctured and seeping darkness.

Irene’s small, pleading hand gripped Stan’s and just then Cat Wilson’s words came back to him. “You’re a caretaker. Take care of it.”