Home General News From Trump to racoons at Stanhope Airport 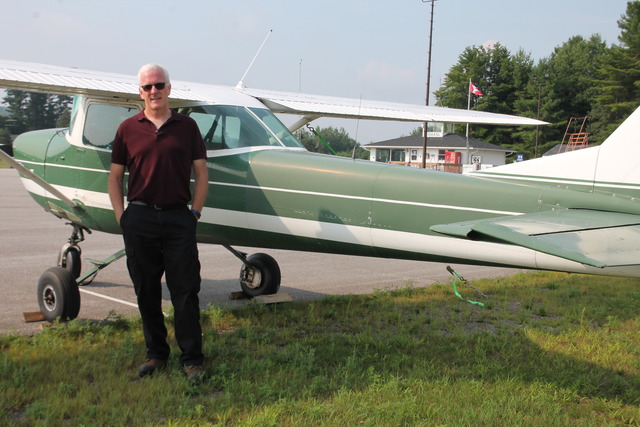 Algonquin Highlands’ new airport coordinator says that depending on your politics, his “one claim to ill fame” is having worked for Donald Trump.

Steve Dewey said the now-US president kept helicopters at Teterboro Airport, where he worked, and which specializes in business aviation and charter operations, just 12 miles from midtown Manhattan.

“Everything they say about him is true,” Dewey says with a chuckle. He said he saw him on many occasions but the two never spoke. “You don’t talk to The Donald.”

The airport is close to the Old Meadowlands Entertainment Facility, so celebrities came and went, Dewey said, including Robin Williams.

“He was a wonderful guy. He spent time, when he was waiting for his ride, and hung out with the guys for awhile. Just a crazy, manic, friendly, super nice guy.” By contrast, Dewey said he encountered some VIPs who were “genuinely evil.”

It’s a long way from Teterboro Airport to the tiny, municipally-owned and operated Stanhope Airport in Haliburton County but Dewey couldn’t be happier to be here.

Although he has lived in Canada and the US, Dewey said he’s always had a connection to the Highlands, spending summers with aunt and uncle, Karen and Bruce Turner in the Donald area. He moved here permanently in 2015. His wife is local artist, Rossana Dewey and the two have made West Guilford home.

“I’ve always had a special place for Haliburton in my heart,” he says. “With all the places I’ve been, I always seem to come back here. It’s wonderful.”

He’s been at the airport about a month now.

“I think the biggest conspiracy here,” he says as he glances out the airport window “is how to keep the racoons from getting into the garbage.” He goes on to share how just that morning he had a whole bunch of geese “partying on the runway” so they had to scare them away with the screamer.

“So, I woke up the neighbours and got rid of the geese at the same time.”

There’s also a family of foxes.

All joking aside, he said there is plenty to do at the small airport to keep him busy. He brings with him the experience from Teterboro and stints at Toronto Island Airport and Pearson International Airport. His background is business aviation and his speciality is fuels. He said there is an older plant at the airport they want to upgrade and he is assisting with that. In addition, “I’m a bit more nuts and bolts. I’m a bit more ground-oriented. Not so much the high management level but more the customer service, the product quality, the airport maintenance, that sort of thing.

“So many things have to be done on a daily basis, fuel quality, and the buildings don’t take care of themselves. I just changed a light assembly on the runway.”

He is also keen to ensure good communication with, and reporting to, the municipality.

“I’m used to this,” he adds of Stanhope Airport. “I’m used to small field operations but not at the municipal level. Coming here was a treat, actually. I’d been out of aviation for awhile but it’s like putting on an old pair of shoes again. It just feels right and there’s a lot of potential at this airport.”

With COVID grounding a lot of airport traffic, he said he has been considering ways to attract more pilots and make the airport more of a tourism hub post-COVID. He said it used to be “hopping’ with weekend fly-ins, and a kids’ program.

“I think what it really needs is the people. The COVID thing kind of put everything belly up. Traffic is starting to come again. I’ve got things on the burner I have to bounce off the actual airport manager and see if they want to play ball.”

Some of those things are a deal with Enterprise for car rentals. One idea is a pilot painter weekend, where they set up tents for plein air painting. Another is a foodie flyin, with local restaurants coming out to the airport. Having events in conjunction with antique cars is yet another idea.

“With my own promotions background, I can bring to the table what they need to make the airport a little more shiny … to make it a little more attractive to pilots to come in here. It’s more that just saying we’re here, it’s what do we have here.”