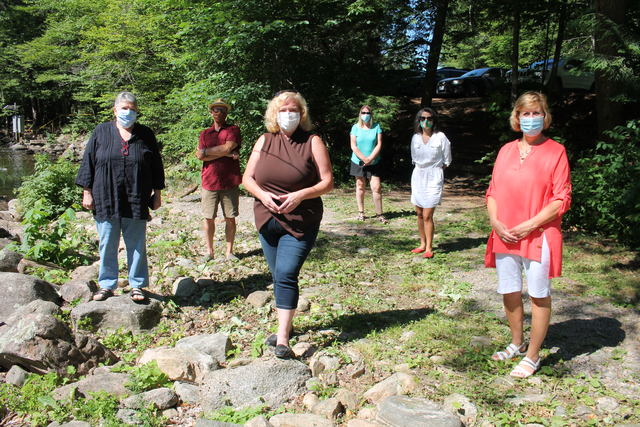 Minister of Heritage, Sport, Tourism and Culture Industries, Lisa MacLeod, toured the Haliburton Sculpture Forest and the Minden Whitewater Preserve July 9 but an anticipated funding announcement for the tourism region was postponed to a later date.

The Ontario’s Highlands Tourism Organization (OHTO) Region 11, of which Haliburton County is part, was passed over this time around with Region 8 getting $1.4 million, in an announcement in Bobcaygeon later in the day.

Nicole Whiting, executive director of OHTO, said they were disappointed Region 11 will have to wait “but at the same time, we’re so excited and honoured that she [MacLeod] actually made a trip to the area.”

Whiting added they knew going in that MacLeod’s schedule was going to be fluid, and the change of funding regions was “no reflection of her support of the area and her commitment to funding.”

Whiting said it was logistical and “she has agreed to come back to our region … I think it’s great. I’m very happy.”

MacLeod said “the funding announcement will happen at a later date.”

She said her ministry is travelling the province, and investing $13 million in hyper-local marketing.

“So that communities such as the Haliburton Highlands will be able to start getting their neighbours to start reconnecting in their own community.

“We recognize international travels will not return for another couple of years, and as inter-provincial borders are still restricted in some cases, we don’t expect a lot of domestic staycations, so this year we’re going to be rediscovering and reconnecting in our own communities, which is why I’m here today to demonstrate that you can safely take in a tourist attraction in phase 2 of COVID-19s economic recovery and support the local community.”

MacLeod went on to say the marketing campaign is geared at, “you do not have to leave your community to have an impeccable summer vacation. And it’s safe to do so right in this community. Why wouldn’t you want to? If I could stay for a week, why wouldn’t I?”

Director of County tourism, Amanda Virtanen, said she is hearing from operators that the industry has improved in stage 2. However, she said there remain a lot of challenges.

“We’re looking forward to the RTO 11 announcement. It’s been great having the minister here and being able to feature some of the best stuff in our region, having seen the sculpture forest and the whitewater preserve. The fact she is coming back will be great for us.”