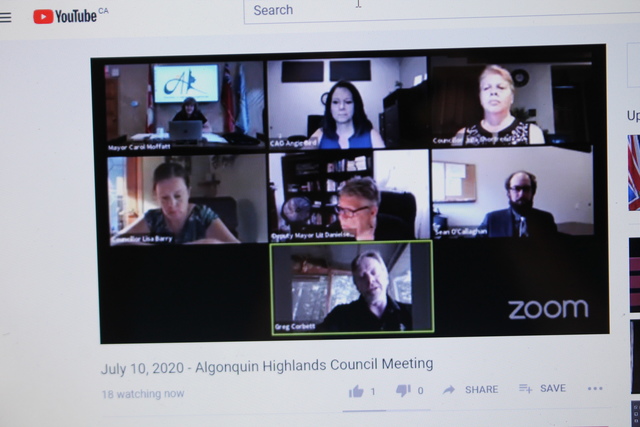 It appears the Township of Algonquin Highlands will take some measures to regulate short-term rentals following a July 10 meeting.

After a presentation by consultant Greg Corbett of Planscape Inc., a majority of councillors indicated they did not want the status quo. The township’s Official Plan, and comprehensive zoning bylaws, now contain no specific policies related to short-term rentals (STR).

Coun. Jennifer Dailloux declared a pecuniary interest and left the meeting as she co-owns and operates tourist accommodation.

The definition of STR typically applies to renting for less than 30 days in a residential dwelling, not hotels, motels, tourist establishments, or bed and breakfasts. In Algonquin Highlands, STRs are primarily associated with cottage rentals.

Corbett said he did a review of various online rental platforms, and identified approximately 100 in the township. However, Mayor Carol Moffatt suggested it’s likely three to four times that.

Corbett said some of the impacts of STRs can be positive and negative. The cons include overloading of sewage disposal systems, but he suggested that licensing could place a limit on the number of guests permitted. Parking is another issue, but a greater parking requirement could be established. He noted the township already has a noise bylaw. Other issues include building code and safety; the effect on housing affordability; compatibility; and unfair competition with traditional accommodation providers.

On the plus side, he said they did create: increased accommodation options; additional income for property owners; and benefits to the tourism sector.

The other three municipalities in the County are currently in the midst of reviewing STRs but have not put any regulations in place.

Moffatt said, “The challenge around this issue and what makes it so problematic is there’s all kinds of people who are just very quietly, happily renting properties and people come and spend time there and they have a bonfire, make S’mores and swim in the lake. They’re just living a normal life. It’s the bad people and some of those bad actors are the landlords.” Moffatt added.

“Of the greatest concern … it’s not that people are necessarily upset that a cottage next door might be a rental property. It’s the behaviour of those renting it. It’s the conduct of people … We need to address those things for the safety and sake and atmosphere of our community.”

She said some people will be upset because they feel the net is being cast too wide, and capturing the good renters, but council has no choice. She said it’s “like nailing Jello to the wall.”

Deputy Mayor Liz Danielsen said it’s a big enough issue in the township that it warrants a public meeting. She also wanted to make sure there was a method to bring existing STRs into a “new regime.”

Council discussed establishing a dedicated email address so residents can provide feedback. The public can also email councillors directly. Moffatt said it was “early days” and no decisions were being made and there would be ample time for public input.

Moffatt, Danielsen and Coun. Julia Shortreed said they were interested in hearing more about Corbett’s proposed option of Official Plan and/or zoning bylaw amendments and licensing and they have asked him to come back with a further report. Coun. Lisa Barry concurred but did not want to entirely drop another option, which was the drafting of OP and zoning bylaw amendments, but not licensing.

Licensing would be in accordance with the Municipal Act. Under it, a township could ask for confirmation of building code and fire code compliance, and confirmation of insurance etc. Licensing further allows for the collection of fees to offset the additional administration fees and allows for the establishment of set fines for infractions.

Corbett said making changes would come at a cost to the township. He said the Town of Blue Mountains has spent about $1m on STRs since regulating in 2009. C

ouncil voted to accept his report for information.

Future of municipal airport at a ‘crossroads’