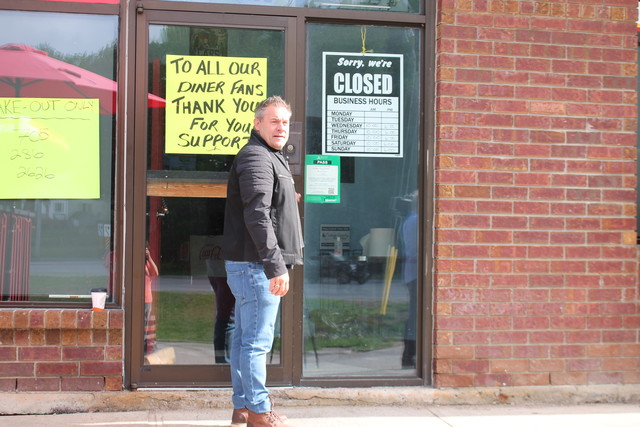 Protest ends with reverting to takeout

However, the protest was short-lived with the local eatery reverting to takeout later in the day.

Lake said, “we had nice, positive conversations with OPP and the Health Unit. They didn’t shut me down. We are continuing with takeout.”

He added he was not fined.

He said there was a sign advertising sit-down service only, but no customers were on the patio or in the diner at the time. He said they had a discussion with the onsite managers, and customers did come in, but for takeout only. Lake was called and arrived.

Ovcharovich said the fact no one actually sat down in the restaurant while they were there is why they opted for education and a warning, over a fine.

He added that during their conversation with Lake, the restauranteur said it wasn’t his intention to break the law, but to attract media attention to put a spotlight on the plight of restaurants during the takeout only orders.

“We’re emphathetic,” Ovcharovich said. “But we can’t just ignore the existing legislation. We’re all in this together. We are a small community and careless actions can affect the health of residents. He understands that.”

Lake said he knew the opening would be short-lived and the action was a protest to bring attention to all small businesses that are closed in the area, not just his.

“This was not just about my businesses. I’m fighting for all the small business in Ontario,” Lake said.

He was at the eatery at 9 a.m. along with a large contingent of staff. They waved as people honked their horns driving along Highway 35. The business’s windows were filled with neon-coloured signs reading “to all our diner fans, thank you for your support.” The first customers rolled in about 30 minutes later.

Lake owns two restaurants in the County, with his second one opening in Harcourt just weeks before the province was shut down by COVID-19. In the case of that restaurant, he didn’t have the proof required to receive the federal government 75 per cent wage subsidy.

He said he took the action this past Friday because “we’re a seasonal town. We have May, which we lost, and June is looking not too good, and we have two months to make money really. And we have zero cases of COVID as far as I last checked in the area, since the original seven cases.”

He said he feels it is unfair since big box retail stores and multi-nationals are allowed to open.

“I go to (a local store) every other day and there are people everywhere, people are only two feet apart. There is no quality control. In a restaurant, I can definitely control things. It [the openings] should be the other way around,” he said.

“We stand behind Jason,” Hope said.

Chiasson added, “we feel that we shouldn’t be under the same guidelines as Toronto. We haven’t had COVID cases up here for two months and the cases we did have are recovered. Small businesses up here can’t make it like the ones in Toronto. We won’t survive up here with closures.”

“It doesn’t bring in an income for anyone. It’s not covering the bills for the restaurant. We’re trying to take a stand for small businesses.”

She added this is a “depressed area where people can barely survive as it is and even have a job, or a seasonal job. We have to support him (Lake). We need to get up and going.”

She went on to say she feels safer in a restaurant than a grocery store.

A customer, who declined to give his name, said, “I don’t think there’s anything wrong with it. The whole town of Minden isn’t social distancing. Go in the hardware store and you run into everybody, the grocery story, everywhere.”

Businesses which do not belong to a category of essential business and continue to operate during this period risk incurring the following penalties under the Emergency Management and Civil Protection Act: