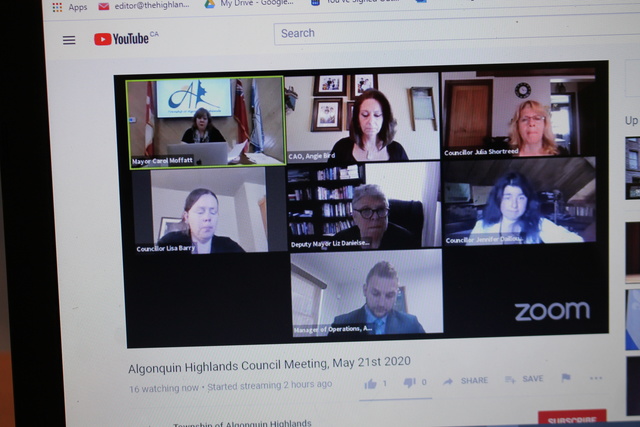 Algonquin Highlands Mayor Carol Moffatt expressed some of her concerns about the transition of the Blue Box Program to Full Producer Responsibility during a May 21 meeting.

She made her comments after operations manager Adam Thorn presented a report he’d done in conjunction with environmental coordinator Melissa Murray.

Murray said The Association of Municipalities of Ontario (AMO) has asked that councils pass a resolution outlining their township’s preferred date to transition if provided the opportunity to self-determine. She said transition timing could be between January 1, 2023 and December 31, 2025.

While the province has not yet determined what mechanism will be used to choose when municipalities transition, Murray said AMO believes it is in the best interest of councils to make their preferred transition date known.

She noted a date did not mean a commitment or that it was final. She said AMO was looking for resolutions to be passed by June 30, 2020. Council went on to pass a lengthy resolution with a date of Jan. 1, 2023.

However, Moffatt said while the transition had been discussed at a number of conferences, “the question that still cannot be answered, is there’s no logistical confirmation as to how producers are going to get their stuff back.”

For example, she asked what happens if someone lives in Guelph, goes to Best Buy there to purchase a Samsung television, and brings it to their cottage on Kawagama Lake. They then have a box to dispose of.

“How is Samsung going to get their stuff back from small rural communities all over the province of Ontario?” she asked. “They can’t quite identify that.’ “If we agree to become a collection service, does that mean we are becoming the depot and we have to figure out with Samsung how to get their stuff back to them? “None of those details have been provided by anybody so it is a process under discussion.”

Nevertheless, Moffatt said she was willing to support the recommendation, “knowing we can change our minds.” She said she recognized it was some attempt to move forward as long as it is not a trap.

Coun. Lisa Barry said from a session she attended at ROMA, it’s more of a fact-gathering exerice now rather than putting anything in stone.

Coun. Jennifer Dailloux agreed, saying, “as long as what we’re offering now does not tie us into any particular role, I see no harm in giving a strong indication of when this transition would be convenient for us.”

Murray said in her report, “it is expected that a transition to Full Producer Responsibility for the Blue Box Program will help to ensure the economic viability of waste diversion programs for the future. An economically-viable program will allow for continued development of robust environmental and sustainability plans and initiatives in the Township.”

Steering the ARC towards connections

Retirees get chance to tour new suites by lake