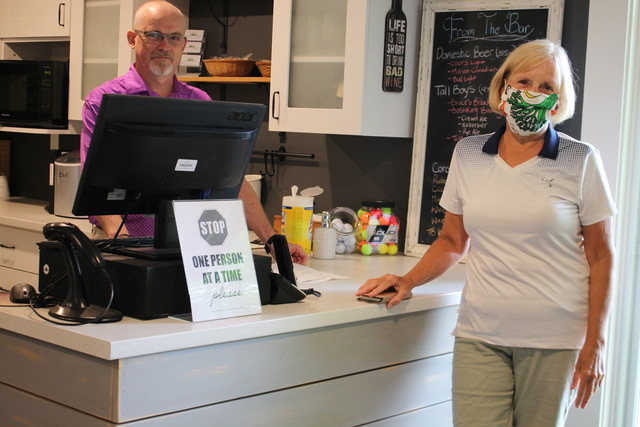 About 9:30 on a weekday morning, a face-masked Wendy Miller strolls into the Haliburton Highlands Golf Course clubhouse to pay her green fees.

In addition to the cloth mask, things look decidedly different.

There’s a big sign at the entranceway, telling golfers which direction to walk in. The chairs and tables are gone. There is hand sanitizer and wipes everywhere. The golf course has undergone a number of modifications since Premier Doug Ford announced they could reopen as part of the provincial government’s first phase of economic recovery.

“The golf course was ready to go because we were allowed to do that part during COVID-19,” owner Randall Wood said in an interview. “The concerns were about how, logistically, the clubhouse was going to work. So, we scrambled to get all of the sanitizing equipment.” He said, “literally, I have sanitation within two or three steps of every location so we’re covered that way. Now, it’s a case of following people around and being on top of it.”

He limits the number of people in the clubhouse at any time. One person comes to pay for green fees or make other purchases before someone else enters. He’s removed the tables and chairs on the patio, too. He makes the coffee, rather than self-serve. People can access the cold drink cooler and snacks but he wipes them down directly afterwards.

Outside, Wood said the golf carts have never been so clean. There are signs around the course reminding people of the new rules. The benches, garbage cans and ball washers have been removed. There are plastic covers in the cups on the greens so people don’t have to put their hands into them to fetch their balls. Most scoop them out with their clubs. No one is touching the flags.

“I think the important part is golfers need to understand the rules have changed and they need to help us a little bit as well,” Wood said. For example, one thing he is asking is that people call ahead, and not just drop in, so he can manage numbers better.

“My biggest worry is we were included in phase one but if golf courses mess this up, Ford can pull the strings at any time and say, ‘you know, this isn’t working, you’re closing down and might not open until malls and restaurants’.”

He’s even designed a COVID-19 binder for staff, including symptoms to look for in golfers. For the most part, golfers have been following the rules, Wood said.

Miller said she played her first round May 21 as part of a ladies’ golf day.

“It worked out really well. All the ladies were very respectful. We’re not letting the ball go into the cup and we’re not touching the flag. I felt very comfortable as far as the COVID problem. And it was wonderful to see all my friends.”

“I’ve been pleased so far by the turnout. Most of the golfers are respecting those rules. I’m sure they’re trying to keep themselves safe as well.”