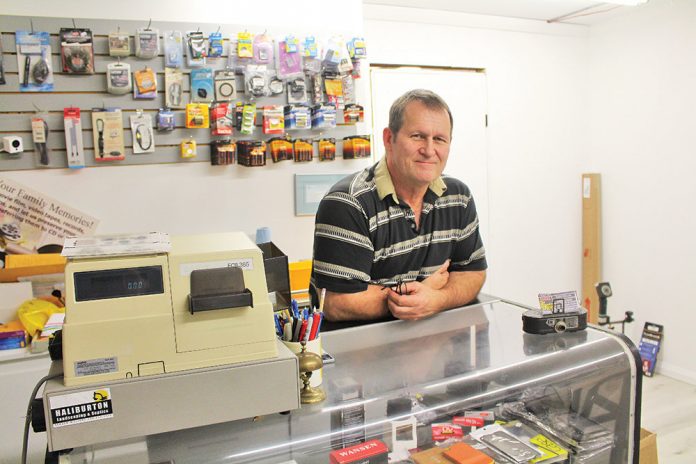 Photo Shop owner Luke Schell said moving his store from its 24-year home was easier than expected, but lamented not taking care of signage first.

“Unfortunately, that was the last thing I’ve done,” Schell said at his new storefront, situated in an alleyway at 173 Highland St. “I’ve gone from the most visible business in Haliburton to the best-kept secret.”

The move is a long time coming for the local business owner. He said he first put up his old store location – situated right on Highland Street in Haliburton – for sale three years ago. But the deal only closed Nov. 1 this year, with him opening up at his new location Nov. 14.

“We thought it would sell within a week,” Schell said. “Three years later, it still hadn’t sold. And then somebody came along and wanted it. Actually, because I think of the time I tried to sell it, I was pretty ready to leave.”

The Highlander contacted the new ownership of the old property. Ownership declined to disclose their intentions for the property. They said they hope to have the building open to the public in January but that is subject to negotiation.

Schell said he sought to move to have more flexibility in his business and help finance it.

“Work four days a week and then maybe close a week every now and then,” he said. “I have some money in the bank now that I can operate my business with. A little cushion, so that I can close for a week and not worry about someone repossessing my printers.”

Schell said he intends to keep up all of his old services at his new location, including custom frames and photo making, as well as filling a niche selling photography equipment.

“We spent some time in here fixing the place up,” he said. “We’re going to try to have a nice, bright, cheerful little location here.”

End of an era as Bishops sell Sir Sam’s