Home Life Young people must be part of solution 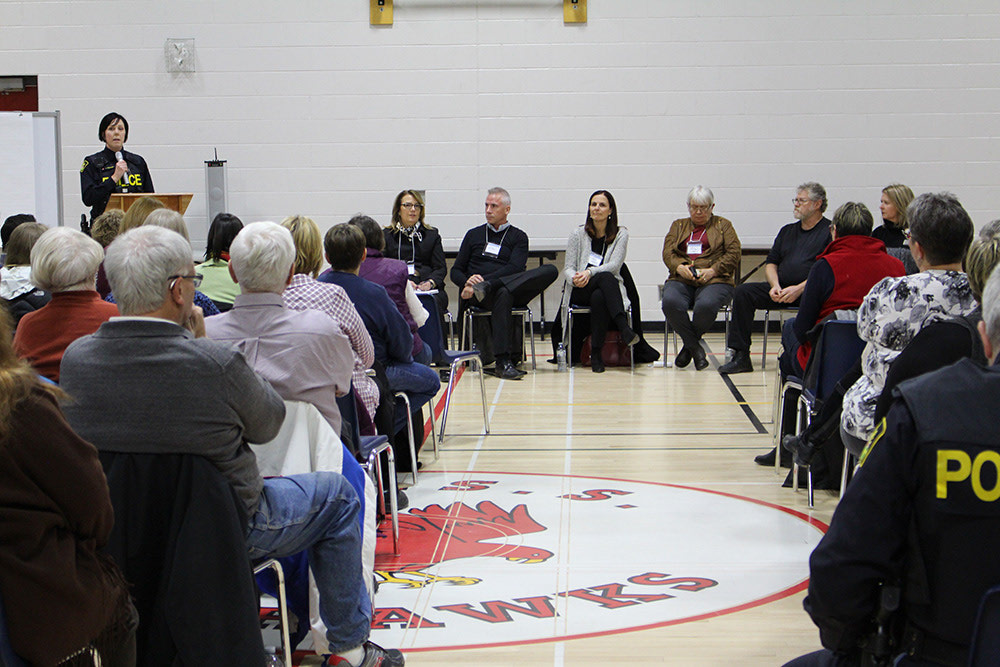 A community forum on ‘supporting youth in wellness’ was held last Wednesday in Haliburton, but despite repeated comments that young people must be part of a solution to what’s been deemed a community in crisis, The Highlander only found one student in the middle gym.

Another current Grade 12 student told the paper she didn’t know anything about the Nov. 30 ‘Hurting to Hope’ gathering. She hadn’t heard about another one, Oct. 30, at the Haliburton Legion, either.

“We haven’t been notified at all,” the student told The Highlander. The forums have been advertised for ‘all caring adults.’ But, more and more, it’s being acknowledged that students, and parents’ voices must be heard.

Haliburton Highlands Secondary School (HHSS) graduate Maddie Phippen was there last week. On social media, she’s publicly condemned the school, Trillium Lakelands District School Board (TLDSB) and the police for a lack of action on bullying, which she and others say contributed to the sudden death of Grade 9 student Phoenix Acero last May – one of the deaths that has sparked this crisis in Haliburton County.

Phippen said police have claimed that bullying reports get seriously investigated but “that is far from the truth” and “the school does not do anything.”

The TLDSB says schools in Haliburton County are tackling bullying and other issues that affect the well-being of students.

Some of the supports they offer include assemblies, restorative practices for new teachers and a mindful martial arts program (offered at HHSS), among others. They also say they work with local agencies to support students when “critical incidents” occur.

The Haliburton Highlands OPP says people must report incidents so they can conduct “thorough and detailed investigations.” They say they strive to maintain bully-free environments. If laws are broken, “criminal charges will be laid” and then it’s up to the courts to make a ruling, they say. (See related story on p. 3 by Mark Arike).

Amid all of this, educators and parents packed last week’s forum to listen to a panel of experts. Marg Cox, the executive director of Point in Time, which organized the forum, told The Highlander in an interview, “I think the TLDSB, and the high school specifically, are really trying hard to make a difference in a very difficult situation. It’s very tricky when you know a lot of information and you’re not able to share it. Parents could feel … ‘I’m not being heard, it’s not being dealt with,’ but I do know, in fact, it is being dealt with,” Cox said.

The Grade 12 student, who spoke on condition of anonymity, conceded it’s sometimes hard to prove bullying when students can use Snapchat, which erases messages in 10 seconds.

Not enough being done However, she’s adamant not enough is being done to help students deal with their emotions, or about bullying.

“We are actually not allowed to speak about what happened to Phoenix. If a teacher overhears, they’re mostly likely going to tell you, you just shouldn’t talk about it … it’s irritating.”

She added that when Phoenix passed away, students wrote on his locker but she claims the school sanded it off twice until students threatened to bring power tools to remove the locker door and give it to Phoenix’ mother, Dulce.

Catherine Shedden, spokeswoman for the TLDSB, did not address the locker issue specifically but said ways are provided for students to “respectfully acknowledge and honour a classmate who has died.” For example, a book or poster board for comments and signatures, that are then given to the family.

She said that immediately following a student or staff death, grief counsellors are available at the school for as long as needed by students.

“It is important to note that teachers are not necessarily comfortable speaking about the death of a student beyond the initial sharing of the news. Also, teachers may be asked to not have class conversations about a particular situation as this may trigger an emotional response from one or more students. Teachers direct students to the supports available at the school,” Shedden said. She added that teachers also feel the loss and students who need to talk need to go to the school guidance office.

Local counsellor Dianne Mathes told The Highlander in an interview a lot of teens have never experienced death, unless it’s a grandparent, so to lose a peer, “threw them into a lot of chaos, confusion, grief and overwhelm.”

She said when summer ended, and the shock abated in the fall, “that’s when we started seeing kids not wanting to go back to school, not being able to focus, saying ‘I can’t do this. I’m overwhelmed,’ drinking more, using dope, because at this point they’re into some very deep pain around the grief and they don’t know what to do with it so they numb it out. “She thinks “both the high school and police could be doing much more around education” when it comes to grief and bullying.

“Where do we have conflict resolution in our community? What do you do if someone steals your girlfriend and you’re really angry and upset? Well, you text. You’re mad and you say all sorts of stuff.”

The Grade 12 student told us it’s not just text bullying. She said she had a kid in class tell her to kill herself and claims “the teacher just looked at me, looked at him, looked at me and continued the lesson.”

Just the other day, she said some kids pelted her face with dimes, for no apparent reason. A friend has been fat-shamed, she said, and despite complaining, it’s been over a month and nothing’s been done. Students afraid to go to school “A lot of what we want is security,” she says. “Because going to school is terrifying. I know people who cannot go to school because it makes them feel sick because the school doesn’t do anything.”

She said HHSS has tried, but there’s been no follow through. For example, there was a grade assembly at the beginning of the year where she said kids were told bullying would not be tolerated.

They were offered a chance to send their complaints online to be dealt with. But she said they’re not acted on and kids can’t be anonymous.

She said students won’t go to the office to report bullying either since you “walk out with a target on your back the size of an elephant.”

“What I think they need to do, and what I’m hoping will happen, is that they’ll actually start cracking down on the things they said they were going to,” the student said.

Shedden said the board can’t respond to specific comments shared with The Highlander by students, other than to encourage them to speak to someone in the guidance office and “all concerns shared by students are investigated, and if necessary, acted upon.”

Dr. Ian Manion, a clinical psychologist who specializes in youth mental health and suicide, told The Highlander “suicide is a complex phenomenon associated with many factors that interact together to put someone at risk.” He said there is a link between bullying, both as a victim and as a perpetrator, and suicidal thoughts and behaviour.

However, he said, “It is not clear if the link is a direct association or related to other co-occurring factors, such as mental health status, sex and gender, social context, etc.”