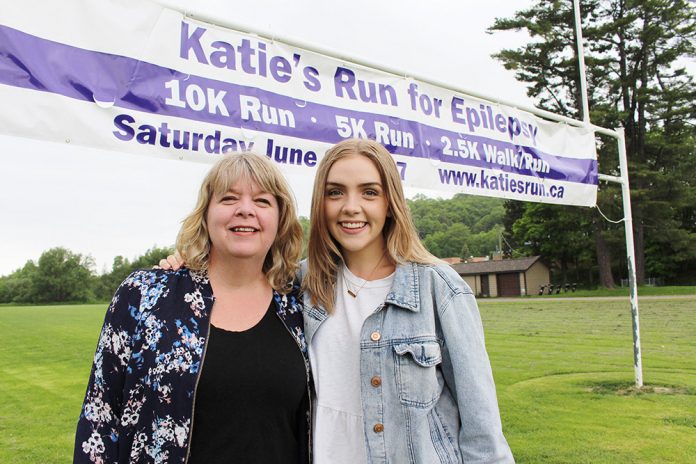 More than $100,000 is going toward finding a cure for Dravet Syndrome and other genetic forms of drug-resistant epilepsy because of Katie’s Run and the Ontario Brain Institute (OBI). Katie’s Run organizers and the OBI recently announced that almost $38,000 raised from the event will be donated to the EpLink Genetics Project, led by Dr. Berge Minassian and Dr. David R. Hampson, a professor in the department of pharmaceutical sciences at the University of Toronto. Each dollar raised was matched with an additional two dollars from the OBI, a research institute funded by the provincial government. Katie Woudstra, the inspiration for the run and walk fundraiser, is a firm believer in the project. “This genetics project is something we’re so happy to stand behind,” said Woudstra in an interview. “We see this project as something that could be so far-reaching.” Woudstra, who is from Haliburton, was diagnosed with epilepsy at the age of 16. She points out she has a genetic form—like 75 per cent of epilepsy sufferers—but it’s not Dravet Syndrome. After finding the right medications, she was epilepsy free for five years. But after facing some other health issues, the 21-year-old had a grand mal seizure last August. She was two months shy of graduating from a dental assisting programand about to move into a new home in Vancouver. “I was getting ready for my career and all this stuff, and then it completely disrupted everything,” said Woudstra. After undergoing tests, her doctor’s best guess was the seizure was caused by a combination of things. In the summer, she was diagnosed with celiac disease and had her gallbladder removed due to gallstones. Woudstra hasn’t had a seizure since. She returned to Haliburton and is focusing on helping people with epilepsy. Dravet Syndrome is a severe form of epilepsy, and people with it also exhibit cognitive and behavioural impairments, according to a press release.  “By using gene therapy techniques, our team hopes to develop a viable long-term therapy for treating Dravet Syndrome,” said Dr. Hampson. “Our deepest thanks to Geri Katie’s mom] and Katie of Katie’s Run for selecting this project and supporting our efforts.” The 7th annual Katie’s Run will take place July 7, 2018 at Haliburton Highlands Secondary School. Woudstra is grateful for the continued support from the Highlands. “We always feel supported by our county and our donors,” she said. “It’s a huge blessing to be a part of this community.”