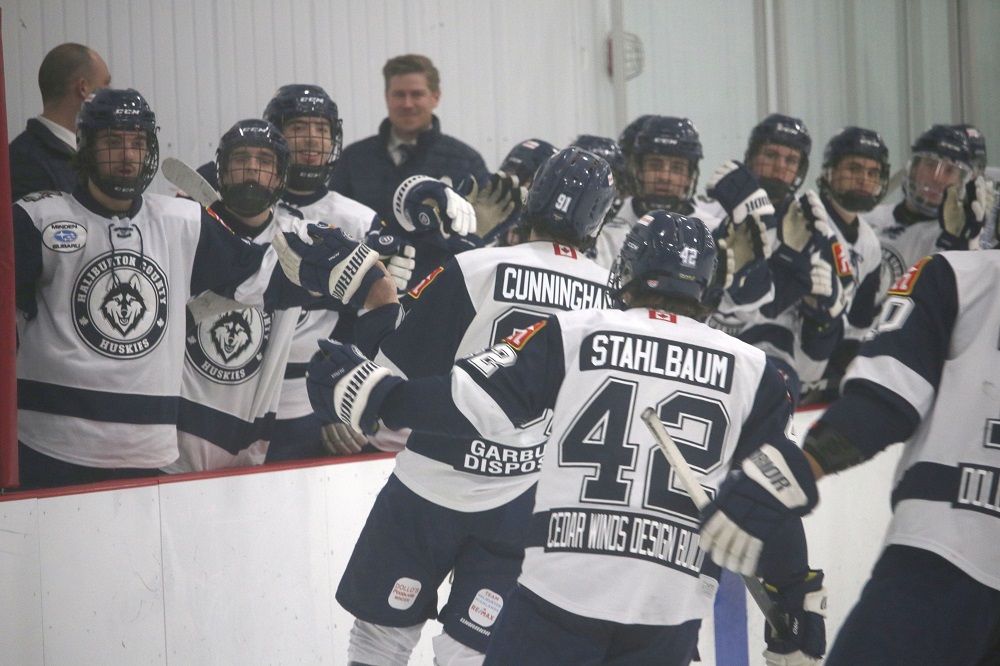 Haliburton County Huskies netminder Aidan Spooner gave his teammates an early Christmas present Dec. 17, putting together a 28-save shutout to propel the Dogs to a 2-0 home ice win over the visiting Toronto Patriots

The 20-year-old goalie, acquired in October after spending a season in the Ontario Hockey League (OHL) with the Kingston Frontenacs, made several key stops to deny a game Patriots outfit that had scored 18 goals in its previous three games.

The shutout, which earned Spooner first star of the game, was his fourth in just 16 Ontario Junior Hockey League outings.

“It’s just something you try not to think about and put to the back of your head,” Spooner told The Highlander after being asked how much a shutout starts to play on a goaltender’s mind as a game progresses.

“You just want to do your job and take things one puck at a time. Shutouts are kind of taboo; a lot of goalies don’t really think about it when they’ve got one going. It’s all about maintaining focus and not getting ahead of yourself.”

The Huskies were a team on a mission during the early stages of Saturday’s tilt, flying around the ice and repeatedly testing Christopher Quizi in the Patriots goal. That pressure paid off when, 10:29 into the opening frame, captain Christian Stevens opened the scoring, assisted by Ty Collins and Luca Rea..

A scrappy end to the period saw the Huskies miss on three powerplay opportunities, with forward Boyd Stahlbaum going closest to extending the lead.

The Huskies maintained that pressure as they came out for the second. They recorded several shots on another man advantage six minutes into the period but were denied by an impressive Quizi. Buoyed by the successful penalty kill, the Patriots pushed forward and created two glorious scoring chances but found Spooner in a stingy mood.

Just as the nerves started to seep into the stands, Alex Cunningham took centre stage. The 19-year-old hopped over the boards, skated into the slot and, after receiving a pass from Isaac Sooklal, deked out two Patriots defensemen before ripping an unstoppable shot over Quizi’s glove and into the back of the net. Boyd Stahlbaum had a secondary assist on the play, extending his point streak to 15 games.

“It was a good way for us to end things on home ice going into the break. Definitely a good feeling getting the two points and sending the fans home happy,” Spooner said.

“Our team chemistry is on point right now and we know we’re playing well. Confidence is high… we go into every game knowing we have a good chance to win.”

A pair of goals each from Stahlbaum and Cunningham, and a late empty-netter by Zack Terry, were enough to carry the Huskies to a 5-2 win over the St. Michael’s Buzzers in Toronto Dec. 18.

The Huskies go into the festive break second in the OJHL South/East division, 11 points back of the Toronto Jr. Canadiens with two games in hand. The team will be back on home ice for a double header next weekend, taking on the Mississauga Chargers Dec. 30 and the Aurora Tigers Dec. 31.