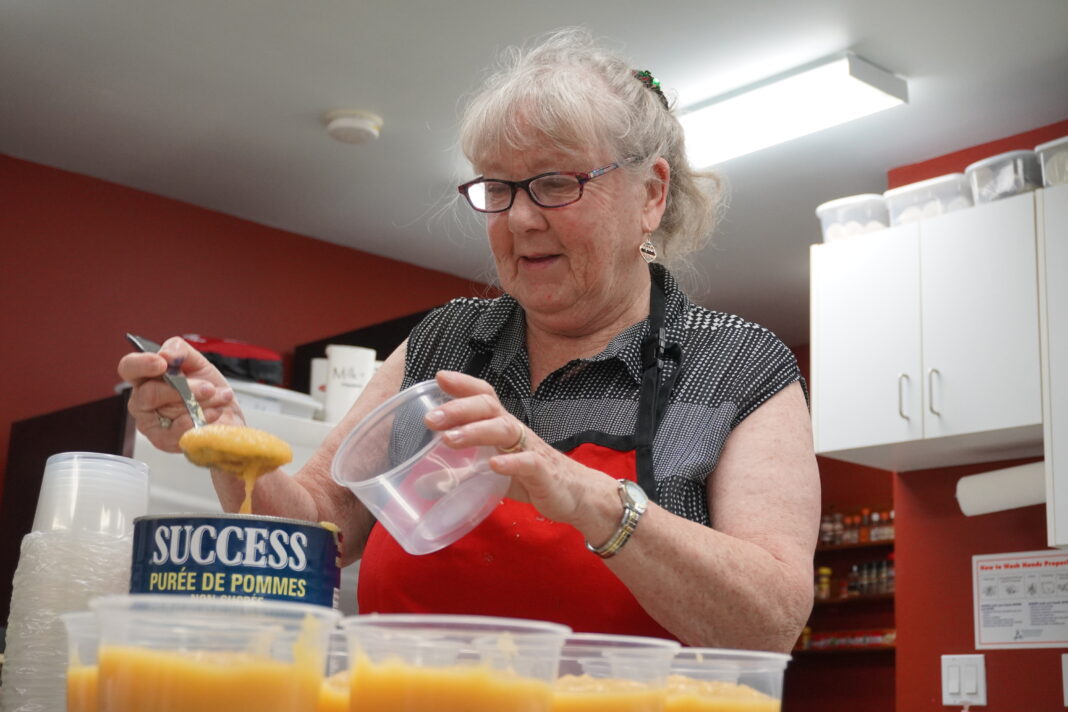 Downstairs, Joan Stoner is one of three women sorting groceries, clothes, and bulk foods. “I’ve been so lucky in my life. This is my chance to give back,” she said.

Each holiday season, dozens of fundraisers funnel non-perishable food or monetary donations to food banks across the Highlands. As volunteers such as Stoner prepare to distribute Christmas hampers, vouchers, holiday meals, and warm clothes, the 2022 festive season arrives alongside rising food and energy costs.

She said, on average, the centre had 176 visits every month in 2022. Last year, it was 158. She said more new people, who haven’t previously accessed food bank services, are coming through the doors. Judy MacDuff of the Haliburton 4Cs food bank said 20 new clients started regularly coming to the food bank in 2022.

The 4Cs will distribute food vouchers to 178 families and individuals Dec. 15. A letter to Minden Hills council from Don Veno, Minden Community Food Centre board chairperson, claims the centre has seen a 15 per cent rise in usership, with 800 local households accessing its services in 2022. Once non-perishable food donations arrive at the Minden Community Food Centre, they go into a storage area before being sorted by volunteers such as Sue Waite.

“I’m fairly new to the community,” Waite said, as she hoisted paper bags of food just donated by Dollo’s Foodland in Minden. “I thought it would be a good way to give back.” She added she’s enjoyed getting to know the other volunteers. Donated food is brought to “the pantry,” a sort of miniature grocery store separated into food categories.

“We do have a large variety of foods we try and cover,” Minden Community Food Centre manager Jean Munroe said. The grocery area, complete with a counter, shelves and lots of choice, is designed with the shopper in mind. Starches, produce, snacks and more are all separated into sections. “We don’t make them feel like they’re taking from us, we make them feel comfortable, we joke around with them,” Munroe said.

Other donations arrive through Feed Ontario, a provincial food bank charity, or other goods purchased, in part, with community donations. “It’s very important, and very timely, especially at this time that we have donations,” Munroe said. Meat, fresh produce and more gets stored until the kitchen crew upstairs puts it to use in carefully planned meals ready for pick-up. Up the staircase, the industrial kitchen buzzes to life each morning the centre is open.

Volunteers make about 15 or 20 sandwiches for local families each day. Munroe just started in her role in March, but said she’s found the community support motivating. “I’m proud to be part of a community that is so supportive and understands the need here,” she said.

Men’s jackets are a hot commodity at the Minden Community Food Centre.

“When we have them, they go out the door quickly,” said Stoner as she folded sweaters and jackets onto shelves.

Along with men’s clothes, Munroe said hygiene items such as razors, as well as sheets and towels are sometimes overlooked by holiday fundraisers. Jackson, in Wilberforce, echoed the call for items such as paper towels, deodorant, toothbrushes and laundry soap. “When people are at the store, these items are often the things that are skipped altogether,” Jackson said.

The Minden food bank is also on the hunt for childrens’ toys, especially ones geared towards kids aged 10-13.

Before the teams hit the ice, food bank board member and local business owner Brandi Hewson addressed the hockey fans, telling them about the increase in use and demand for help. “We appreciate, and desperately need, your support,” Hewson said.