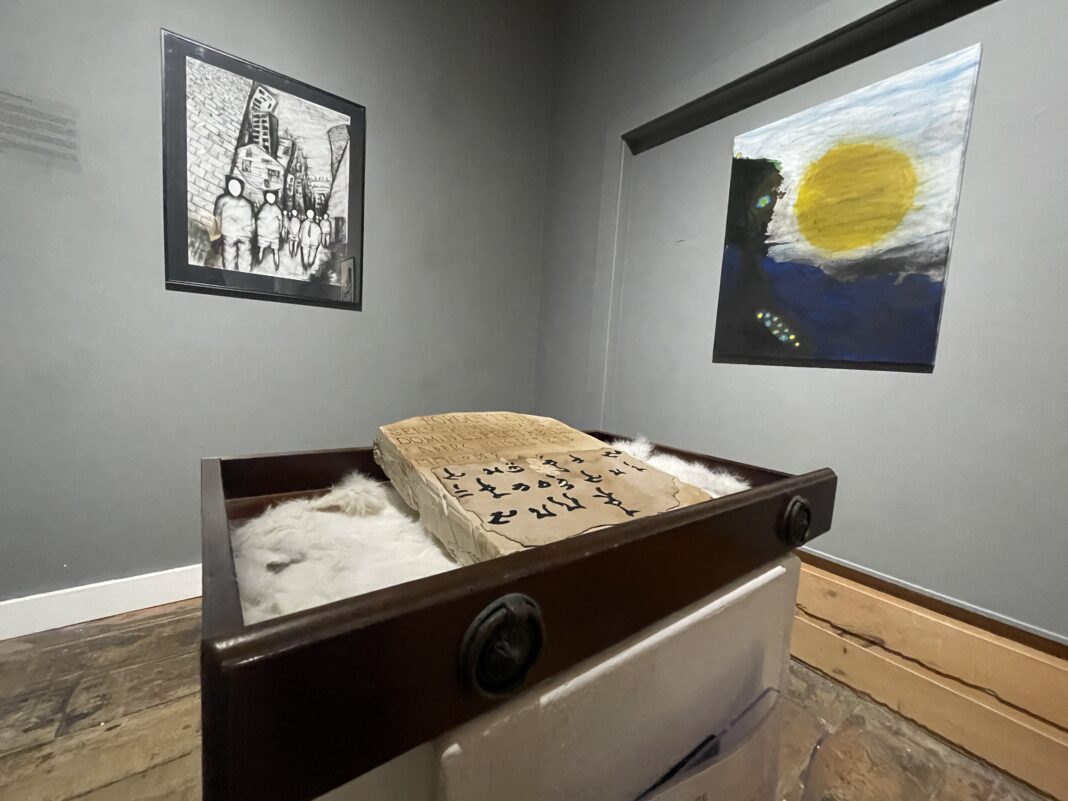 The Rails End Gallery and Arts Centre is serving up 11 moments of creative introspection, courtesy of the creative minds roaming the halls of Haliburton Highlands Secondary School. ‘Forgotten’ is a group art show planned, produced and presented by the school’s graduating class of artists, on display at the Haliburton gallery until Dec. 17.

The class decided on the theme together, after compiling images they found inspiring. “There were a lot of broken, abandoned objects, structures… and I was thinking we could broaden the idea, expand a bit,” said Riley Boermans.

He suggested ‘Forgotten’ as a unifying theme and it stuck.

Each student has crafted an original piece of art speaking to the idea. Boermans painted his grandfather’s rusted truck, lost amidst towering trees and grass.

Petric told The Highlander she found her final piece looked slightly different than she expected as she navigated colour and acrylic painting techniques.

Boermans, as well, chose a medium he wasn’t completely used to. He said painting, unlike drawing, was confusing. “Going from being able to put something on, and being able to [erase it] to once you put it on, it’s on, and you have to work around it,” he said.

The Rosetta Thing, by Lucas Wingell, is a three-dimensional piece inspired by the Rosetta Stone. “I was sort of ‘think of forgotten cultures.’ So, I thought of forgotten languages,” Wingell said. He incorporated carved letters from medieval Latin, Elder Futhark and the now-extinct Tocharian languages.

“These three scripts represent not only the ancient languages but also the forgotten people and cultures of the past,” Wingell wrote in his statement.

He questions what other languages might disappear as English becomes ever-more dominant throughout the world. For teacher Karen Gervais, the show is a chance to see her students’ work through a creative process collectively. “It’s neat to see it from the start, right from concept to development of the final work,” she said. “It’s definitely a bit of pressure we’re under, since it’s a pretty short timeframe, a semester.”

Students also had the chance to develop their own artists’ statements and present their work to friends, family and the public at a reception Nov. 25. “I think it provides good learning with reallife deadlines and sometimes having to burn the midnight oil. It always comes together in the end,” Gervais said. The Rails End Gallery is open Wednesday to Saturday.